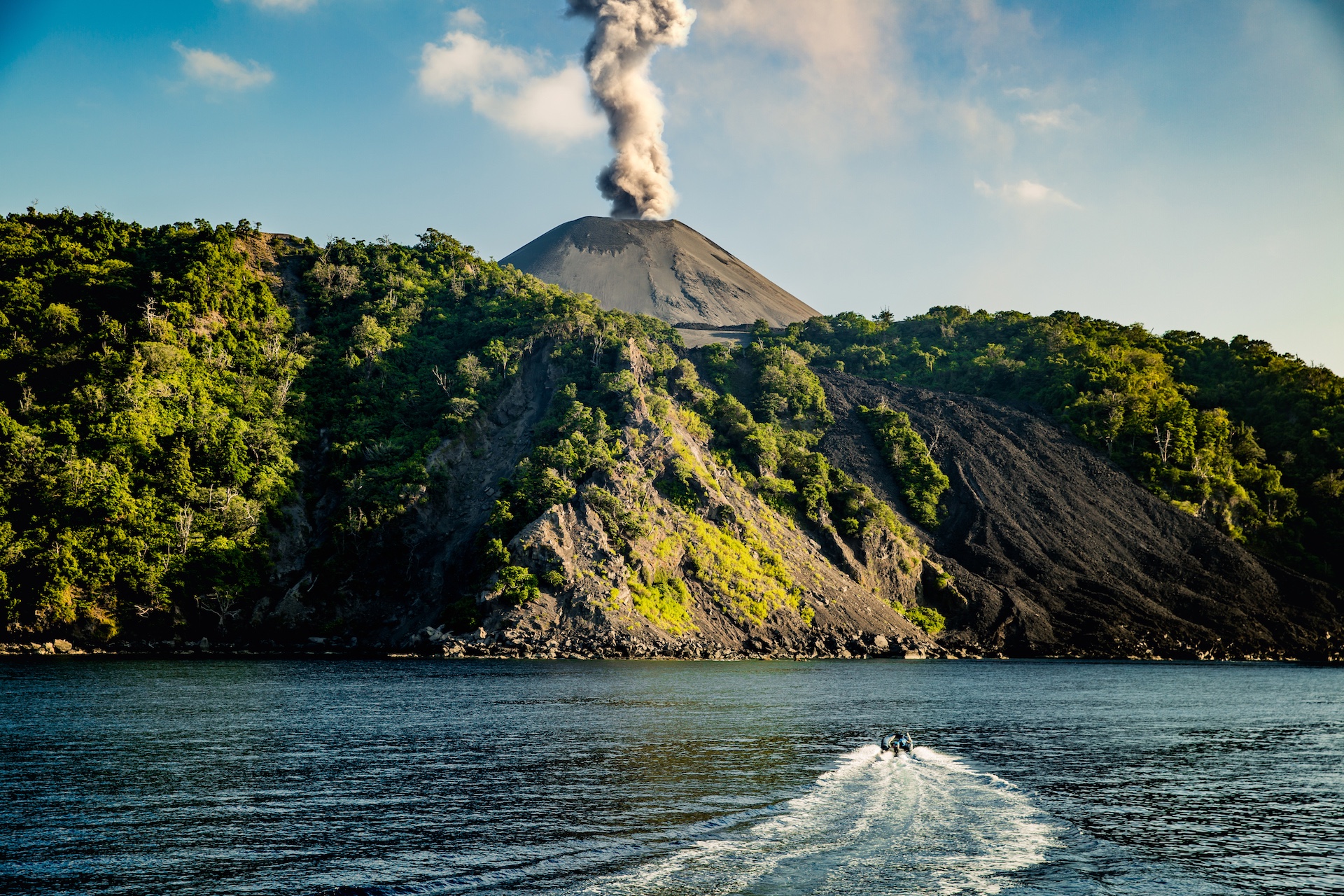 To dive at Barren Island, travel there on a fast boat from a nearby island for a day trip, or visit on a liveaboard ship that travels there for 2-4 days. Photo: Bhushan Bagadia Positives.

Rohin Unvalla is probably more at home in the ocean than on land. The PADI Master Scuba Diver Trainer and Instructor has lived and worked in the Andaman Islands since 2010 when he moved there from Bengaluru. A member of ANET (The Andaman and Nicobar Environmental Team), Rohin spends his time introducing people to the wonders of the ocean, and the importance of marine conservation. He has also dived widely across Southeast Asia.

So he knows what he’s talking about, when he says that Barren Island is among the most breathtaking dive spots in the world. Spread over about eight square kilometres in the Andaman Sea, the uninhabited island is crowned by Barren Volcano, which makes for an imposing sight. It’s even better underwater, where squadrons of manta ray glide past coral gardens and basalt caves carved by the currents. Barren island is uninhabited by humans, but experienced divers can explore its crystal-clear waters.  Here’s how:

When did you first dive at Barren Island? How was the experience?

I first dived there in 2015. At first glance, Barren Island looked nothing like the islands I was used to seeing. I could see the ever-present puff of smoke from the caldera and a distinct black lava flow from the middle of the island all the way to the base, reaching the water. Black sand and deep blue water – that was a spectacular sight!

It changed dramatically as we moved around the island underwater as fields of hard coral lay right under the contrasting black lava. There are carpets of soft coral on ridges starting 100 feet below the surface, steep walls and giant fan coral. Caves, both under and above, looked like ancient architecture, sloping or dropping off into the abyss. We spotted huge manta rays, schools of big eye trevally, the occasional shark (in the deeper parts), sea snakes, and a whole lot of reef fish starting at just one metre depth. Learning that the shape of the island is continually changing due to constant volcanic activity was fascinating.

The ever puffing caldera of Barren volcano, which last erupted in 2017. Photo: Rohin Unvalla.

How has this experience changed you?

Seeing the cliffs and drop-offs underwater at Barren, even without a huge flapping giant manta coming towards you, is the most humbling feeling. A sense of smallness engulfs divers and makes us conscious in a way that I could not have otherwise imagined.

How does one prepare for this expedition?

One needs to have at least 50 dives under one’s belt to take on this dive expedition. Every diver should be prepared to tackle currents moving in any random direction once underwater.

Barren Island has numerous caves, both above and below the water. Photo: Bhushan Bagadia Positives.

What are the challenges of diving in a place like Barren?

Getting permission from the administrative bodies is quite difficult. The best way to dive and explore it is off a liveaboard, staying close to the island for 2 to 4 days, but this is very expensive and time consuming. Another alternative is to get on an extremely fast boat from another island for a day journey that can be very tiring. However, once we are past these hurdles, the enjoyment and the wonder of diving at Barren Island makes every effort worth it!

What would you say to someone going there for the first time?

“Take me with you!” There are some sites we explored and perhaps discovered, so taking me would really be worthwhile! I would ask every individual to dive at Barren for its unique features and remoteness in the world, rather than for the sharks or the mantas.

Eating Out of Our Hands

did you know, wildlife facts