Whether in the grasslands, wetlands, or on steep snowy Himalayan cliffs, this high-altitude cold desert has a variety of animals and birds well adapted to sub-zero temperatures

“So are we inside the sanctuary yet?” I asked Salim, some three hours after we had left Leh. A large, ruddy-faced man with a permanent stubble, Salim was driving me and a young Ladakhi birder called Sonam Angmo on a four-day expedition into Changthang, the Indian portion of what is the highest plateau in the world. Sonam and I waited expectantly for an answer. But Salim only smiled — as placid as the landscape we were traversing, and as inscrutable.

It is hard to tell where the Changthang Wildlife Sanctuary begins. There is no ticket to be bought, no gate that marks entry, no visible fencing. That quality of vast borderlessness is reinforced by the nature of the terrain — some 4,000 sq km at altitudes ranging from 4,267 to 5,791 m, but almost all of it flat.

As you leave Leh and begin the climb towards Tanglang La (5,328-m- high pass), the air gets cooler, and the clumps of trees visible around Leh — mostly non-native species like willows and poplars, planted in recent years by the Forest Department — begin to disappear. Soon, you leave the gently curving mountain roads behind to enter the highlands of the Changthang Plateau. This is an unbroken expanse bifurcated only by the great Indus river, known in Ladakhi as ‘Singhe Khabaps’, literally, the river that flows ‘from the mouth of a lion’.

For much of the drive to the lake of Tso Kar, the road runs alongside the river. A ring of mountains stands guard over the silence: glittering snow-capped peaks forming the outermost layer, while steep rock faces in myriad colours rise up in the nearer distance. Between the road and the mountains is level ground — bare, sandy, and stony for large stretches, but punctuated by occasional marshy patches, where tufts of grass have made their way through the sodden earth. Fed by glacial streams or snow melt from the surrounding mountains, these high-altitude wetlands support a whole host of species, as well as being the lifeline of traditional communities in Changthang. 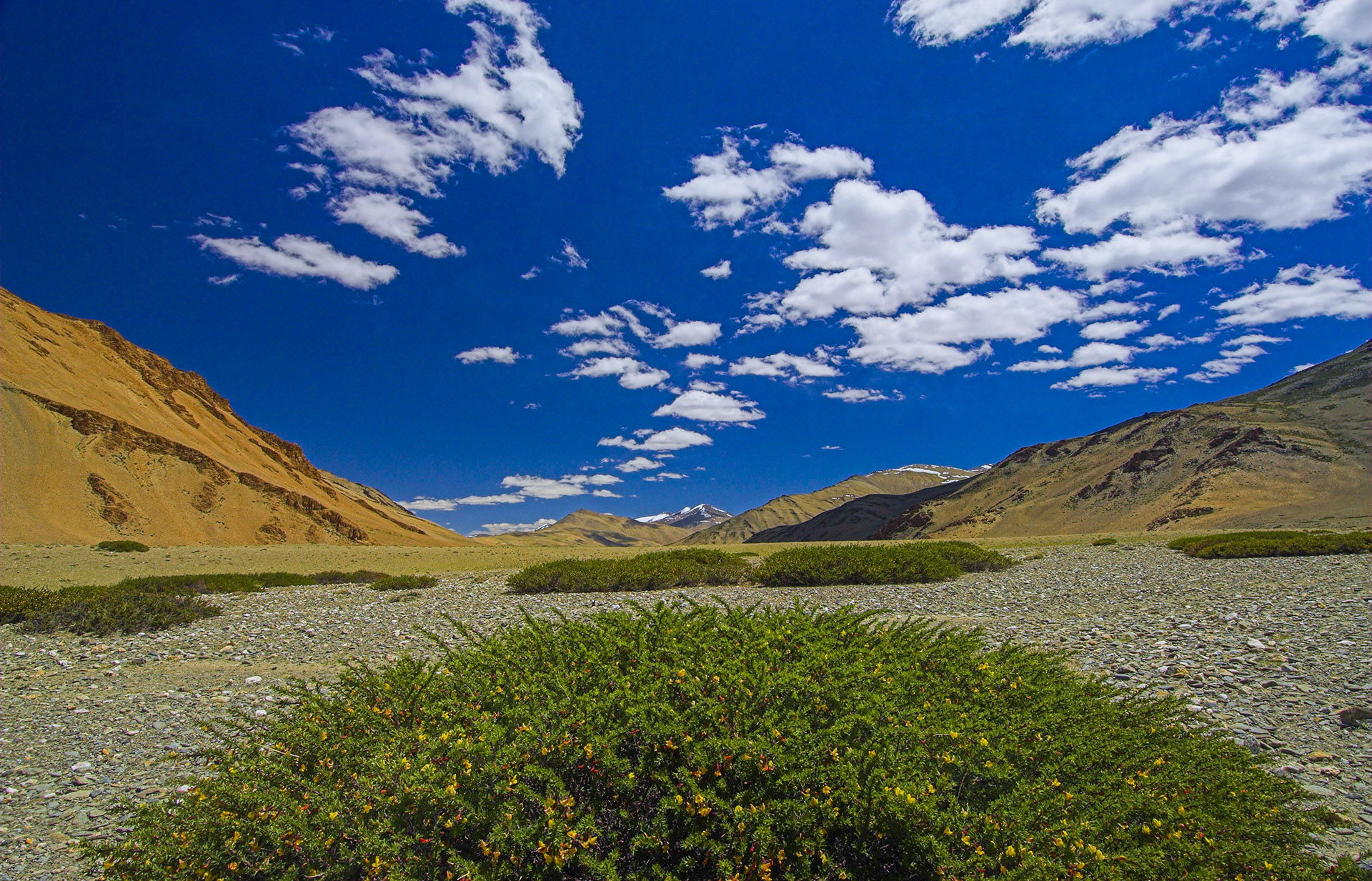 The cold high altitude plateau of the Changthang Wildlife Sanctuary may seem barren, but over 700 species of plants, 33 animal species, and close to 300 species of birds have been recorded there. The brown headed-gull (Larus brunnicephalus ) is a small seagull that is an unexpected visitor to the high-altitude lake of Pangong Tso, because it normally lives by the sea.

Since the massive success of the movie 3 Idiots (2009) and Jab Tak Hai Jaan (2012), two of these water bodies have become rather more touristed than before. The largest — and most visited by Bollywood-inspired Indian groups — is Pangong Tso, a 750-sq-km turquoise expanse that straddles India and China. Next comes Tso Moriri, 26 km long and 3 to 5 km wide, and the largest of Ladakh’s lakes entirely within Indian borders. The least-visited is the salt-encrusted Tso Kar, about 22 sq km and connected by an inlet stream to a smaller lake called Startsapuk Tso. Breeding ground for the black-necked crane, Tso Kar is edged by a small Changpa village with basic mud huts and two or three ‘hotels’. From Tso Kar you can drive southeast to Hanle, close to the Indo-China border.

WILDLIFE
Changthang is an unusual and harsh habitat: cold, arid, and largely treeless, with very little vegetation or water. At first glance, it is hard to imagine that there are living creatures here at all. But the plateau is home to several animals not found elsewhere in India, as well as some 300-odd species of birds, both resident and migrant. A lucky few may also spot some of Ladakh’s interesting insects, which include six species of large hawkmoths.

Birds: With huge lakes and marshes in the Changthang, it is an important destination for birders. Species like the black-necked crane, the brahminy duck (also called the ruddy shelduck), and the bar-headed goose breed in the area’s wetlands. Plenty of other birds are visible in the WLS, for instance, while driving between Hanle and Pangong Tso you may spot the golden eagle, common tern, black redstart, Tibetan sandgrouse, the little owl, the upland buzzard and the common merganser. 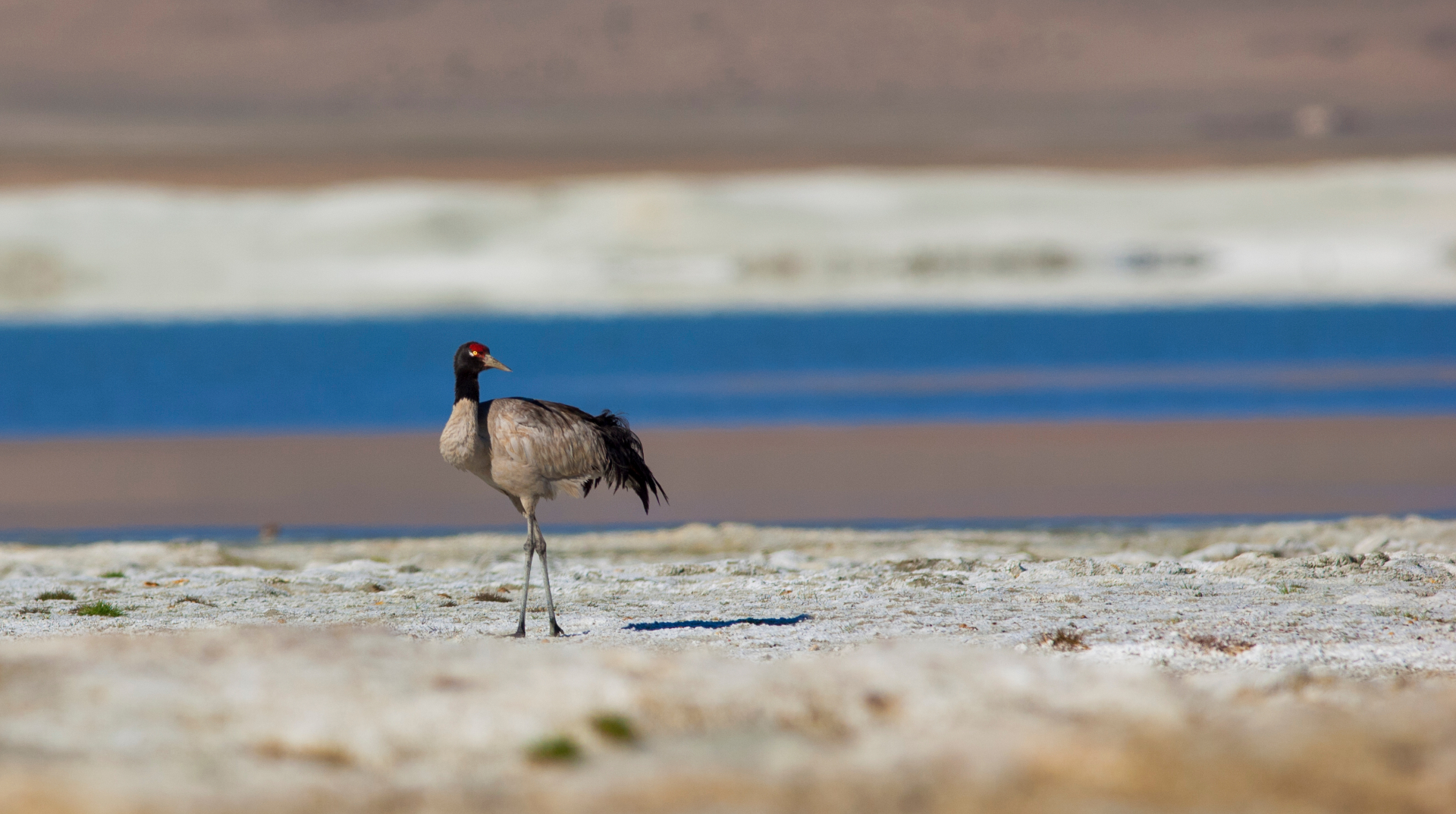 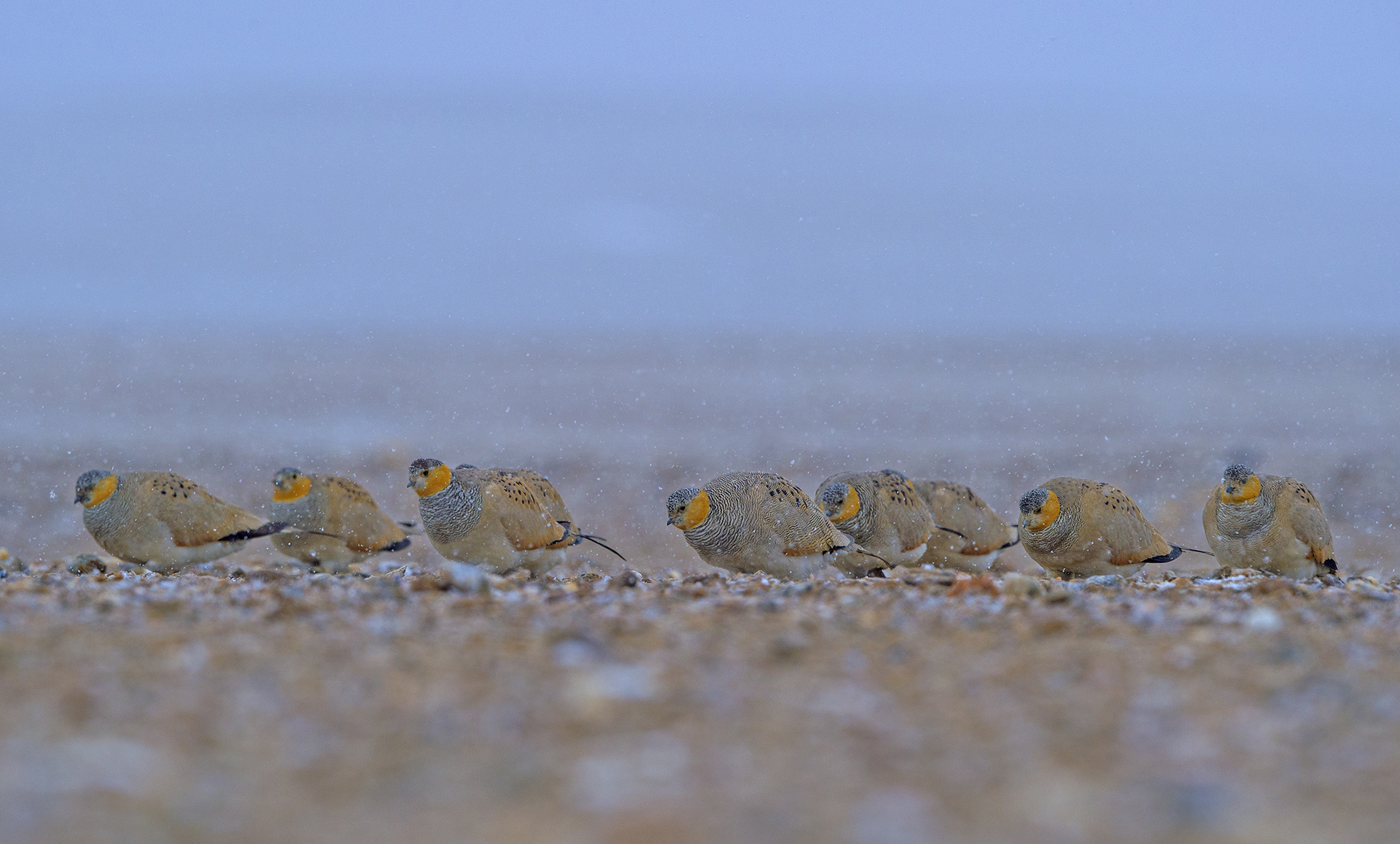 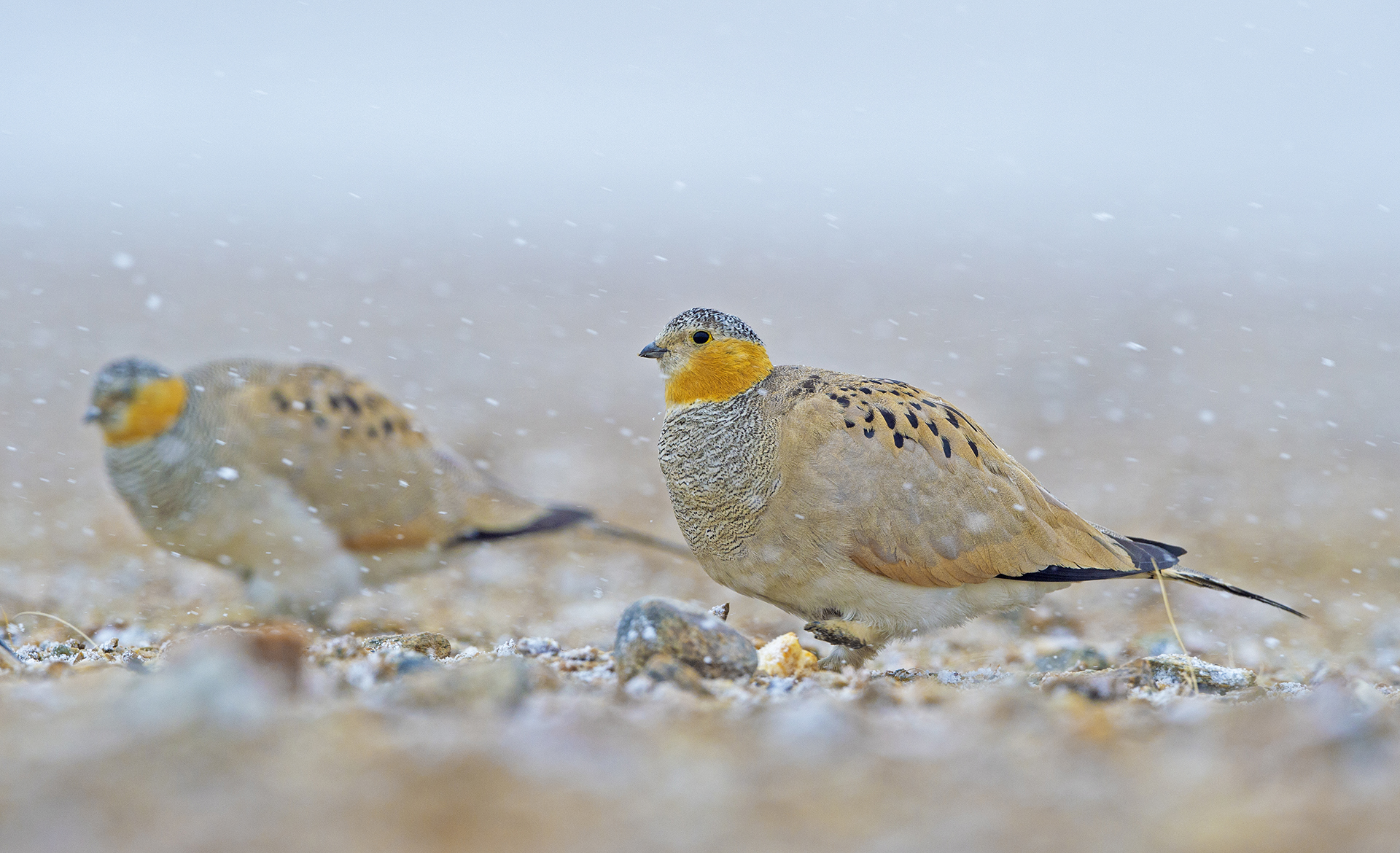 Tso Kar, a saline high-altitude lake, is the only known substantial breeding ground for the black-necked crane in India. Tibetan sandgrouses (bottom) are large birds, with small pigeon-like heads, that forage in flocks on the ground. They are rarely found anywhere else in Asia, outside of Ladakh.

Rodents: The grassy wet meadows support unusual rodents like the sand-coloured Himalayan marmot, the woolly hare, the Ladakh pika (a small greyish-brown member of the hare family), as well as a variety of voles (small rodent), all of which build burrows below ground.

Ladakh pikas are furry animals that look part-rodent, part-rabbit. They live in family groups in the Changthang, in burrows which have multiple entrances to allow for easy escape and entry.

Ungulates: Ungulates, hoofed mammals, are also aplenty. The most common is the kiang or Tibetan wild ass, once hunted for sport, but growing steadily in numbers since it was protected. You might also spy the bharal or blue sheep, whose coat changes from bluish-grey in Ladakh’s snowy winters to reddish in summer, allowing it better camouflage against the rock face (there are about 11,000 bharal in Ladakh). At higher elevations you might spot the Asiatic ibex, a stocky rock climber of a goat, with ridged, backward-curving horns; these horns are often spotted at the entrances of Ladakhi homes and monasteries as an auspicious symbol. Rarer ungulates include the Tibetan antelope, locally called chiru, the Tibetan urial, among the world’s smallest wild sheep (an estimated 2,500 survive), and the Tibetan argali, the world’s largest wild sheep (whose population has fallen to 300-400). 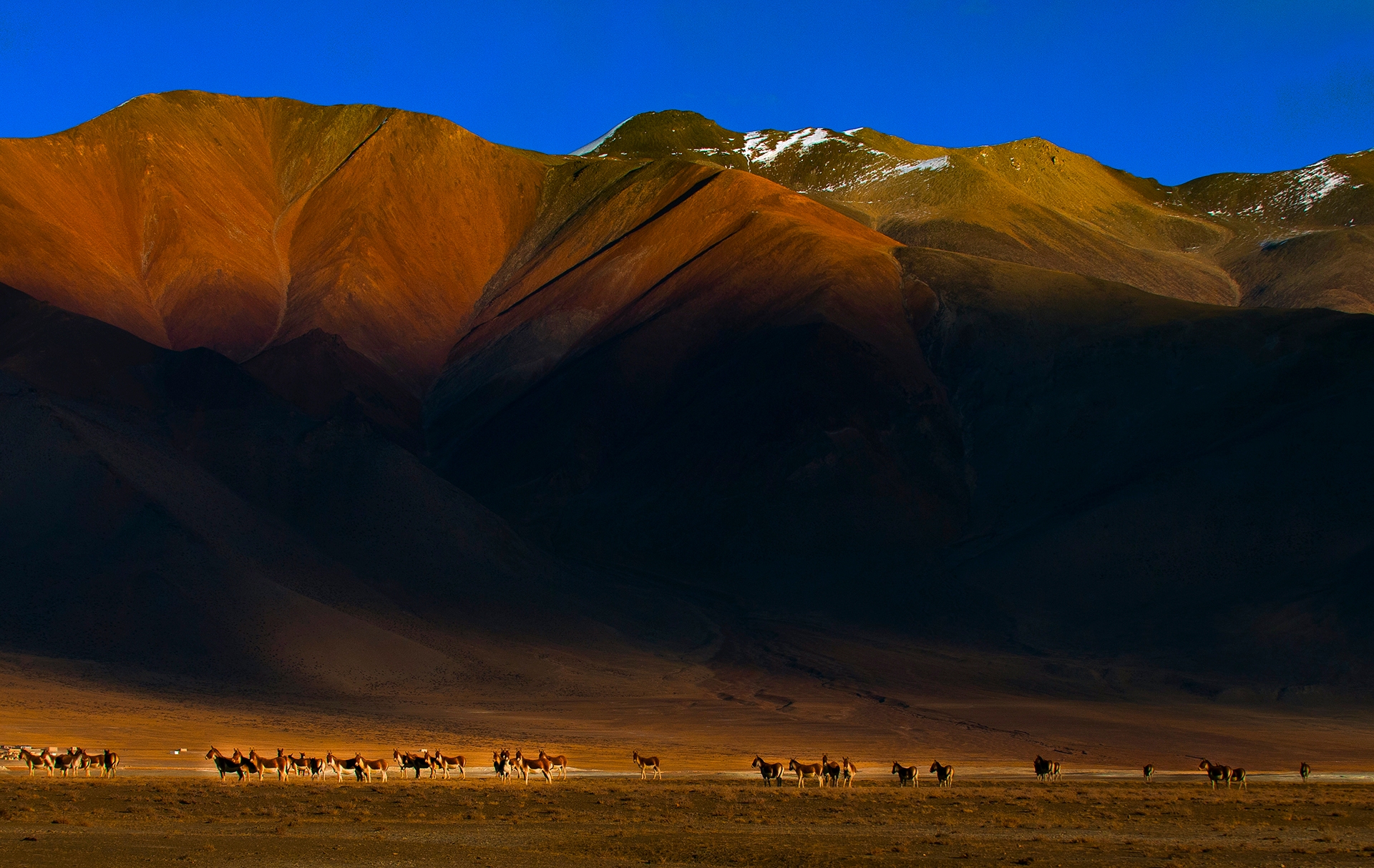 Western kiang, a species of Tibetan wild ass, are found in Spiti, Himachal and Ladakh, often near marshes or wetlands. When driving through the Changthang region, herds of them can be spotted — unmistakable as they are with their massive heads and short, brownish-black upright manes. 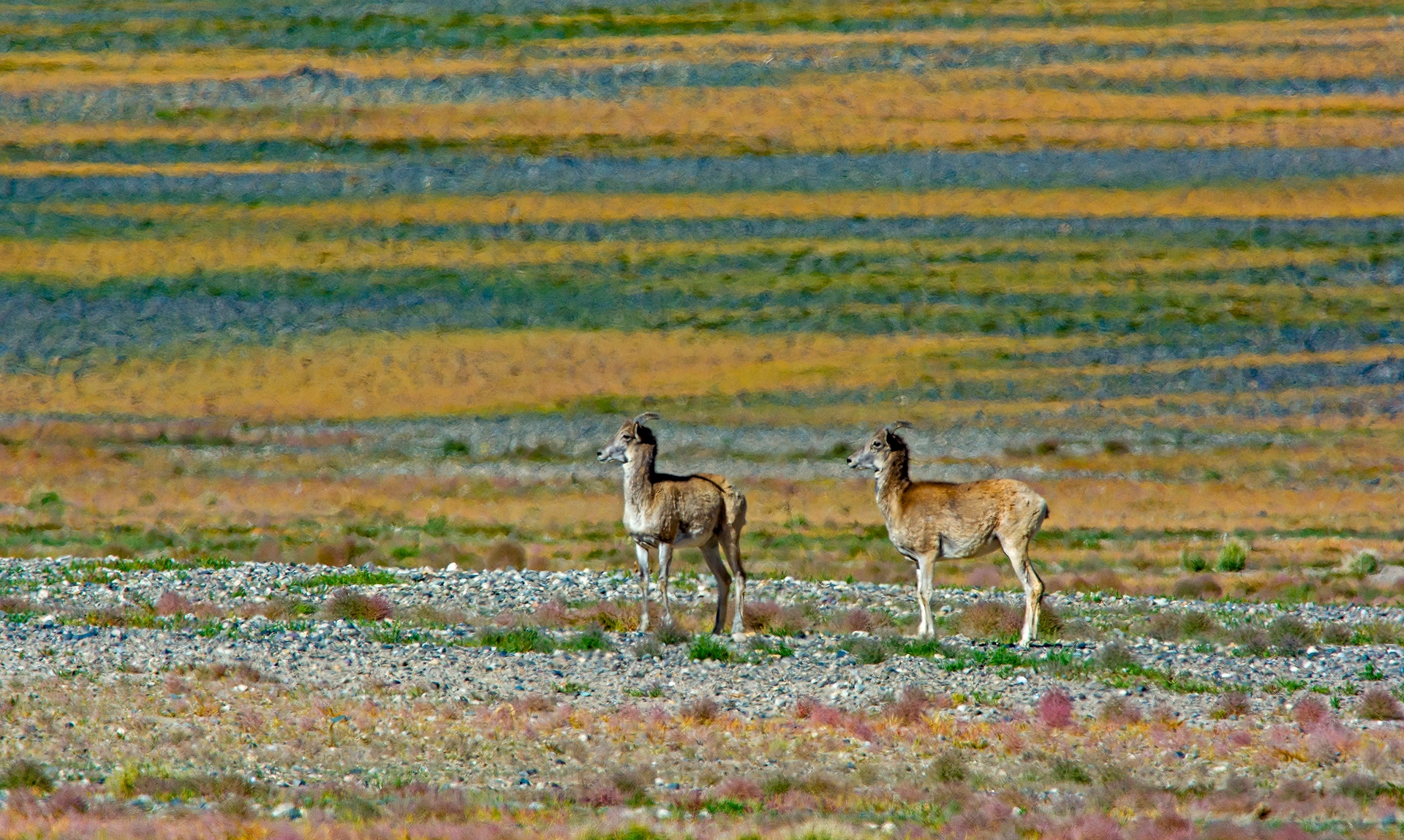 Only about 300-400 Tibetan argali, the largest of all wild sheep, remain in Ladakh, mostly in the eastern Changthang region.

Predators: All these grass-eating animals are food for predators. In ascending order of size, there’s the hard-to-spot Pallas’s cat (a deceptively furry nocturnal hunter of voles, pikas, and marmots), followed by the red fox (the predator you’re most likely to see), the rarely spied lynx with its distinctive triangular ears, the Tibetan wolf, and Changthang’s top predator: the snow leopard. The last is so perfectly camouflaged in its rocky terrain that it is sometimes called ‘the ghost of the mountains’.

Active at night, the red fox is mostly a loner, at best roaming in mating pairs, in the sandy wastelands and sand dunes of the semi-arid Changthang.

Reptiles: Several reptiles are known to live in this cold desert, but only the toad-headed agama (Phrynocephalus theobaldi) has been spotted with any frequency by visitors, and mostly near Hanle.

Uniquely genetically adapted to live in the unforgiving cold of the Changthang region, the toad-headed agama is often found near water bodies, spending a fair amount of the day sunning itself on rocks.

SEASON
In the freezing winter months, temperatures in Changthang range from −5 to −35 degrees C. First-time visitors to Ladakh may find it best to stick to summer for a visit, unless undeterred by extreme cold. Peak summer (June-August) temperatures can go up to a maximum of 30 degrees C, but nights and early mornings are often quite chilly even then, requiring a sweater, a jacket and warm socks. 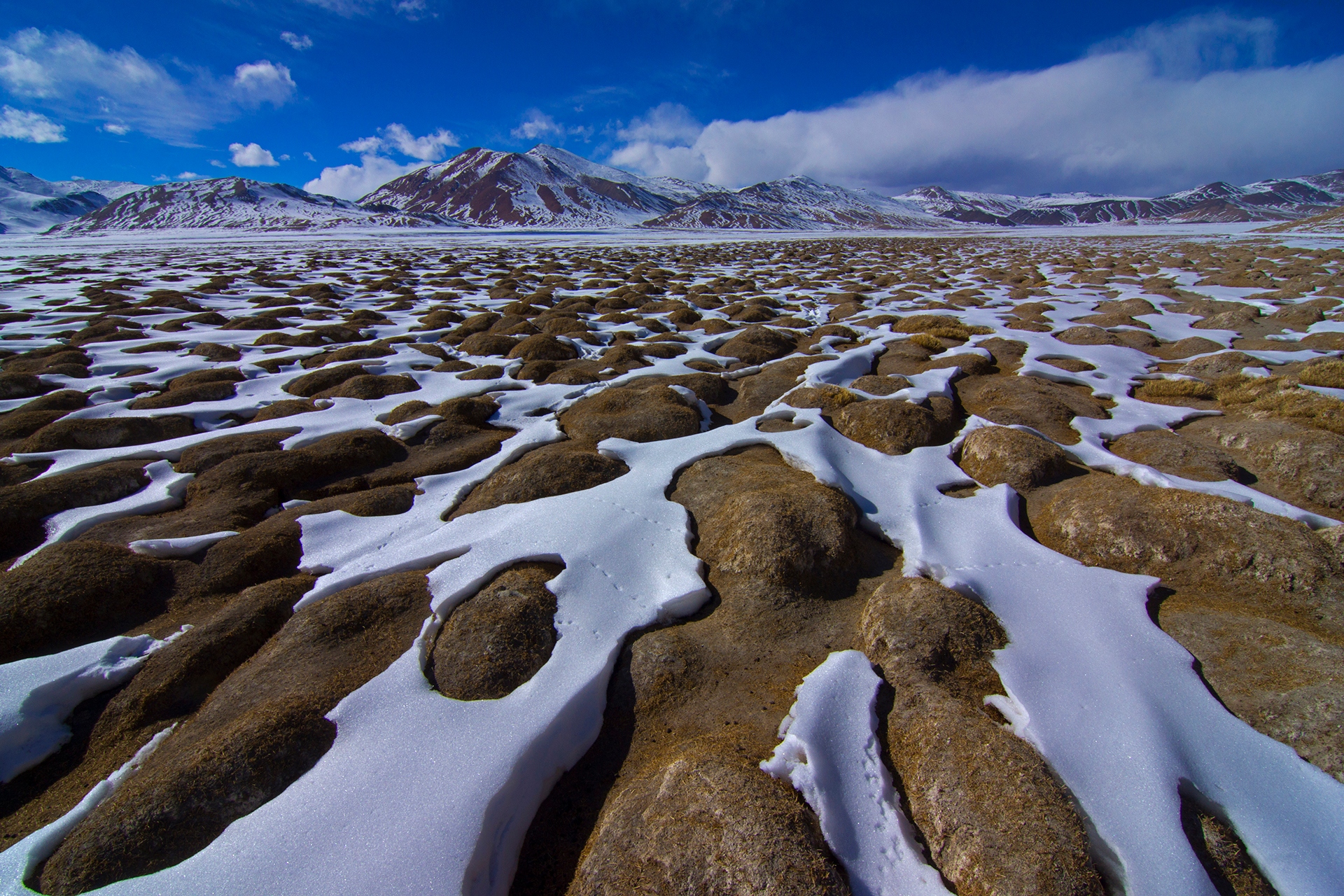 Winter in the Changthang is unbelievably cold, but life goes on for the local Changpa nomads who look for patches of grass under melted snow to graze their pashmina goats.

To travel to the Changthang Wildlife Sanctuary you will need to either hire a taxi by yourself or take an organised private or group tour with a travel agent. For the former, there are fixed rates on taxis provided by the taxi union and displayed on boards outside the taxi stand in Leh (Tel: 01982-252723, 253039, +91 9419178223).
Tours are often planned to take visitors to the three main lakes: Tso Kar, Tso Moriri, and Pangong Tso. For exploring the wildlife of the region it’s best to go with an operator who specializes in nature and wildlife-based trips. In Leh, Imran at Frozen Himalayas (Tel: 8803425502) can help with car hire and wildlife-focused itineraries. Harish Singh Bisht (harish17semite@gmail.com) is a freelance tour organiser, who helps with nature-focused trips.
Note that you will spend a lot of time in your vehicle (at least 6 hours per day) and though distances seem short you can only expect to cover around 30 km per hour at that altitude and terrain.

SAFARI COSTS
For a four-day exploration of the Changthang Wildlife Sanctuary that includes Tso Kar, 153 km from Leh, and then Hanle, 145 km from Tso Kar, and back to Leh, expect to pay around Rs 40,000 for an SUV (includes petrol, inner line permit, and driver’s fees).

GUIDE
Though you can visit Changthang without a guide, it is a vast and relatively unexplored area, so a local driver and naturalist help ensure sightings of the region’s unusual and often well-camouflaged animal and bird life. Lobzhang Visuddha runs Ancient Tracks offering several animal-focused trips, and the Birds Club of Ladakh (Tel: 9419862542) also has naturalists. He can also help put you in touch with local naturalists. Expect to pay a full-time guide who accompanies you Rs. 3000 or more per day, plus food. Many hotels and homestays will arrange free lodging for guides and chauffeurs on request. Local guides at Han Le or Tso Kar might occasionally be found through homestay owners for Rs. 600 per day.

Tso Kar: At Thukje near Tso Kar, Tso Kar Eco Resort has double rooms with attached baths for cost Rs 2,500 per night. Rates are high for the rooms on offer, but somehow more appealing in the freezing cold than the otherwise attractive-looking tents at Lotus Camp (lotuscamptsokar.com). Alternatively, try Jigmet (tel: 94196 58740 or 6005505416) for rooms at Tso Kar Resort. For more basic options: a friendly homestay a 10-minute-walk along the main road from Tso Kar Eco Camp; Tsepal Guest House (9906060654); or Tibetan Argali Homestay in Thukje village, a little up the hill near the monastery.

Tso Moriri: Expect to pay up to Rs 3,000 for a double room with attached bath and hot water (bucket not geyser) at Tso Moriri Camp and Resort. For a cheaper, more homely option under Rs 1,000 a night, try the family-run Goose Homestay in Korzok village on the lakeshore.

Hanle: The long-running Padma Homestay (94692 24302, 94198 34944) at Hanle is super-efficient, with the eponymous Padma and her husband Sonam Dorjay providing guests a warm welcome. A double room with attached bath (buckets of hot water on request) is Rs 2,000 a night, inclusive of simple home-cooked meals in the cosy dining area.

• Factor in 36-48 hours of rest upon arrival in Leh for high-altitude acclimatisation, before you can proceed to the Changthang Wildlife Sanctuary. High altitude headaches and nausea are a real thing.
• Even at the height of summer, prepare for cold weather and frequent rain. Afternoons can be hot and sunny, and fans are non-existent.
• Travellers to Changthang require an Inner Line Permit. Get it through a tour operator or on your own online (http://lahdclehpermit.in/)
• Keep silent so you hear and see more. Maintain a respectable distance from wild creatures even if you really want that perfect photograph, and don’t disrupt or feed them.