It is around 3 pm and the golden rays of the winter sun light up the forest and dispel the last of the morning fog. The forest buzzes with the sound of myriad insects and birds. While driving in our open jeep, bumping down an arterial road, we spot Pavitri walking on the main road.  The tawny tigress lopes around like a beauty queen walking the ramp, marking her territory, occasionally looking behind. Our naturalist and spotter had noticed pug marks, and with the help of the warning calls of langurs and barking deer we’d managed to reached her. We were in Kishanpur Wildlife Sanctuary, in Uttar Pradesh, part of Dudhwa Tiger Reserve.

In the 1960s, the 212 sq-km sanctuary called Dudhwa was created to protect swamp deer. In 1977, the area was declared a national park with a core zone of 490 sq km and a buffer zone of 124 sq km.  In 1987, the park was brought under Project Tiger with the addition of the 201 sq-km Kishanpur Wildlife Sanctuary. In the early half of 2000, Katarniaghat Wildlife Sanctuary (400 sq km) was also included within Dudhwa Tiger Reserve.

The marshy grasslands of Dudhwa Tiger Reserve are interspersed with rivers, shallow lakes, and swamps that create a lush green landscape and provide fresh water all year round. (Top) Jhadi taal located in Kishanpur Wildlife Sanctuary is a safe haven for numerous species from (top) the swamp deer. (Above) Herds of elephants can be seen in Banke taal inside Dudhwa National Park.

The habitat in Dudhwa Tiger Reserve is mostly densely covered forests with trees like sal and teak interspersed with swamps, taals (shallow lakes), and grasslands called phantas.  Its mix of ecosystems harbours tiger, sambar, cheetal, hog deer, swamp deer, sloth bear, rhino, leopard and elephant. It is also a birder’s paradise with over 400 bird species, from owls and storks to six species of vultures, drongos, and hornbills. Its location at the foothills of the Himalayas makes it a prime spot for migratory birds en route to distant destinations between November and March. Two river systems flank the reserve, the Sharada and its tributary, and the Geruwa, Suheli, and Mohana streams which are tributaries of the Ghagra river. They contribute to the forming of wetlands, dense forests and grasslands which make this a great spot for biodiversity.

Long ago, Dudhwa was a terrain of marshes and grasslands, and hunting country for royals. Many of its grasslands were cleared down the ages to grow sugarcane. Dudhwa Tiger Reserve owes its existence to the famed hunter-turned-conservationist Billy Arjan Singh. He was a hunter who repented his act one day and turned conservationist, introducing a few zoo-born tiger and leopards back into the wild.

Driving through recently harvested sugarcane fields and bright yellow mustard fields we arrive at Kishanpur. We see majestic vultures, falcons, and other birds soaring high in the sky. Near waterbodies we see pied kingfishers and lots of teals, egrets, jacanas, coots, pintails, pochards, mallards, and shovellers. Our naturalist also points out orioles, barbets, and greater racket-tailed drongo. The sanctuary is famous for its population of barasinghas (swamp deer), but due to rampant hunting and habitat loss this species is declining. 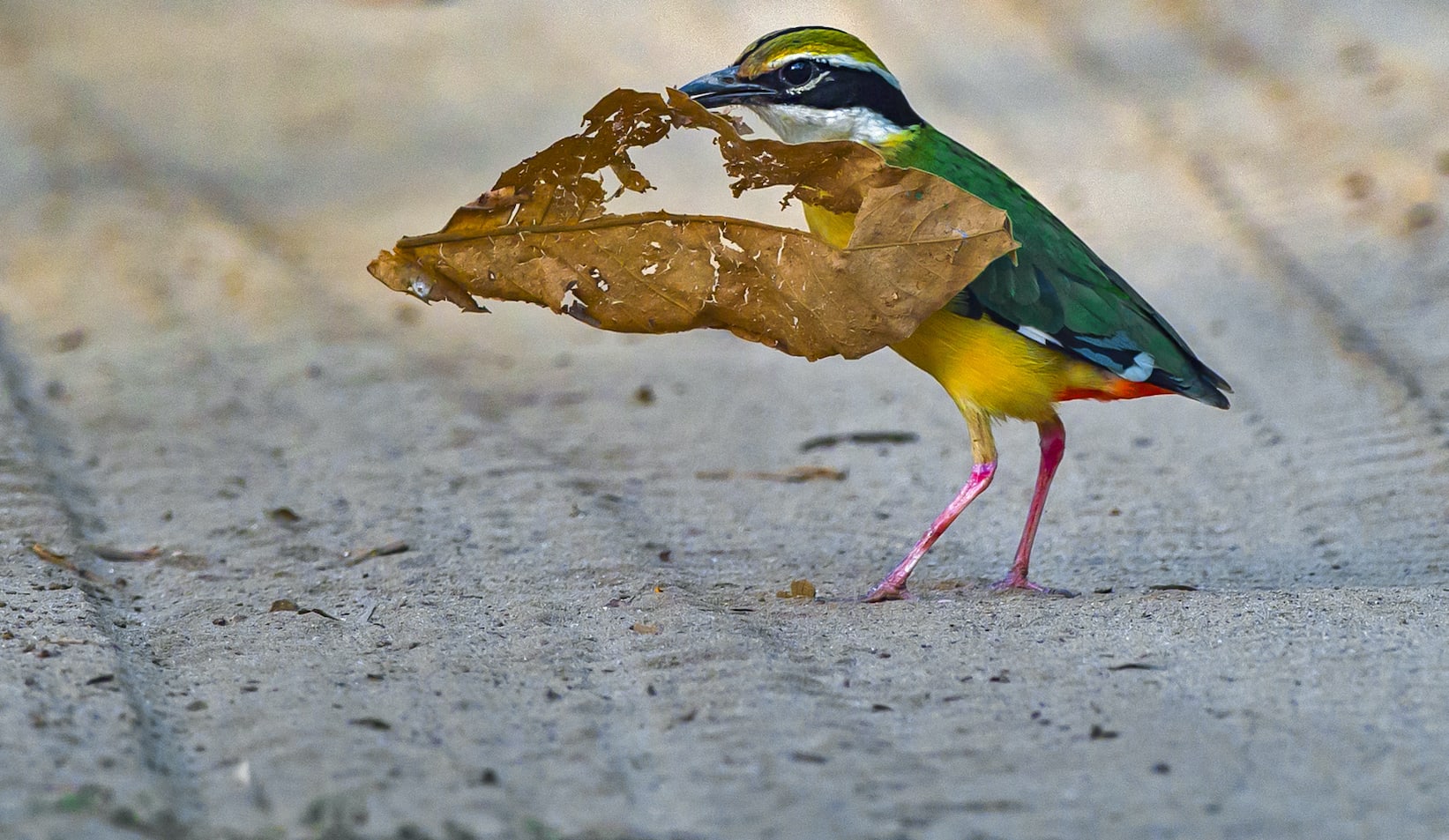 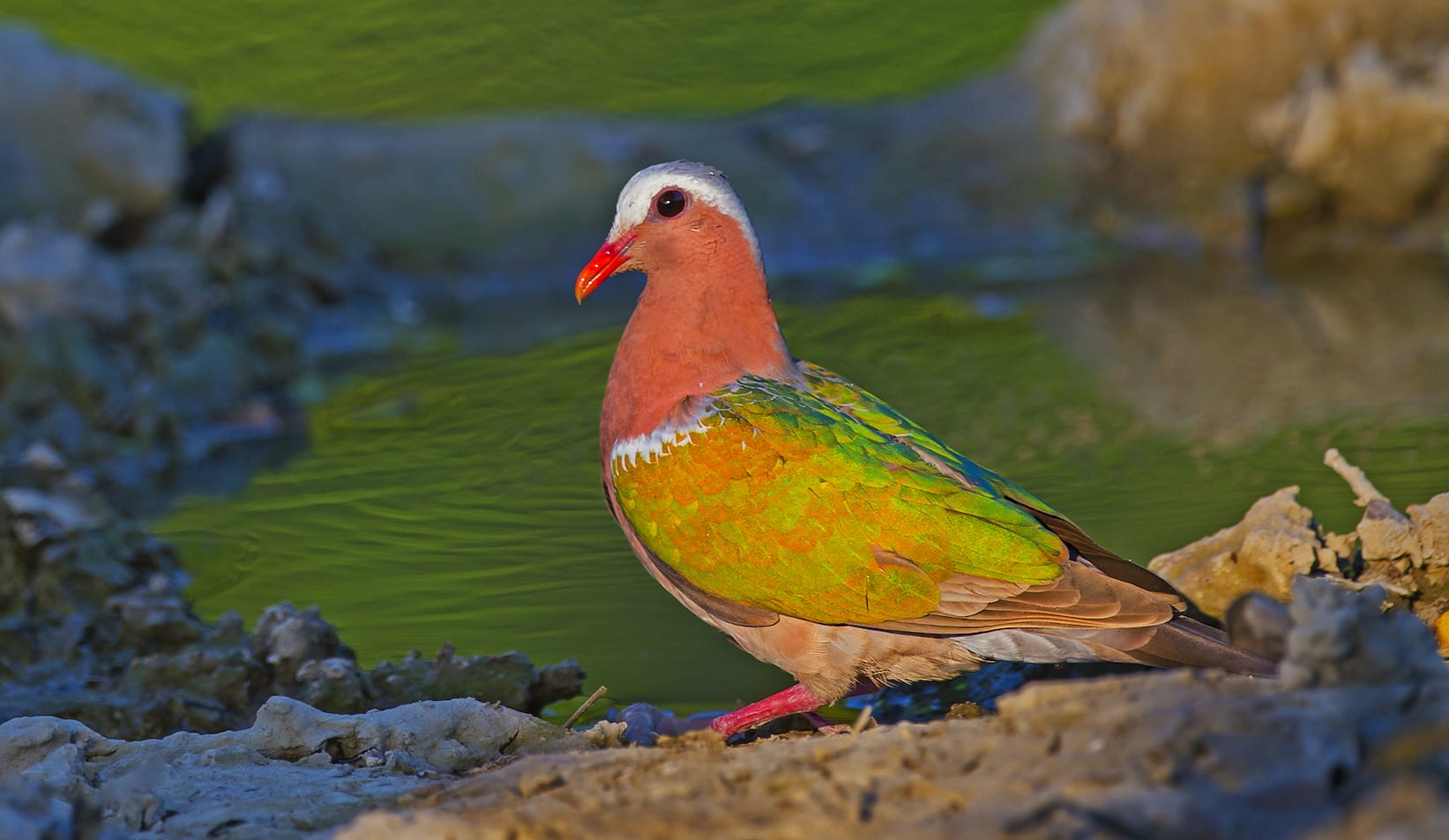 The diversity of habitats in Dudhwa — grasslands, wetlands, and thick sal forests — invite a variety of species of birds, a blessing for birdwatchers. Birds such as the (top) peacock, (above left) Indian pitta, and (above right) emerald dove are easily spotted.

Another part of Dudhwa is Katarniaghat, a sanctuary bordering the Geruwa (tributary of Nepal’s longest river, Karnali).  It has sal and teak forests and numerous swamps and wetlands, and is the perfect habitat for gharials. We hire a motorboat and go downriver, passing overhanging trees, Indian soft shell turtles on rocks, and sandbars in the middle of the river with gharials sunning themselves on them, their distinctive snout and pot like bump clearly visible.

The reserve is also famous for its prolific snake population: banded kraits, Burmese rock pythons, yellow-spotted wolf snakes, and paradise flying snakes. Gliding around a narrow inlet in the river, we spot an Indian rock python.  The Gangetic dolphin can often be seen here as well.  Our naturalist tells us that this is also the habitat of the elusive jungle cat, which he has spotted here on several occasions.

As we drive through lush vegetation, lined with jamun and silk cotton trees, we spot more of the sanctuary’s rich birdlife from greater adjutants to kingfishers and paradise flycatchers. 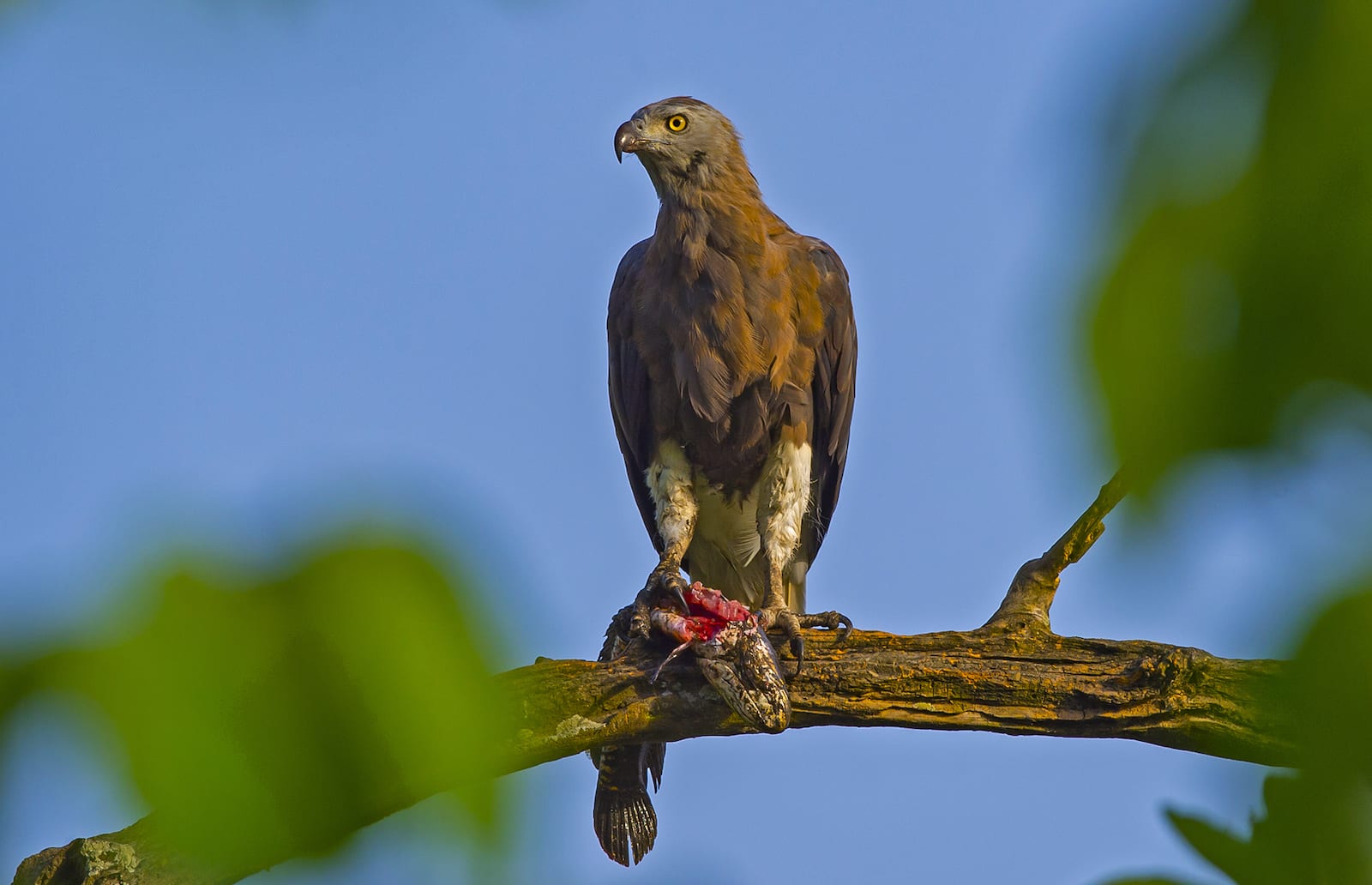 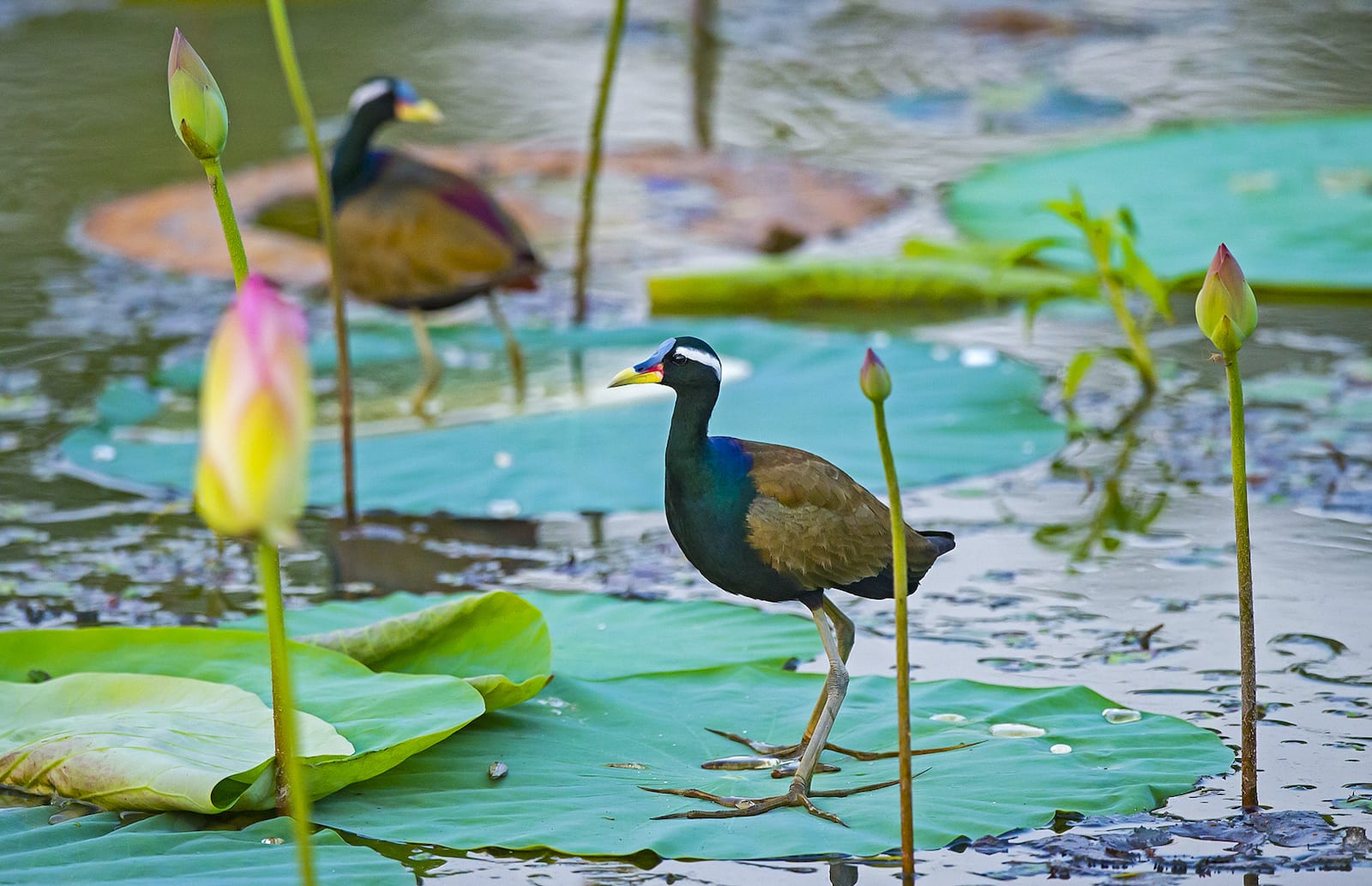 The swamps and taals of Dudhwa Tiger Reserve attract a range of waders and raptors. (Left) A grey-headed fish eagle patiently keeps an eye out for prey from its perch above a taal. (Right) The bronze-winged jacana forages among water lilies and lotuses.

One of the star attractions of Dudhwa National Park is the Indian rhino or greater one-horned rhino (Rhinoceros unicornis), introduced to Dudhwa in 1984-85 from Assam and Nepal under the Rhino Rehabilitation project.  We take an early morning safari from the park’s main gate through the jungle, along sal trees, thick undergrowth, and tall grasses to spot the rhino. When we finally reach the savannah like grasslands, we catch sight of a mother and calf rhino walking through tall grasses and then disappearing into the morning mist. It’s a magical moment that remains imprinted on my mind.

Tharu village visit Tharus are the local tribe living in about 40 villages in and around these forests. Travellers can meet them and visit their eco-friendly homes, made of out of mud, straw, and manure, and complete with huge mud containers for storing grains.

Frog temple From Dudhwa National Park you can visit the Frog Temple at Oel, 12 km from Lakhimpur. This temple, dedicated to Lord Shiva, was built in 1860 by the former king of Oel. It is built on a large stone sculpted into a frog.

By Air: Lucknow airport is 238 km from Dudhwa.

By Train: Dudwa (4 km) and Palia Kalan (14 km) stations are closest to the Dudhwa reserve’s gate but only Passenger trains halt there. For Express trains, the closest station is Shahjahanpur (about 105 km away).

Visitors require a permit to enter each of the different sanctuaries which can be obtained at the gate of each park. Entry fee at Dudhwa (Indians Rs 100; foreigners Rs 800) and at Kishanpur and Katarniaghat (Indians Rs 50; Rs 600 foreigners).

A private guide costs Rs 500 at Dudhwa and Kishanpur and Rs 1,000 at Katarniaghat.

Boat fees at Katarniaghat is Rs 2,100 per hour.

Safaris can be booked online at dudhwa.co.in or at the gate of the park on the same day. A jeep that takes six costs Rs 4,800. 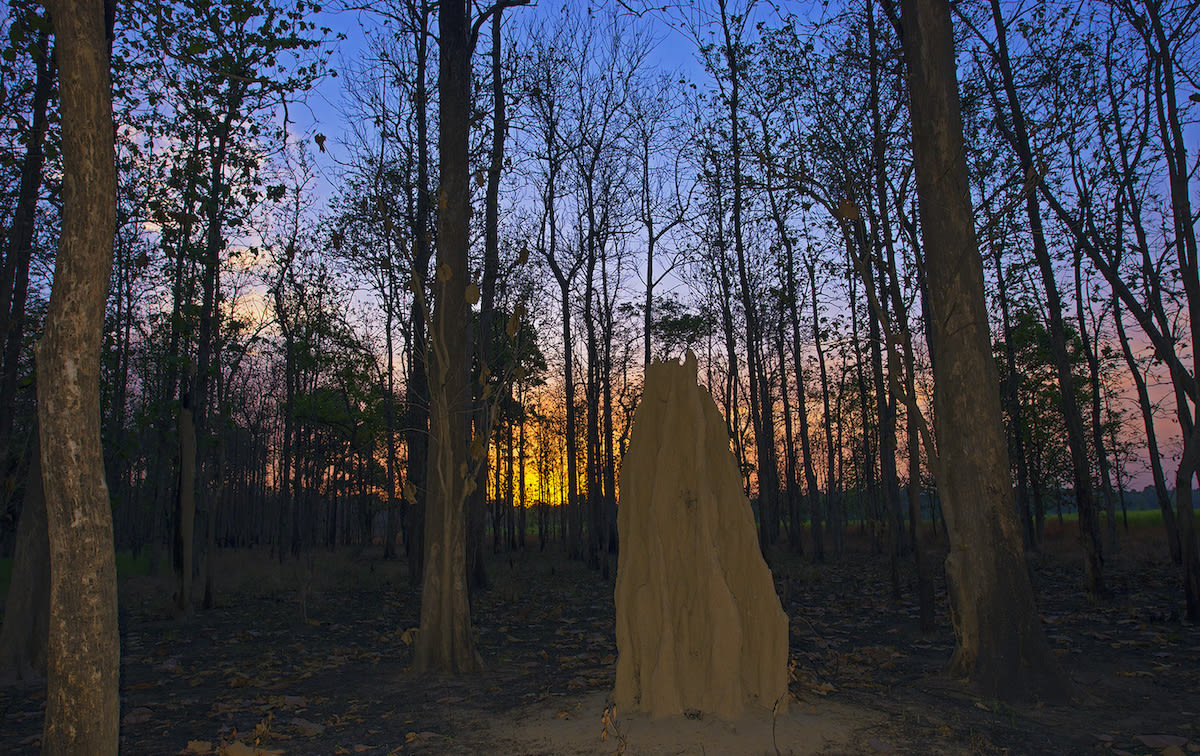 Termite hills are architectural masterpieces — armies of termites get together to combine fine particles of soil with their saliva and faeces to build these forest wonders. Several large ones are seen in the sal forests of Dudhwa. 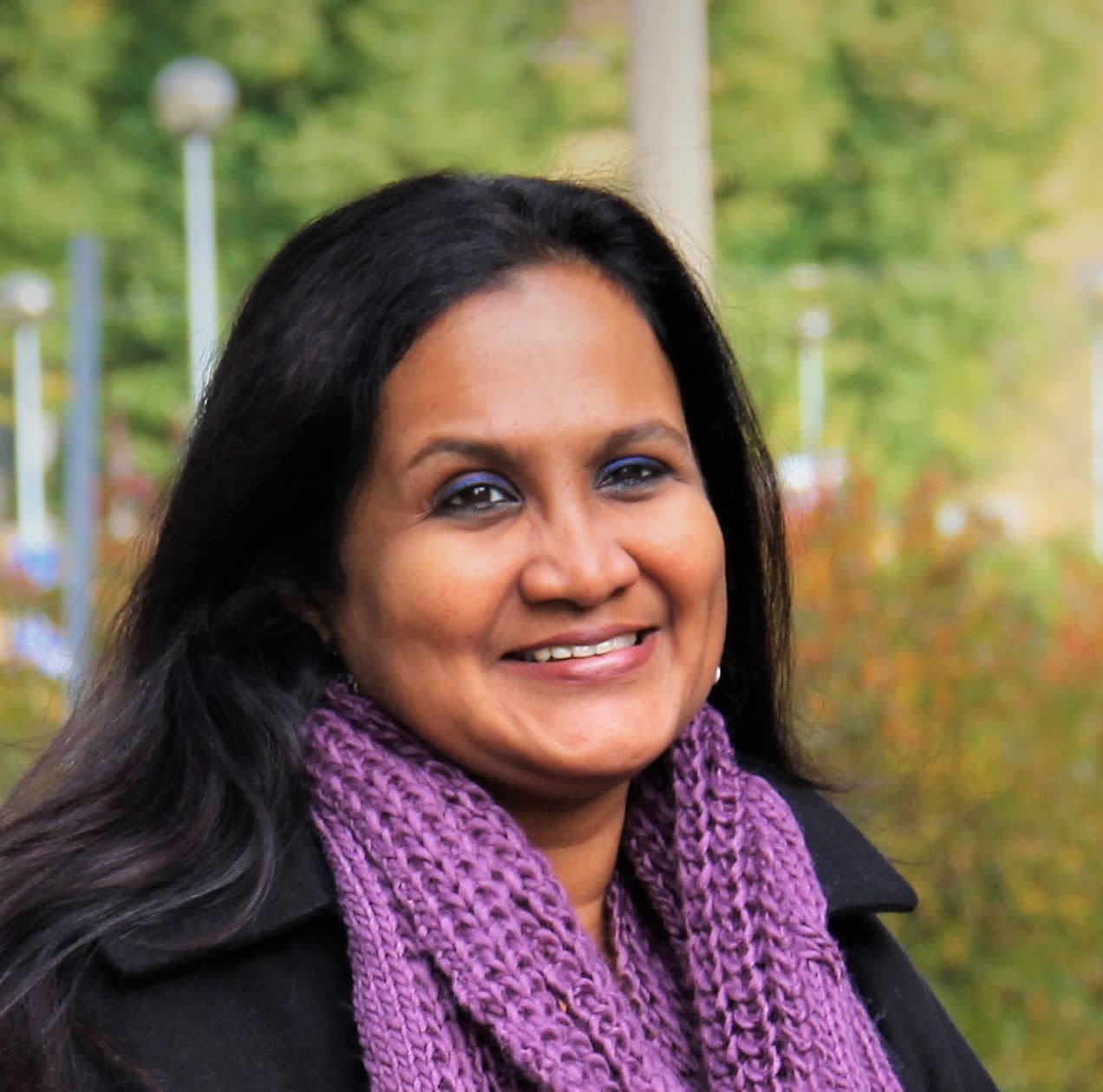 is a Chennai-based independent journalist. She writes on travel, environment, architecture, lifestyle, food and has been published by the Guardian, SCMP, the National Geographic Traveller among others