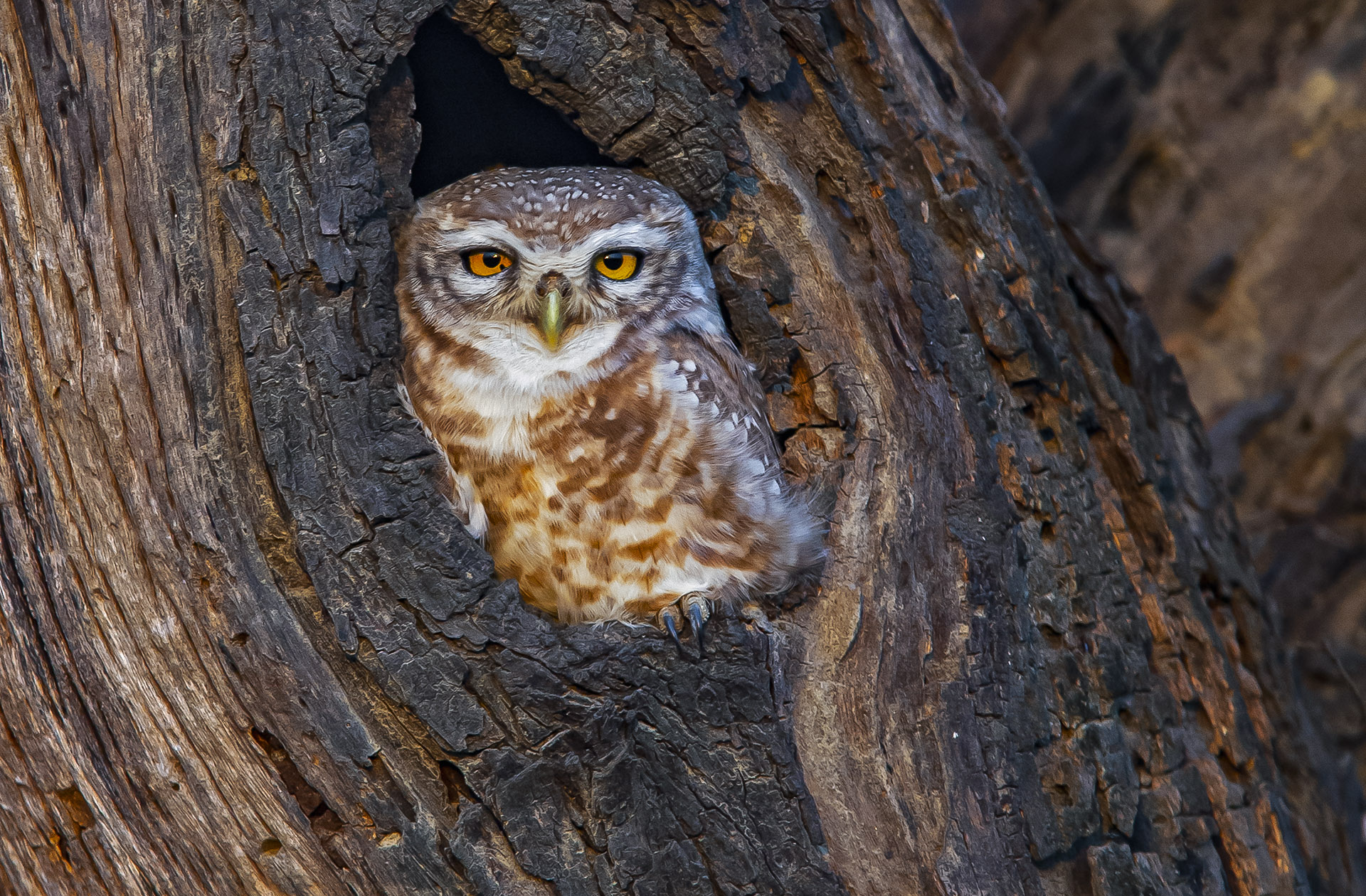 Winter is a wonderful time at Keoladeo National Park, the forest buzzes with the calls of hundreds of resident and migratory avian species. There’s a nip in the air, a hint of a fog, and a delicious chill that makes it easy to spend hours birdwatching.

Like many forests of India, Keoladeo National Park, more popularly known by its earlier name Bharatpur Bird Sanctuary, was once the hunting ground of the local king, Maharaja Suraj Mal, who established the fortified city of Bharatpur, Rajasthan, in 1773. The sanctuary was originally located in a natural depression that flooded annually, until 1760 when an earthen dam, the Ajan dam, was constructed. The bunds (dykes) provided a ready perch for the Maharaja to practice his duck shooting skills, a sport the British continued well into the 1900s. But hunting was eventually prohibited by the Indian government, and in 1982, this forest was declared a national park. It attained UNESCO World Heritage status in 1985. The freshwater marshes and manmade wetlands inside the protected sanctuary attract a variety of species of migratory birds from faraway lands: Australia, China, Mongolia, Afghanistan, Siberia, and Russia.

There are many street legends about the park’s name — some believe that Bharatpur gets its name from the Hindu deity Rama’s brother Bharat. The current official name, Keoladeo National Park, comes from the temple to deity Shiva or Keoladeo that sits inside the park. The park is locally also known as “Ghana” referring to its dense canopy.

The best way to get around the park’s swampy lakes and through its wooded areas is on a bicycle or a three-wheeler cycle rickshaw. Photo: Charukesi Ramadurai Spotted owlets roost in small groups in tree trunks, crevices, or holes in Keoladeo National Park. Cover photo: Dhritiman Mukherjee

Keoladeo National Park is one of the most significant wetlands in the country. This is not surprising, given its origin as a natural depression and later, a water management area. To this day, much of the park is covered by dykes, swamps, marshes, and small lakes, which have been lauded by the Ramsar Convention, an international treaty for the conservation of wetlands, for its conscious effort to conserve and optimise the way water is used in this desert ecology. However, apart from the swampy lakes and wetlands, the park is also one of India’s most diverse birding landscapes, with dry grasslands, scrublands, and thick woodlands in the interiors. Given its proximity to the evergreen tourist destination of Agra (60 km/90 minutes away), Bharatpur sees plenty of both avid birdwatchers and tourists seeking some fun.

The forest sprawls over 29 square kilometres, with over 11 km of paved roads inside the park. To my absolute delight, no motor vehicles are allowed beyond the initial 1-2 km. The roads are lined with tall, dry deciduous trees such as jamun (Syzygium cumini, also jambul), babool (Vachellia nilotica or gum Arabic tree), ber (Ziziphus mauritiana, called the Indian jujube) and pilu (Salvadora persica, used as a natural toothbrush) trees, and various shrubs. The best way to experience the forest is on cycle-rickshaws, whose hardy drivers double up as reliable guides. Most hotels around the park also offer bicycles on rent. Only the most tenacious birders wander around on foot, lugging their heavy cameras and tripods. There is also the occasional boating on Bharatpur Lake just after the monsoons, offering up-close and personal sightings of waterfowl.

Qualified birding guides can be hired from outside the park gates, or arranged through local hotels and guesthouses. Most of the guides have their finger on their customers’ pulse, and help them explore the park accordingly. There are numerous birding hotspots: the famous sunrise spot close to the main gate where peacocks perch on barren trees; the painted stork colony; the rock python point near the temple; and the pond where the spectacle of the mating dance of the sarus cranes has been seen. Bharatpur comes through for every kind of visitor. In two days at the park, I alternated between rickshaw rides and exploratory walks along with my driver-guide Raghubir Singh who has both razor-sharp eyesight and extensive knowledge of the park and its residents.

A nilgai, the largest Asian antelope, inspects the photographer as a cattle egret hitches a ride on its back in Bharatpur (top). Rhesus macaques (above) are known to adapt to a wide variety of habitats; they are abundant in Keoladeo. Photo: Dhritiman Mukherjee (top), Photo: Charukesi Ramadurai (above)

According to UNESCO’s citation, Keoladeo National Park is home to over 375 bird species, including five critically endangered, two endangered, and six vulnerable species. There are plenty of other life forms too, given that there is plenty of water, particularly in the years with good rainfall. The park has 50 species of fish, 13 species of snakes, 7 species of turtles, and nearly 400 species of flora. The further you venture into the park, the greater your chances of spotting animals such as sambar, nilgai, chital, blackbuck, golden jackal, rhesus macaque, and Indian porcupine.

However, the real stars of Bharatpur are the winter migratory birds (particularly waterbirds) that fly in from as far as Afghanistan, China, and Siberia. In fact, Bharatpur used to be famous for being the wintering ground of endangered Siberian cranes, but they have not been sighted here since the winter of 2002. But sarus cranes, the tallest birds in flight, with beautiful red bands around the neck and head, are just as enchanting to watch. In winter, other threatened species, such as the greater eagle and the imperial eagle, take up residence here. Other popular winter arrivals are a variety of geese: bar-headed geese fly over the Himalayas to reach the park, grey-lag geese come from Siberia, the others are pintail geese, Asian pygmy geese, greater white-fronted geese, and lesser white-fronted geese. Red-crested pochard, common pochard and Baer’s pochard, several kinds of ducks, pintails, both the greater and lesser flamingos, and the elusive Siberian rubythroat are other prominent visitors.

The sarus crane (left) is one of the tallest flying birds in the world and one of the star early-morning attractions. The flameback woodpecker (right) is a busy bird that may be seen pecking away on tree trunks looking for insects and worms. Photo: Sourabh Bharti/Shutterstock (left), Photo: Dhritiman Mukherjee (right)

And then there are secret spots that each guide keeps close to his heart, where rarer species like the sociable lapwing, Marshall’s iora, and black bittern are likely to be spotted.

The oriental darter has a long, slender snake-like neck that often sticks out of the water while it’s swimming, making it look like a snake is riding on calm waters (left). The purple heron is a winter visitor to India, and feeds on fish, rodents, reptiles, and insects (right). Photo: Dhritiman Mukherjee (left), Photo: Kandukuru Nagarjun (right)

In the scorching summer months between April and September, the forest becomes dry and inhospitable. The birding season starts just after the rains in September, when the land turns green and the lakes and swamps fill up, inviting birdlife. Earl-December to end-February is the best time to see migratory birds. Boat trips are dependent on the water levels in the lakes and wetlands.

The park is open from 6 am – 6 pm through the year, with entry fees set at Rs75 for Indians and Rs200 for foreigners (Rs200 extra for video cameras). Guiding fees start at Rs200 per hour.

By train: There are several trains connecting Delhi (most of them from Nizamuddin) with Bharatpur; the railway station is just 6 km from the park.

By air: Agra is the nearest airport, with connections to a few Indian cities including Jaipur, Varanasi, and Bengaluru.

Keoladeo National Park is a mosaic of wetlands, woodlands, and grasslands. It is most popularly known for its marshes, swamps, and lakes because they attract a wide variety of waterbirds. Photo: Charukesi Ramadurai

Iora Guesthouse: Set off the main road, and popular among bird photographers, this is a good budget option in Bharatpur. It serves simple food and has an adjacent travel café where birders meet and exchange notes. Doubles from Rs1400, including breakfast.

Hotel Sunbird: Situated close to the park entrance, this place has comfortable rooms and friendly staff who can arrange guides and transport into the park. Doubles from Rs2260 including breakfast.

Bharatpur Forest Lodge: With the best location, 1.5 km inside the park, this lodge has 17 air-conditioned rooms with private balconies. Doubles from Rs4000 including breakfast. 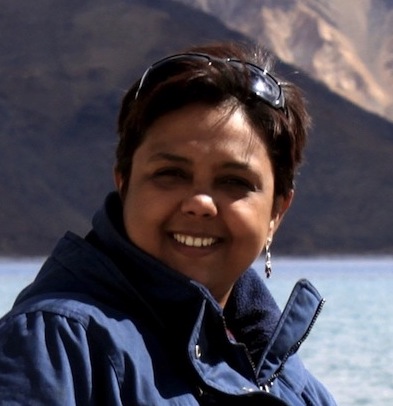 is a freelance journalist writing on travel, food, art and culture, wildlife and environmental issues. More at charukesi.com