On a crisp winter morning, Anil Kapoor, a 73-year old Delhi-resident, and I walk towards a tiny garden at the far end of his residential colony in Alaknanda, Delhi. From a distance, it looks like an ordinary park — it’s gated, green, and paved, perfect for morning walks. But as we get closer, I realise that it has a certain wild, untamed quality that aggressively disciplined city gardens lack — no plant is trimmed for consistency, manicured lawns are missing, and some leaves are eaten to their spine. Yet this haphazard-looking garden seems lovingly tended, and carefully planned. A few shrubs have hand-painted signs peeping out of the dense foliage — ‘Verbena herb: Nectar Plant’ says one, surrounded by a wild bush with tiny purple-white flowers, ‘Barleria prionitis: Host Plant’ says another. But most importantly, butterflies flutter everywhere in numbers that I have never seen before in the city. Several pairs of grass-yellows, delicate sprightly butterflies with powdery yellow wings, dance over fresh, new grass. A couple of common castors, orange with a cryptic wing pattern, casually fly by. “This is no ordinary park, it is a butterfly park,” says Kapoor, beaming. “Every plant here is to attract caterpillars and butterflies.”

Until June 2019, the area was a garbage dump. “I wanted to introduce a few plants that can attract caterpillars and butterflies,” says Kapoor, a retired businessman, and amateur wildlife photographer. “Our locality has 30 parks, but when I came up with the idea I was directed towards this decrepit corner.” Kapoor took up the challenge. After months of meticulous work, and a little help from Sohail Madan and his team at Conservation Education Centre (CEC), a Delhi-based faction of the Bombay Natural History Society, he turned it into a garden. Today, at least 17 different species of butterflies are regular visitors.

The butterfly garden is not the only one in the city. Thanks to CEC, Delhi has 31 butterfly parks — a few in residential neighbourhoods, one at a hospital, another at a school in Dwarka, a five-star hotel, and a government school in Mangar Bani. If everything goes according to plan, there may soon be a hundred. The gardens are a part of a larger scheme to build a loosely connected butterfly corridor to link two forests ranges on either ends of the capital city, so these plant pollinators, threatened by growing urbanisation and pollution, can journey safely.

The striking common castor gets its name from the castor oil plant that its larvae feed on almost exclusively. Photo: Sohail Madan Cover Photo: Butterflies and moths, such as these grass-yellows, often congregate around moist, damp spot on the ground for “mud-puddling”, a process through which they absorb salts and minerals from the soil. Cover Photo: Sohail Madan

Insect populations have been plummeting across the globe. In India, conservationists have been raising an alarm, but in the absence of concrete research, what we mostly have are frightening anecdotes. “I grew up seeing plenty in my backyard — butterflies fluttered in my garden, every monsoon moths crowded around a single light bulb,” says Madan, who has grown up in Delhi. “Now I have to travel to forests to see them.” One of the many reasons is that continuous green patches in the city have been destroyed, and butterfly populations are now locked in fragmented, isolated pockets. The inability to travel from one geographical area to another restricts their range and food resources. “Butterflies also need to breed across locations. Exchange of genes or genetic diversity among populations is extremely important. It builds a stronger species with better ability to withstand infections,” argues Madan.

So when the Delhi government asked CEC to build a butterfly park on a barren plot at the abandoned Bhatti mines, they jumped at the opportunity. In 2017, on World Environment Day, Madan and his team opened Delhi’s first butterfly park to the public, and part of the Asola-Bhatti Wildlife Sanctuary. To encourage visitors, the team started celebrating every September as “Butterfly month” — organising events, butterfly walks, and photography contests. Many who dropped by asked if they could carry a few host plants back to entice butterflies into their homes and balconies. Kapoor was one of their most eager participants, and soon the butterfly park in Alaknanda became one of the first butterfly parks they helped set up. Then, another South Delhi school enquired about building a similar park in their premises. An idea took root, and the team started dreaming of an ambitious plan for Delhi. 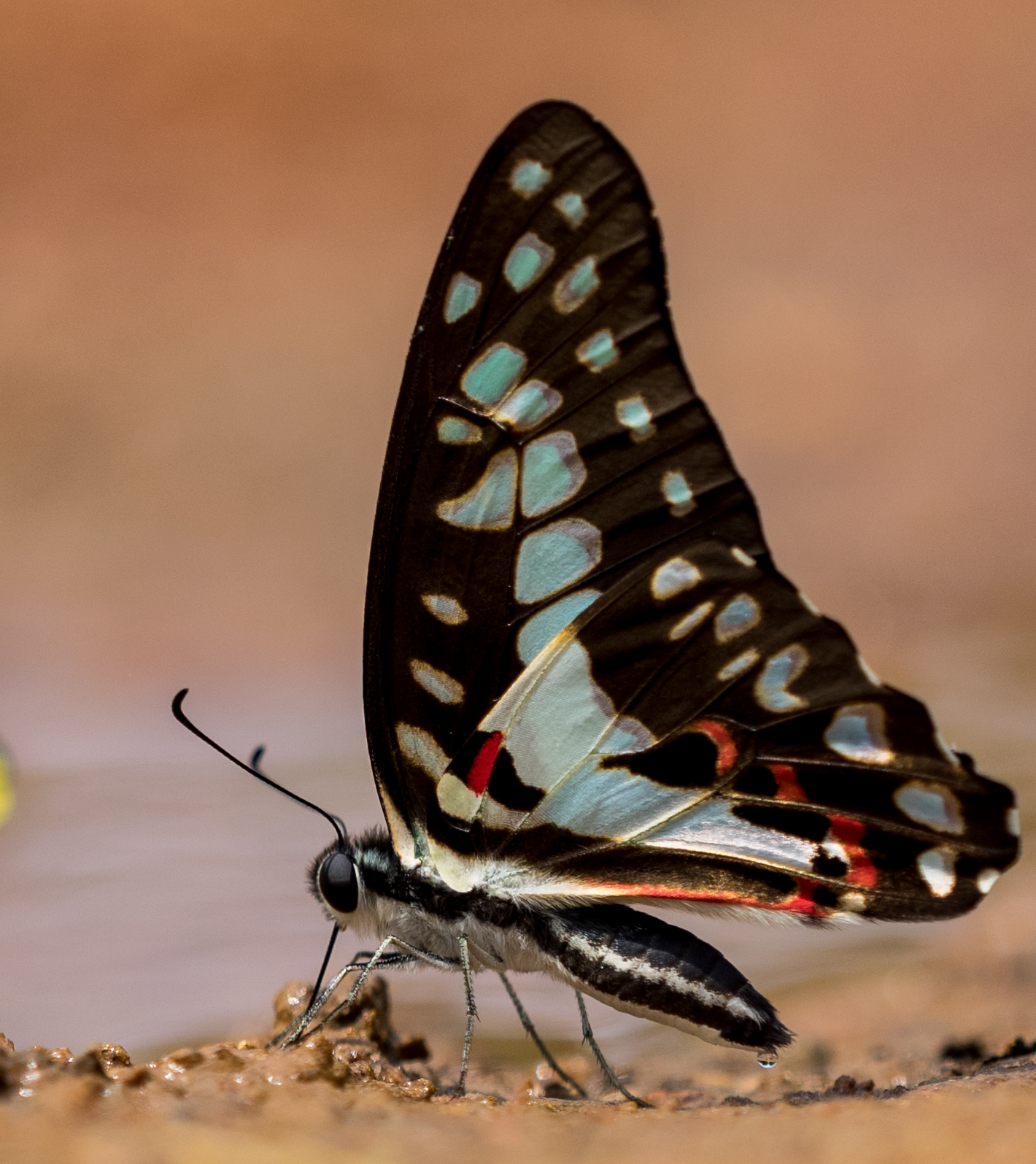 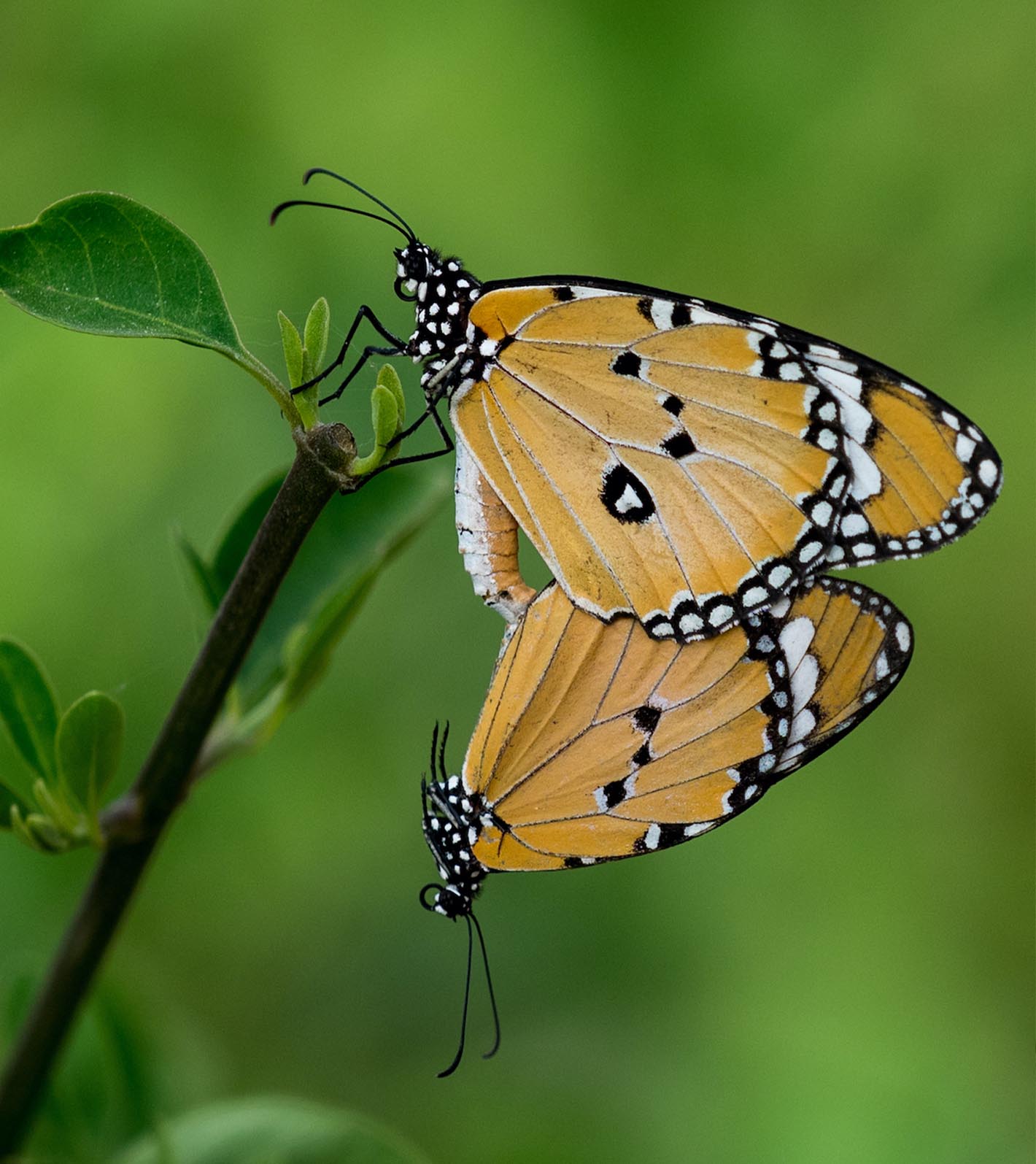 While travelling through the crowded city, it is easy to forget that a forest sneaks like a serpent through the capital, circling educational institutions, quietly going past glitzy malls, and running along the capital’s cursed river, the Yamuna. The Delhi ridge, an extension of the Aravalli Range, stretches for 35 km from Tughlaqabad to Wazirabad on the west bank of the Yamuna. The Asola-Bhatti Wildlife Sanctuary falls on the southern end of the ridge. The northern ridge is a reserve forest around Delhi University. Both patches — green, lush, and teeming with biodiversity (read nilgais, leopards, jackals, bees, butterflies) — are separated by a city choked by dust, concrete and pollution. “What if we could build a corridor for butterflies that connected the two ridges?” asks Madan. These connections must have existed until we hacked the trees and replaced them with manicured gardens loaded with pesticides that kill caterpillars at early stages.

This bright, green caterpillar will grow into an evening brown butterfly, a pale, ochre-coloured butterfly with cryptic patterns on its wings. Photo: Sohail Madan

A map was drawn out. The team marked out areas that connected the two ends, where they could create small butterfly gardens that would act like distributive habitats. A butterfly is a charming thing, why would anyone resist a garden that invites them? The initial enthusiasm from citizens that the team contacted was overwhelming, but they quickly realised that they were dealing with a far deeper malaise. The public idea of what is “green” was remarkably different from Madan and his team’s concept. “People would invite us to build these gardens, but the moment they saw that butterfly gardens looked nothing like the pretty parks they were used to, they sent us back,” says Madan. “People didn’t want plants with eaten leaves in their gardens, and most gardeners, used to building perfectly ordered gardens, were reluctant to do away with pesticides that keep away bugs and bees,” he says. The first myth that Madan had to bust was that a plant with eaten leaves is dying or diseased. The second myth, was that a caterpillar is a pest. The plant and the caterpillar share a symbiotic relationship that is important to the ecosystem. Caterpillars bloom into butterflies who pollinate plants. They are also a food source for birds, bats, and other creatures. Entire ecosystems can stumble without butterflies. “The way our public gardens are tended is actually detrimental for the city’s biodiversity. Public gardens are not extensions of our homes and there is no need to manicure them the way we do,” says Madan. “But there is definitely need to keep some of these patches wild so nature can take its course.”

As Madan and his team persisted, they found citizens, teachers, and students who were willing to give the team a free reign to plant more native plants, and agreed to let go of pesticides. “We need to rewire how people think of ‘Green Delhi, Clean Delhi’ A regular park might look green to you, but what is the point if it doesn’t nurture an ecosystem?” says Madan.

As I walk around the park with a visibly excited Kapoor, I realise that Madan and his team are steadily shifting the way people think about gardens. One minute Kapoor is talking to me, another he is on his knees photographing a butterfly that has just settled on a bush. “This is a small cupid,” he says, pointing at a pale brown butterfly with intricate spots on its wings. In January, 2020, he threw a park party inviting 150 people from his neighbourhood and the local MLA in an effort to raise awareness about butterflies and how they nurture our ecosystem. Children now turn up on weekends for “Breakfast with butterflies” where Kapoor talks to them about a caterpillar’s lifecycle. But wait! An orange tip butterfly has just fluttered by, and Kapoor is tracking it with his lens. The park’s security guard has joined us now, and has his phone pointed at the butterfly too. This time, I pull out my camera and join the party. “Once you fall in love with butterflies, there is no going back,” laughs Kapoor.