As Kolkata loses some of its heritage buildings to new development, the shifting landscape claims an unlikely victim — the nocturnal, shy palm civet 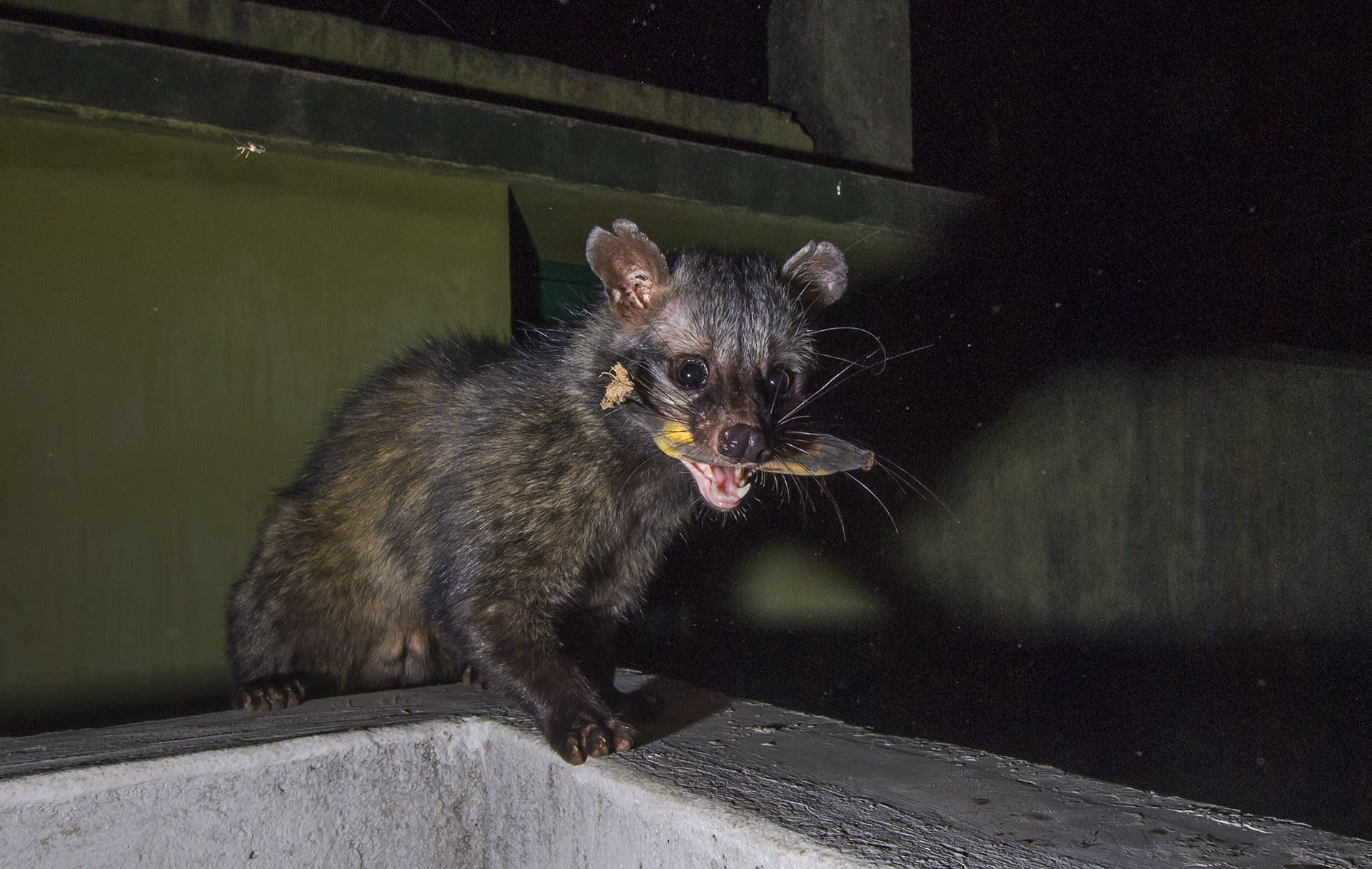 On 25 March 2013, when court officials entered room number 14 of the Calcutta High Court, they heard loud thud-thud noises from the wooden ceiling. When they prodded the source with a stick, a palm civet broke through the roof and landed on the visitors’ bench. An alarmed judge contacted the Forest Department that arrived in style with flashlights, nets, cages, and other apparatus. The “intruder” was briskly caught, caged, and released in the wild.

Few know that this “intruder” is one of the earliest residents of the century-old gothic court building, living in its dark attics, lofts, and ceilings. Occasionally, a pungent faecal odour wafts out of closed courtrooms. On some days, cleaners find brown, lumps of poop on its teak wooden benches. But apart from these rare clues, one can work here for a lifetime and never hear of its secret tenant.

The old buildings of Esplanade, a neighbourhood in Central Kolkata constructed during British rule, are a popular civet haunt. Photo: Zvonimir Atletic/Shutterstock
Cover photo: Asian palm civets are found in a variety of habitats from forests to suburban gardens and densely populated areas. This civet was spotted by the photographer on his terrace in Kolkata. Cover photo: Dhritiman Mukherjee

The Asian palm civet (Paradoxurus hermaphroditus) is found across South Asia. Though it is commonly called a civet “cat” because of its size, it belongs to a family of Viverrids that include other long-bodied, short-legged, equally lesser-known mammals such as linsangs and binturongs. The palm civet has dark eyes, pointed ears, and a fox-like snout but none of its grace. Its body is covered with coarse, blackish hair, while a bushy tail hides glands that release a nauseating smell when threatened. It also uses the scent to communicate and mark territory.

Though it is an omnivore and occasionally hunts, its main diet is fruits, especially figs and guavas. But the reason it is mostly unseen, is its shy, nocturnal, and arboreal (tree-dwelling) lifestyle. In forests, it picks the tallest trees with the densest canopies to hide. In urban neighbourhoods, lofts, attics and roofs of old houses surrounded by fruit trees form a seamless environment — perfect with dark corners to curl up in all day, and an interconnected tree cover for ample movement at night.

Unfortunately, its nocturnal character has led to much mythmaking. In Kolkata it is known as bham bhiral and accused of stealing human babies. In Maharashtra it is known as kandechor or onion thief. In Delhi, it is called the kabr bijju or grave digger. Reality is far from this.

“Palm civets are absolutely harmless,” says conservation ecologist Soumya Prasad who has been studying them in Dehradun. In cities, they are the largest seed-dispersing mammals. Unlike other seed dispersers such as bats and hornbills, they are fiercely territorial. “As long as you have civets in your backyard you can be rest assured that you are living in a healthier, greener part of the city,” she says. Despite their services, civets are not a conservation priority.

The Asian palm civet is a creature of the night, foraging from dusk to the crack of dawn. During the day, it curls up and hides in tree crevices or holes. In urban neighbourhoods, it occupies dark lofts and attics. Photo: Anirban Chaudhuri

About a decade ago, their fate made a turn for the worse in Indonesia, when coffee beans digested and pooped by palm civets were believed to produce a superior coffee. Apart from making headlines for being caged and traded for the production of the most expensive (and cruel) cup of coffee in the world (kopi luwak coffee can cost up to $100 per serving), the civet has largely lived a secretive life. Until now.

Arjan Basu Roy, engineer, publisher, and secretary of Kolkata-based non-profit organisation, Nature Mates, first got a rescue call for palm civets in 2009. Three newborns were found abandoned on the road — with eyes still sealed and moist red noses, they looked like rat babies. “It was love at first sight,” says Roy. He took them in, and with guidance from the forest department, raised them until they were ready to return to the wild. Since then, the frequency of calls has gone from one in three months to about 2-3 each month. As of the end of 2020, Nature Mates had rescued and rehabilitated over 80 palm civets. “The rise in calls is a sign that Kolkata is changing,” he says.

Kolkata is a city with a rich architectural heritage. The North is known for grand old palaces built by the erstwhile Bengali aristocracy, and is mostly protected under the Kolkata Municipal Corporations Heritage List. Central Kolkata’s business district with old colonial buildings, including the Calcutta High Court, the iconic structures of Esplanade Row, and age-old pubs and eateries of Park Street are all popular civet haunts. In South Calcutta on the other hand, there are charming single and double-storey buildings constructed by the Bengali middle class and refugees from Bangladesh in the early 20th century. Characterised by open porches, red stone floors, balconies, rooftop terraces, attics, deep lofts, palm-sized windows for ventilation, these homes gave Kolkata its character. Most were also surrounded by generous guava and fig trees. These neighbourhoods are not protected under any heritage list and are being replaced by plush apartment complexes. The civet is the unlikely victim of this development. 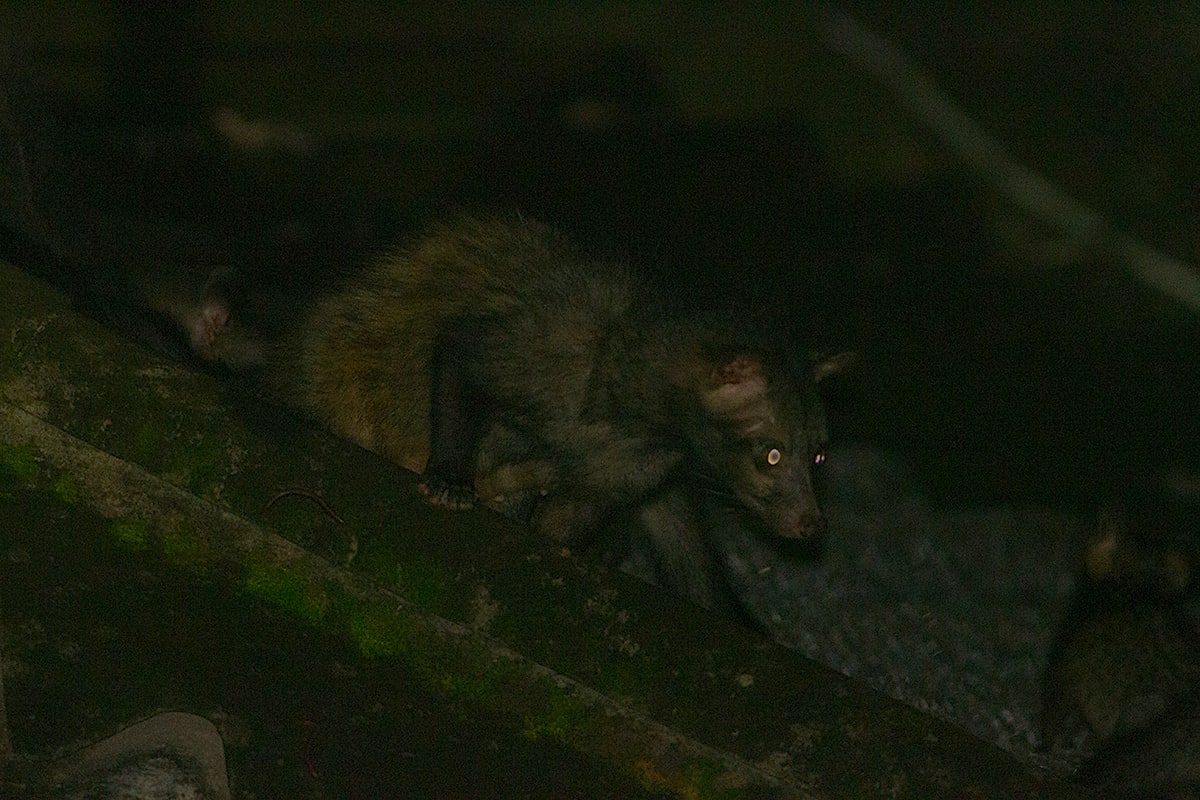 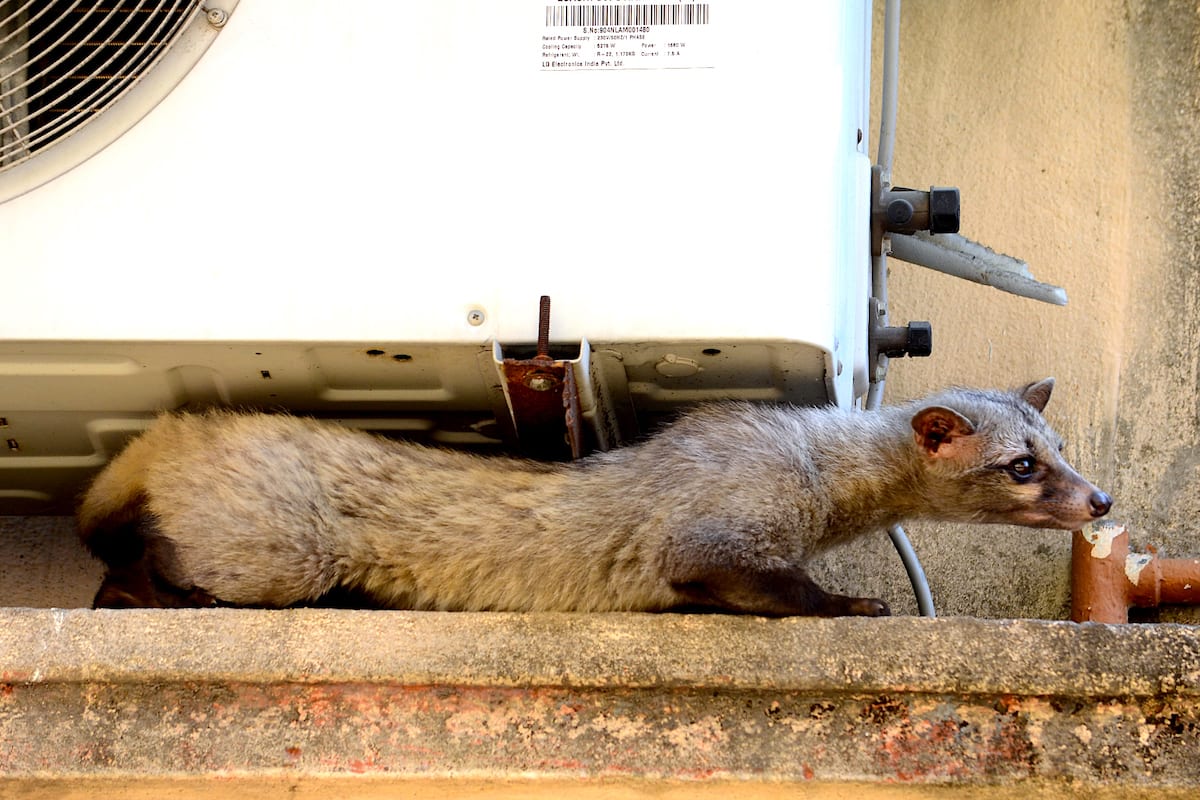 “We have moved far away from that old-world aesthetic,” says Peeyush Sekhsaria, Pune-based architect and naturalist. “New constructions are meant for air-conditioned living, deliberately insulated from all outside entry.” Windows are now bolted shut, porches are a thing of the past.

In the past and in rural areas today, thatched roofs, with overhangs and eaves, harboured birds, squirrels, rodents, and civets, but once replaced with iron and asbestos sheets and flat RCC roofs, an entire ecosystem disappears. Sekhsaria reckons it is how we also drove away the house sparrows. The civets are, however, not giving up without a fight. With semi-retractable claws and strong hind legs, they are excellent climbers. “When tree cover in Kolkata started thinning, they used electric wires to cross crowded streets. When old homes were replaced by posh flats, they used false ceilings and AC ducts to make homes,” says Anirban Chaudhuri, who also works with a conservation organisation on countering wildlife-trafficking.

In February 2020, Roy got rescue call from an old abandoned house in Bhawanipore, a historic neighbourhood in South Kolkata. The luxurious but crumbling single-storey heritage property was hidden behind large banyan and fruit trees. The owners had moved abroad, and it remained unoccupied for years. Two families of palm civets had moved in. The day it was to be torn down the contractors scared the mother away, leaving behind a barely conscious litter of four.

A couple of days later Roy got a call from Bandsroni, also in South Kolkata. In an opulently decorated, cluttered room and attached terrace of a four-storey building, a family of four civets had moved into the false ceiling. “As the children grow, they run about and create quite the racket. Now imagine the sounds coming from your ceiling in the middle of the night,” says Roy. “We had to convince the family that the civets mean no harm and all they had to do is clear the clutter. Civets don’t like open spaces where they cannot hide.” The idea, says Roy, is to gently drive the civets to move elsewhere in the neighbourhood, instead of trapping, and releasing them in a faraway forest. 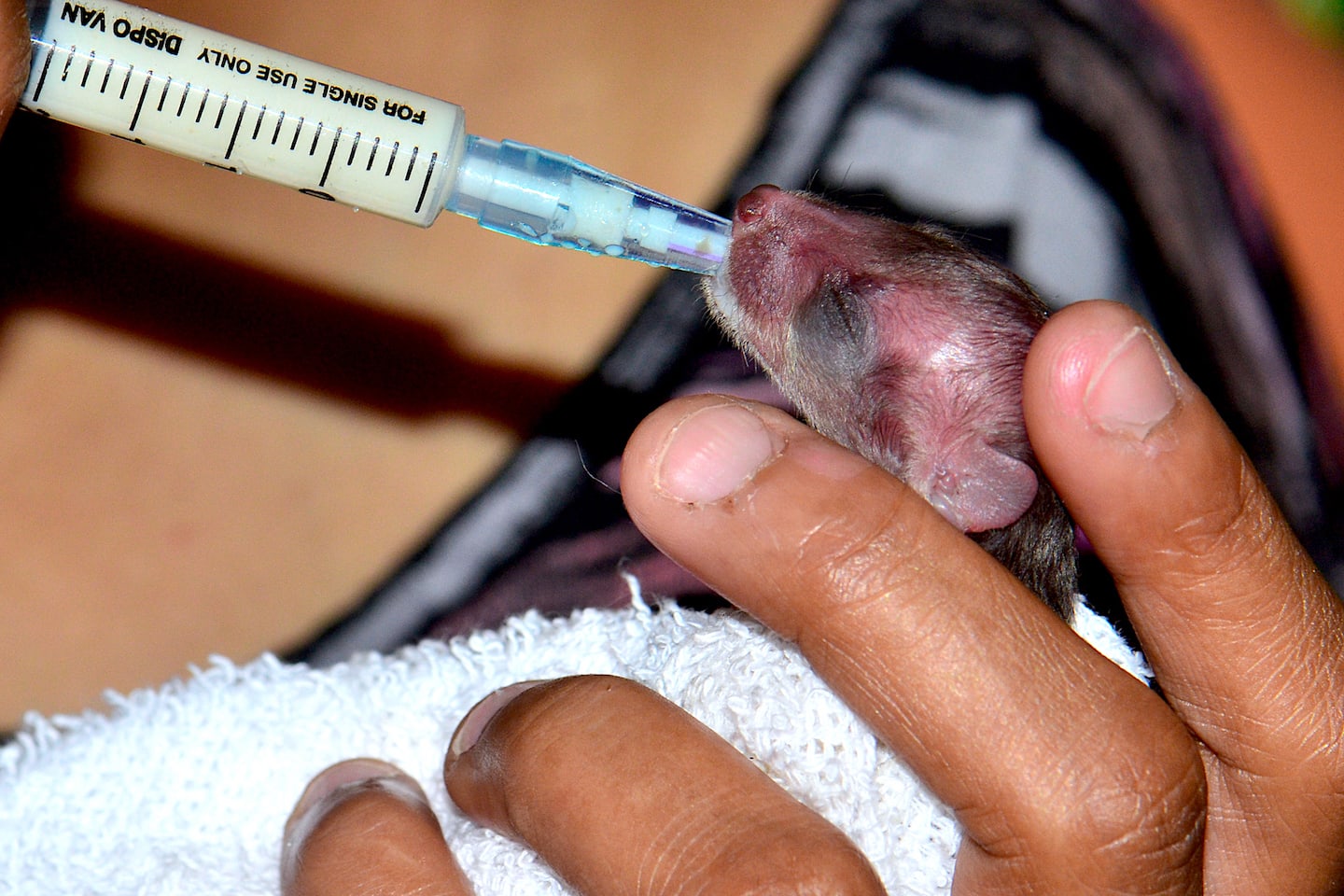 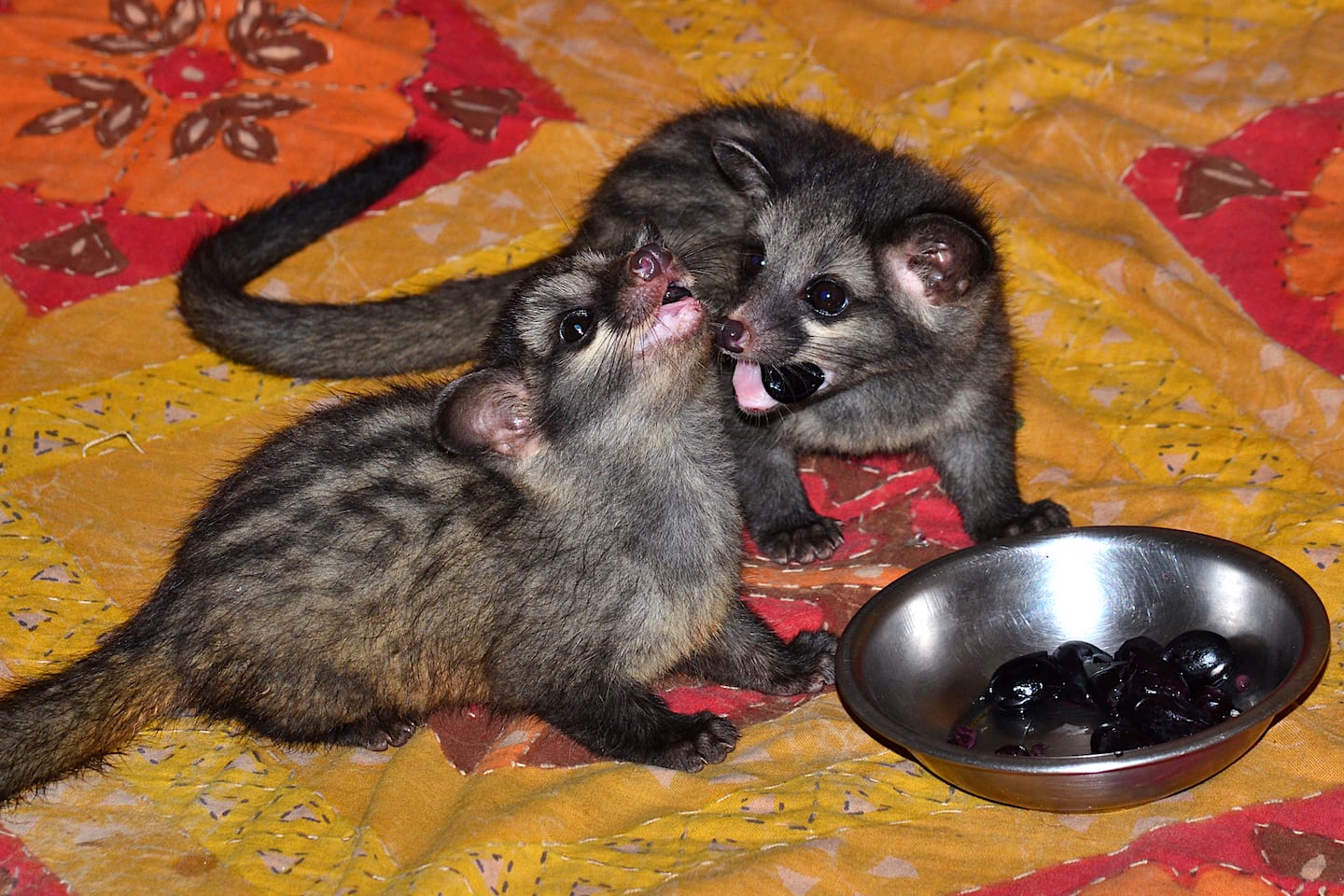 (Left) Newborn civet babies need constant care. A rescuer feeds a neonate that is less than 10 days old. (Right) Within a few weeks they can eat by themselves. Photos: Anirban Chaudhuri

Most animal rescues in cities involve catching a creature, treating injuries, and releasing it in Kolkata’s greener periphery. With civets, when a building is torn down, cases of a mother fleeing in panic and leaving behind a litter are rising. Newborns are vulnerable — they open their eyes after 11 days and are weaned only after two months. The mother then teaches them to climb, forage, and hunt. Without a mother, raising a civet is no less than raising a child. Since the first rescue in 2012, Roy, Chaudhuri and his wife Arpita Dutta have assisted the forest department in rescuing 33 palm civet neonates. “You have to make sure they urinate and poop so they are not constipated. You need to pat them after a meal and wait for them to burp,” says Chaudhuri. Arpita is a programme officer at a turtle conservation organisation where she watches the “sixth mass extinction” become a reality every day. Helping a misunderstood creature return to the wild is a ray of hope she holds on to. “The civets don’t need us, we need them. I cry every time I say goodbye to a juvenile civet I helped raise,” she says. “But it’s the best feeling in the world.”