When a few potted plants were left to grow wild on a Delhi terrace, they attracted an entire ecosystem — from delicate butterflies to foot-long colour-changing lizards 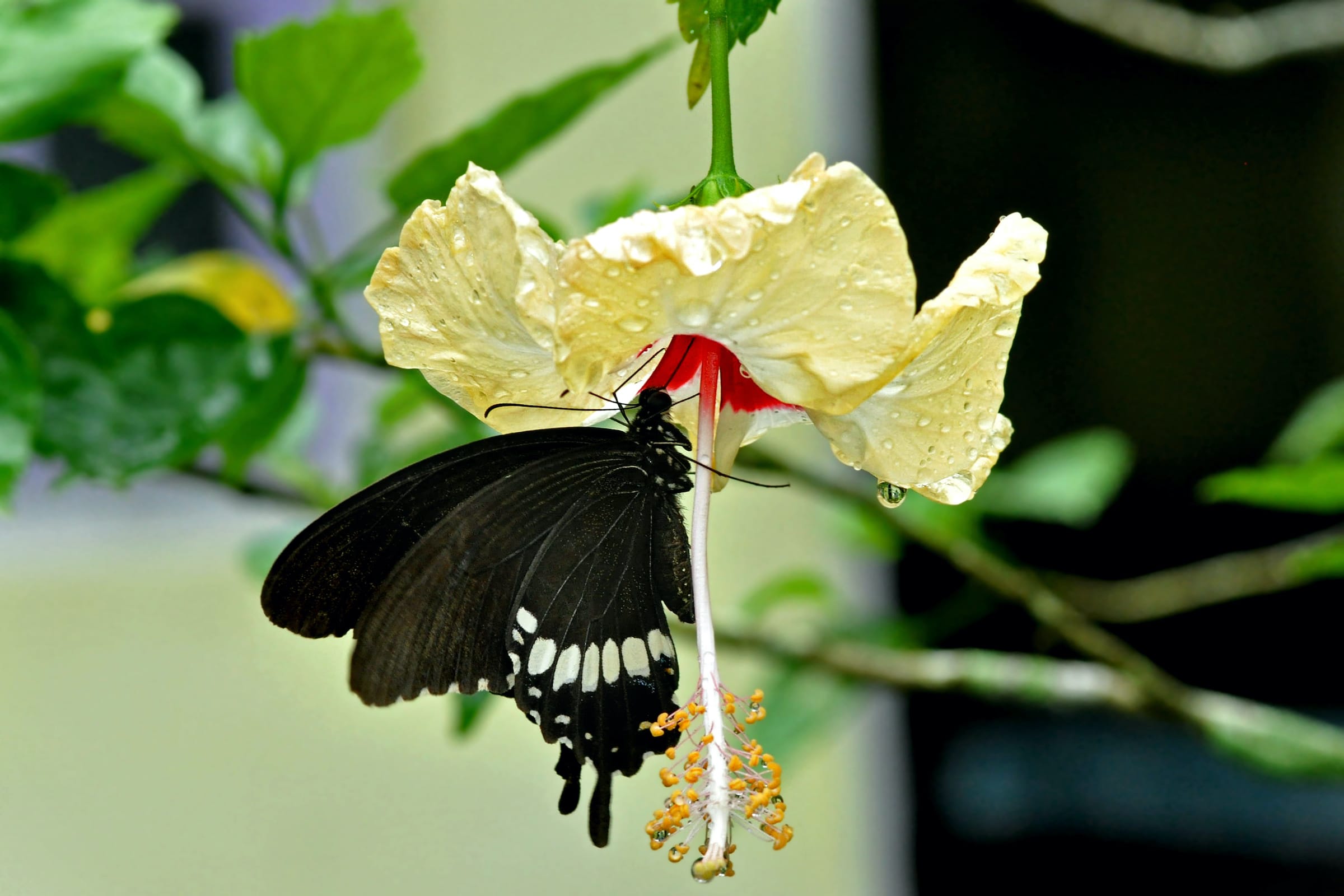 I had always thought of home gardens as merely ornamental. They were good to spruce up a space, but seemingly did not contribute to fostering biodiversity. So when I brought potted plants to green my bare terrace, little did I expect a thriving ecosystem would take root in a few square feet atop a crowded, polluted Delhi neighbourhood.

At first, I got common household plants — tulsi, hibiscus, areca palm and different varieties of ficus — all manicured, fresh from the nursery. Partly out of laziness and partly hoping to diversify the flora, I let the garden grow unsheared. Soon enough, weeds, wild plants and even trees started taking root — a subabul sprouted on its own and shot up eight feet in a month! It would have probably surged further if I had not chopped off its crown.

Urban gardens can host a tangle of plants ranging from climbers and creepers to flowering plants like the hibiscus and small trees. Photo: Sanjay Basak
Cover photo: The common mormon (male) is a regular visitor in urban gardens. Here it is sucking on the nectar of a hibiscus flower. Cover photo: Sandipoutsider / CC BY-SA 4.0

Within a few days, there was a glimmer of arthropod life in the hibiscus shrub. Every time I would water it, a white spider would leap to the neighbouring plant, swinging like a crazed pendulum on its silk shoots. After scrolling through entomology forums, I narrowed it down to a white crab spider.

Soon enough, more creatures began visiting my former wasteland of soot and dust. The flowers brought in bees. A bout of rain welcomed crane flies and dragonflies, often resting under leaves at night. But none were as unexpected as the reptile that arrived. There is no tree adjacent to my house, nor tall buildings, so imagine my surprise on spotting a foot-long oriental garden lizard. Unlike others of its ilk, however, it did not camouflage very well, choosing to remain on the upper branches. It would soon be easy prey, I thought. By the third day, it had disappeared, presumably into the gizzard of a black kite.

(Top) A laughing dove is a common urban bird. Its bubbly, musical laugh-like call is often heard around cities. (Above) Oriental garden lizards (Calotes versicolor ) are seen basking in the sun or scurrying up trees in city gardens. Photos: Sanjay Basak

As surprising were the butterflies. First, there was the common grass yellow, which had a fondness for the abundant periwinkle flowers. I had often seen them huddled around puddles (to feed on minerals from the soil), so could easily identify them. Then came the tiny grass blue, which I saw perched on branches. I even spotted a common gull on the crimson flowers of a jatropha plant.

Pretty as these were, I could not track any of them for as long as I did the common mormon butterfly. I had never sighted it in my garden until last month but surmised its presence years ago from fascinating clues — bird droppings-like blotches on leaves. I realised these were not avian excretions when the ‘droppings’ began to grow. Eventually they transformed into segmented green blobs with two eye spots — eye-like marks that deter predators. This, I found out, was a caterpillar in its fifth and final instar (a developmental stage of an arthropod). While butterflies generally drink nectar from a variety of flowers, they lay their eggs on specific plants that their caterpillars feed on. The common mormon had deposited its brood on a curry leaf plant. I never spotted the pupae — perhaps a predator had gotten to them or perhaps they were brilliant at camouflage — but the recent visit of the butterfly and the half-munched curry leaves reassure me that they are around even though I rarely see them. 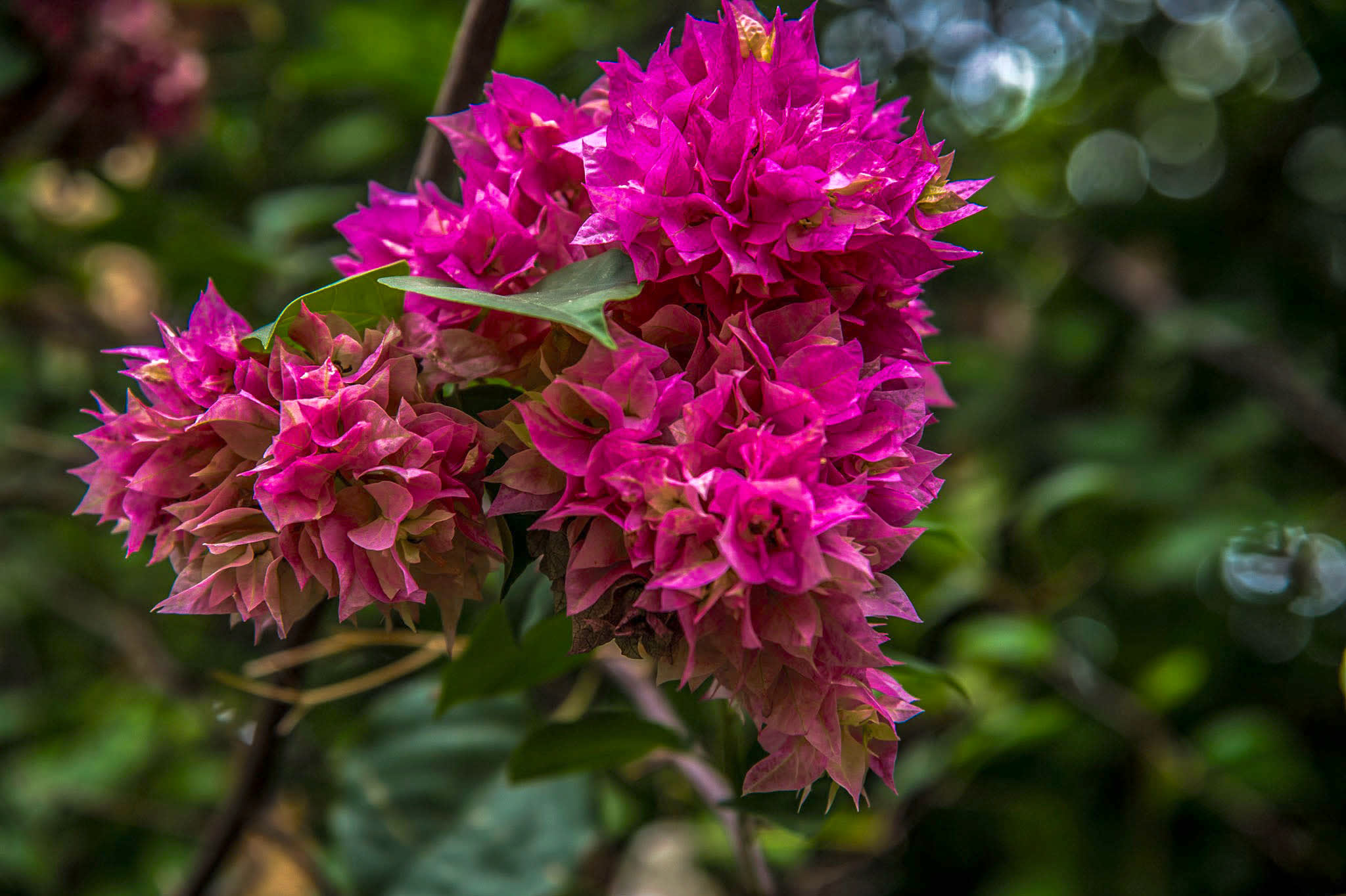 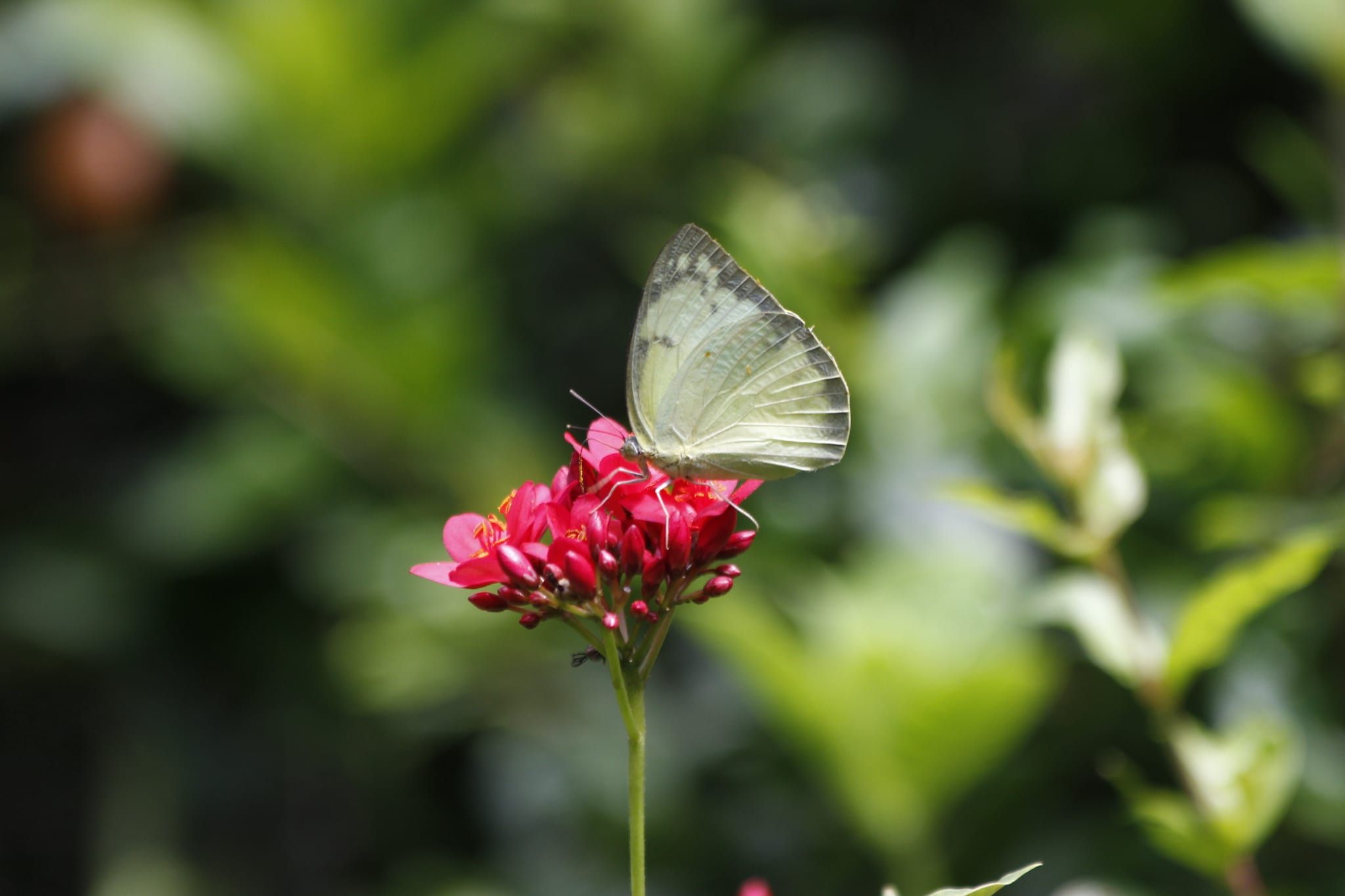 (Left) Bougainvillea plants add colour to the garden and are excellent climbers that can grow over walls and other trees. (Right) The jatropha is a popular ornamental flowering plant but few know that oils extracted from the plant are used to varnish furniture. Photos: Sanjay Basak

The curry plant manages to survive the depredations of the caterpillar, but others are not as resilient. Every summer, a ghostly white casing encrusts the hibiscus and mallow plants. These are aphids, the vampires of the insect world—they suck the plant’s sap, often until it dies. Despite this, they fascinated me once I noticed ants milling around them. Aphids excrete the sugar-rich sap of the plant after absorbing nutrients. This is known as ‘honeydew’, which ants feed on. The ants even ‘milk’ the aphids (stroke them with their antennae to stimulate the excretion), ‘farm’ them (carry them to other plants for more sap) and protect them from predators.

Although I often lose plants to pests, I do not use pesticides — for as pleasing as the foliage and flowers is a patch buzzing with life. Even after years of tending the garden I still find creatures I’ve never seen before. That’s how I expanded my vocabulary from ‘insect’ to horned treehopper (which also secretes honeydew that attracts ants), spider mites (which spin silk webs under leaves), leaf miners (which leave behind telltale trails in leaves), and black soldier fly larvae (far more adept at waste disposal than Indian municipalities). Although not a teeming forest floor, I had inadvertently created a habitat of sorts. 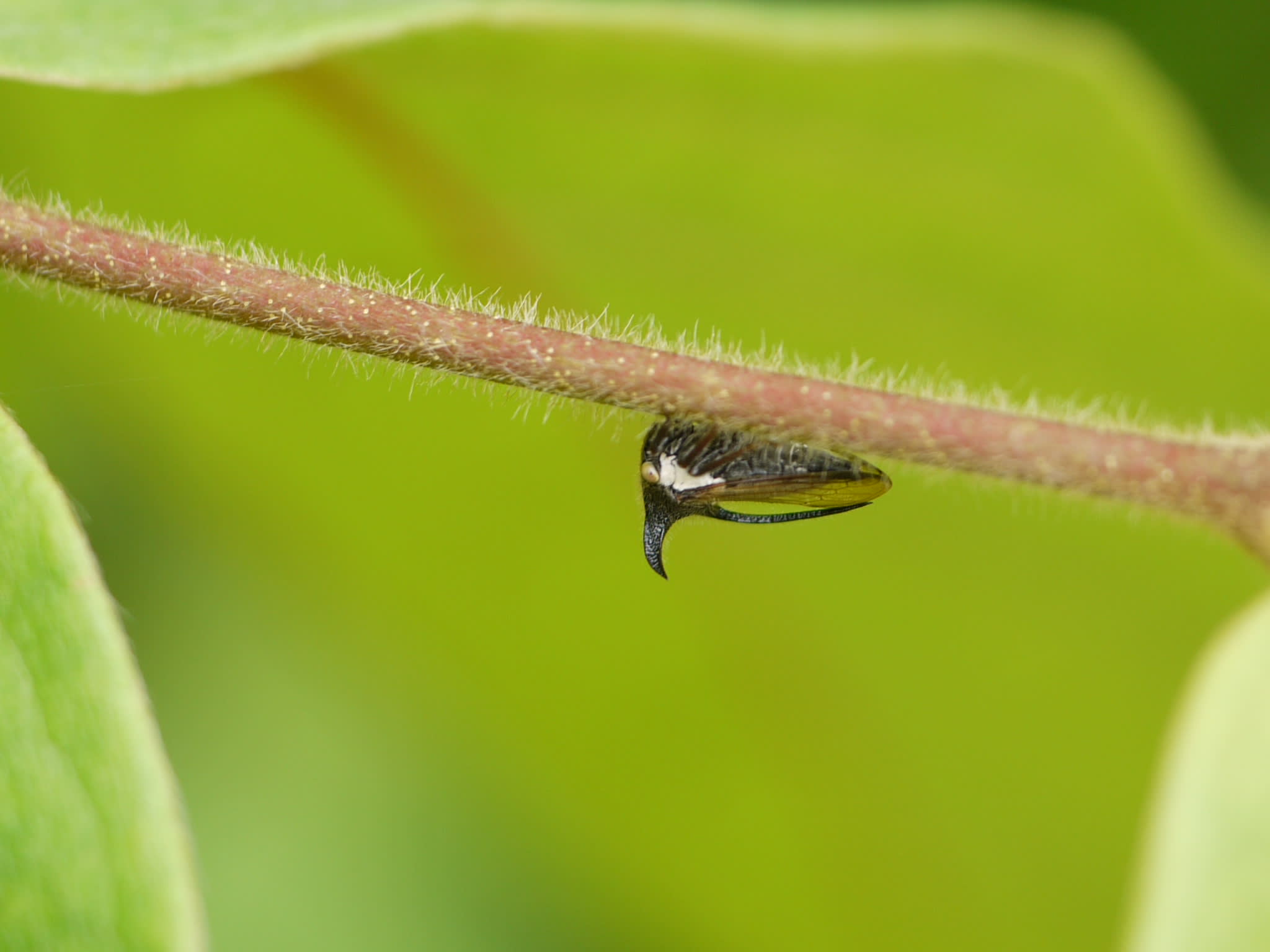 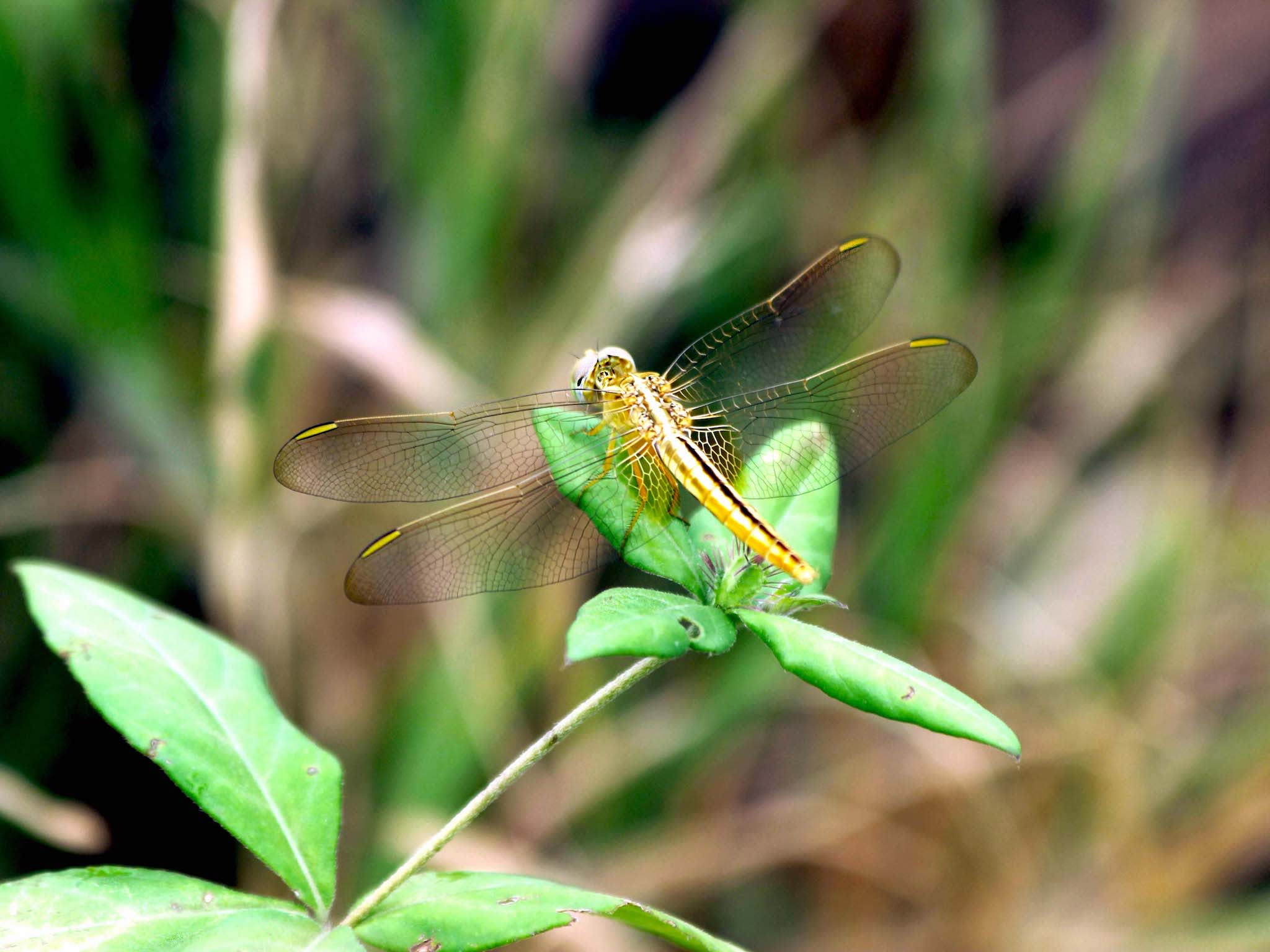 (Left) Horned treehoppers are among the numerous insects that had made the garden their home. The treehopper is thought to mimic a thorn to stay safe from predators. (Right) A ruddy marsh skimmer dragonfly (Crocothemis servilia) is often seen close to habitation especially near ponds, ditches and their surroundings . Photo: Dinesh Valke from Thane, India / CC BY-SA 2.0 (left), Sanjay Basak (right)

Insects not only pollinate flowers, recycle nutrients and help maintain soil fertility, but also sustain creatures, such as birds, frogs, etc, that feed upon them — they are the foundation for life. While the human impact on large mammals has been talked about, it is only recently that the precipitous decline in the population of insects has hogged headlines.

To some extent, home gardens can counter this. A study published in Diversity found “a large number” of insects — 2185, from 10 orders — in 50 domestic gardens in Bangalore. The insect diversity increased with the variety of vegetation and more numbers were found in patches with less weeding and pesticide use. The wilder the garden, the more welcoming a habitat it is — even if it is in a densely populated neighbourhood. This is why environmental groups advise people to not mow lawns.

In heavily built-up environments like cities, any exposed patch of soil, however little, can grow wild if left alone. In this picture numerous species are growing from a seemingly abandoned flowering pot. Photo: Sanjay Basak

For city-dwellers, nature and conservation might seem remote — something to experience in a forest. But cultivating a garden brings nature right to your doorstep. Watching a ‘dropping’ metamorphose into a butterfly or a spider shoot silk strands can be as thrilling as sighting an elephant lumbering along a riverbed — at significantly less expense and stress to the ecosystem.

And within these seemingly hostile environments, we can nurture pockets of flourishing diversity, even if it is barely visible. As James Barilla writes in My Backyard Jungle, “I find myself wondering how cities can be engines of death and despair, and yet be such rich and diverse habitat at the same time. Are we talking about the same cities? Are we talking about urbanisation as it currently exists or as it could be? Might we find a different version of this story in the untapped potential of our own backyards?” 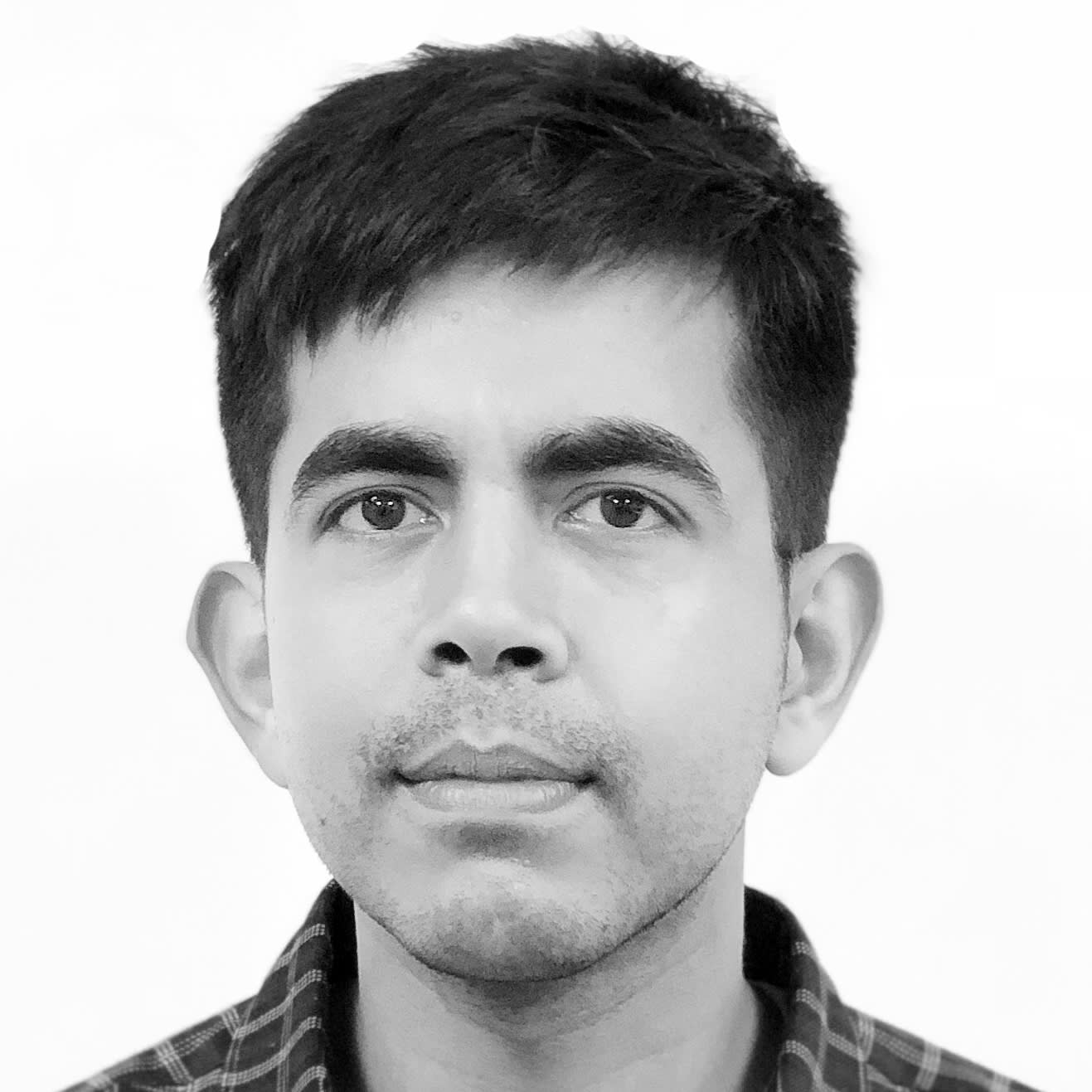 writes about culture, travel and nature. He is on Twitter at @saadsye.