A Forest of Folklore: Myths, Gods, and the Many Faces of the Tiger

How culture, traditions and gods of the Sundarbans are inseparable and intertwined with the forest and its most charismatic creature the swamp tiger

Whenever I mention the Sundarbans to my acquaintances in Delhi or Kolkata, I am asked whether I have seen the tiger. The royal Bengal tiger, indeed, signifies the Sundarbans, and the idea that it hovers within the jungle is what the world associates the place with. But, alas, in my numerous trips to the region, I have only witnessed pug marks the animal left behind on soft clay. When I say so, the next set of curious questions is presented: “How is the forest? Can you enter it? Isn’t it very dense?”

The word “Sundar Ban” means “a beautiful jungle” in Bengali. Perhaps, the name comes from Sundari trees (Heritiera fomes) present all over the forest. A stunning landscape with narrow creeks and a dense green canopy, this is the largest mangrove belt in the world. It spreads across 25,000 sq km in India and Bangladesh. The forest was declared a UNESCO World Heritage site in 1987. The ecosystem here is fragile because of constant erosion and loss of land area on the islands. The identity of the region is deeply intertwined with the grand forest, its majestic tigers, and diverse wildlife.

The Sundarbans within Indian borders stretches across 9,000 sq km. It includes areas of the North and South 24 Parganas districts in West Bengal and is bounded by the Ichhamati-Raimangal River to the east, the Hooghly to the west, and the Bay of Bengal to the south. To the north, is the imaginary erstwhile “Dampier-Hodges Line” drawn in the early 19th century to demarcate the colonial government’s estate. Three broad zones exist from west to east, each defined by major rivers, and the north-south corridors of rail and road connectivity that reach Kolkata. The western Sundarbans, beyond the Matla river, seems to be more “sanskritised” with people adopting higher caste rituals and practices, than the eastern part. Also, there is a north-south distinction. The areas situated in the south towards the forest, or the “down” areas, are colloquially called “abad”. The social practices here are different from the uplands in the north which are closer to and far more influenced by the mainland. 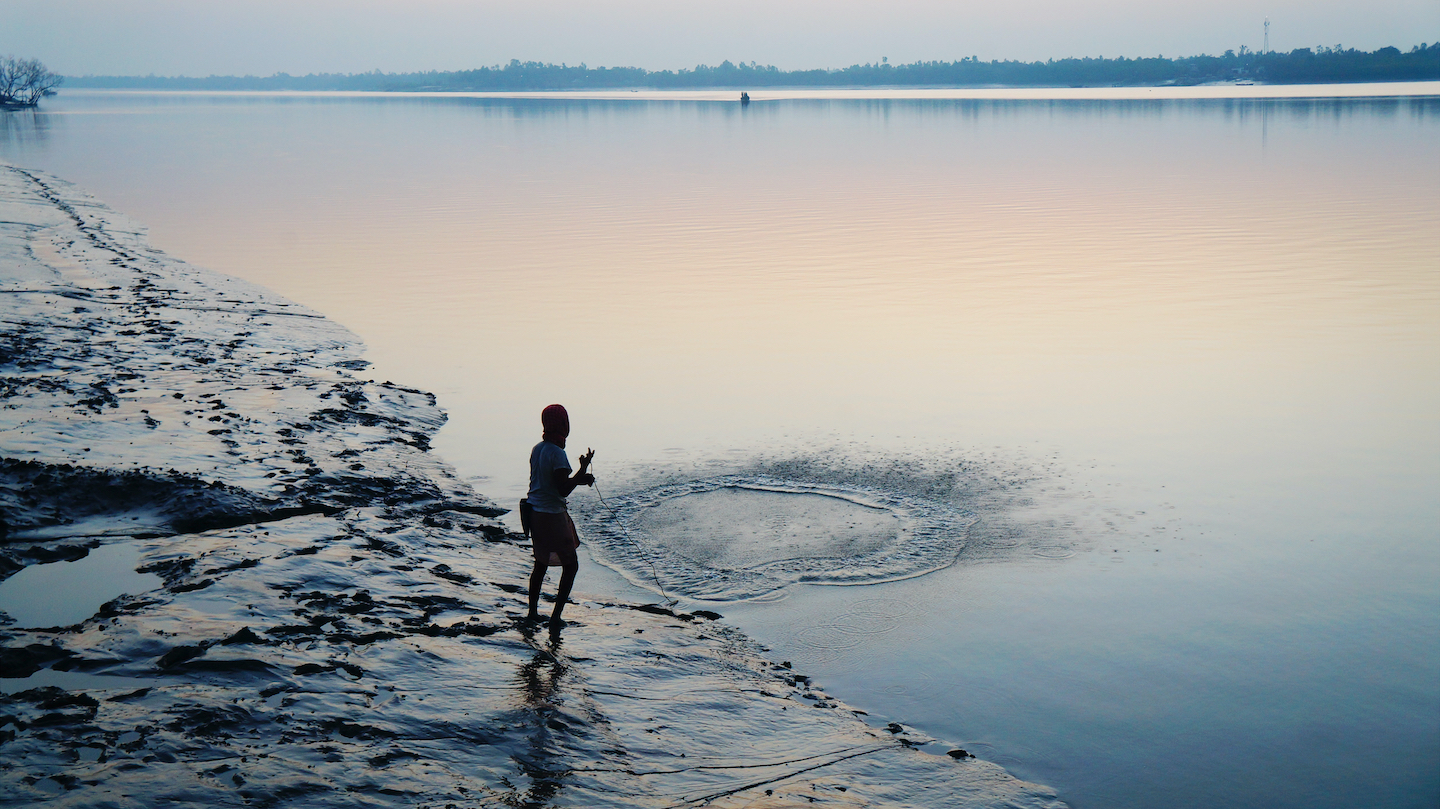 A fisherman hopes for a sizeable catch as he casts his net in the Datta river near Pakhiralay town. Fishing is major source of livelihood for communities living in and around the Sundarbans National Park. Photo: otorongo/Shutterstock A mysterious swampy land filled with intrigue, the Sundarbans is the only mangrove forest in the world that hosts the Bengal tiger. Cover photo: Upamanyu Roy

As per the 2011 census, the population of the region was about 4.5 million with a steep 26.5 per cent population growth since 2001. In general, inhabitants are economically poor living primarily on natural resources around them. Here, identities and communities cut across religion and caste, and are intertwined with their occupation and relationship with the forest. “O jangal kore…”  — that is how locals refer to someone living off the forest. These are largely marginal workers from the lowest of the social strata — the wood-cutters (bauley) and honey-collectors (mauley). Fishing is an important livelihood here. Also, occupations like prawn-seed collection (meendhara) and crab collection from rivers and rivulets of the region are usually taken up by women and old men. All of them face threats at work from tigers, snakes and crocodiles. Local people of the Sundarbans thus tend to fall back on divine powers and myths to save them from such dangers lurking at each stride of their lives.

Nature in general, and the forest and the river in particular, are what the locals draw sustenance from, and paradoxically, those are the very things from which people want to be protected. The lower Bengal belief system, of which Sundarbans is a significant region, assimilates nature with rituals and myths. The people worship plants and animals, and customs related to rivers, ponds, rain, harvest, and forest are common here. Myths are constructed and rituals are performed accordingly. Mythologies are of a subaltern type, created from a life lived on the margins of society. Everyday challenges are woven into the myths, narratives, and rituals of the community. They narrate how the “weak” are empowered often through divine interventions to withstand the might of tigers and other creatures of the forest.

In some parts of the Sundarbans, Bonbibi is dressed like Goddess Lakshmi (left), and in others like a sufi saint. Dakkhin Rai takes many forms in this region — from a tiger-demon who rules the jungle to an idol or a king (right) and saviour of his devotees. Photos: Dr Suptendu P Biswas

Many Faces of Dakkhin Rai

The tiger in the Sundarbans is an inseparable part of the local psyche. It is feared, especially by those who venture into the forest to fish or collect honey. Every year, official figures state that at least 10-20 people who enter the forest are killed by the tiger. Locals claim the numbers are much higher. To appease the animal, people seek supernatural help. Perhaps the tradition of animal worship started when the British brought communities with tribal origins from the Chhotanagpur Plateau to clear parts of the forest in the Sundarbans. They eventually settled here. Later, with the coming of different communities from the mainland, the human-form of the animal was adopted as a folk deity, gradually replacing the “animal-god” by “god of animals”. Two popular gods of tiger I have observed here are Dakkhin Rai and Bonbibi.

Dakkhin Rai, the lord of the tiger and a significant folk deity, is an extremely intriguing phenomenon. He is depicted in the tiger-form in some places and human-form in others. Legends of Dakkhin Rai have been narrated in the punthi literature, namely Raya-mangal written in late 17th century following the Mangal Kavya (literary meaning “Poems of Benediction”) tradition. The myth talks about a woodcutter and his brothers who were cutting trees in the jungle to make boats so that their master could start a voyage. Seeing the destruction of the forest, an infuriated Dakkhin Rai summoned his tigers to kill the miscreants. The woodcutter then prayed to him and offered a sacrifice to please Rai and eventually got the life of his kin back. Upon their return, they shared the story of Dakkhin Rai’s  godly power, so that anyone in danger could seek help from the lord. I find it very interesting how the forest, environment protection, wildlife, transportation, occupation etc. are intermingled together through a popular local narrative.

I have seen two completely different types of deities of Dakkhin Rai in this region. In the “down” islands, he is the tiger-demon controlling the jungle. On the contrary, he is a god-like figure and a saviour for his devotees in parts of the uplands, where he was believed to be a landlord, king, army chief, or brave hunter protecting local villagers from tigers. Another myth suggests that Dakkhin Rai was the son of Shiva. When the head of Ganesha was severed from his body, it fell in the southern (dakshin) direction to become the deity of Lord Dakkhin Rai, known as Dakknineswar in some areas of the Sundarbans. I visited a unique temple of his in Dhapdhapi in the South 24 Parganas district around 35 km away from Kolkata. In the absence of any “original” mantra for him, gradually his mythology has been constructed around both Shiva and Ganesha and accordingly, priests developed certain mantras and rituals as well.

A folk performance known as Bonbibi pala underway at Gosaba block in South 24 Parganas district. The tradition has survived over the years solely through oral and hand-written manuscript tranfers across generations. Photo: Dr Suptendu P Biswas

Bonbibi: The Lady of the Forest

Over time, Bonbibi, the “Lady of the Forest”, has emerged as the symbol of the Sundarbans’ own folk deity and is ingrained into the rituals and lives of people in the “down” islands. She is revered as the protector of the forest and every living being in it. The mythology of Bonbibi started spreading when in the 19th century, Sufi saints came to the Sundarbans and the process of religious exchanges started. Different versions of Bonbibi Johurnama, the mythology, were written during the last two decades of the 19th century. Since then, the Bonbibi cult gained popularity gradually replacing Dakkhin Rai in the eastern part of the Sundarbans. Her legend has two parts to it. The first describes how Bonbibi along with her brother Shah Jangli, both sent by God, came from Mecca to the Sundarbans and fought with the tiger-demon, Dakkhin Rai, and rescued people. The second part eulogizes how she had saved a hapless child from the clasp of Dakkhin Rai, who then promised not to cause harm to any devotee of Bonbibi.

Bonbibi’s idol has different looks in different places. In Muslim dominated areas, her deity looks like an aristocratic Muslim lady, and in Hindu areas, she resembles a traditional Hindu goddess. Puja happens in different spaces: in individual houses, in groups before going to the forest, and within communities who usually share similar occupations. Bonbibi rituals symbolise a syncretic tradition outside the conventional Puranic or traditional customs that originate from Hindu scriptures. Worshippers chant colloquial verses without the help of any “divine” language. Although Muslims are not in the practice of offering prayers to any idol, they too pray in their own way to Bonbibi before entering the forest. Survival instinct, it seems, overarches mainstream religious practices in this case. Small Bonbibi shrines are found at the edge of the forest, and locals tie red flags here while entering the forest to seek the protection of the goddess. In a wider sense, Bonbibi is the spirit of the forest, personified in a feminine form. The folk interpretation was perhaps inspired from the Puranic Shaktism, a form of Hinduism that worships the female version of the divine or the “Devi”.

‘Bonbibi-r Upakhyan’ (the Story of Bonbibi) is a popular folk performance (Pala in Bengali), based on her mythology. Scripts are usually handwritten and the narrative is essentially centred around Jahurnama, a genre of folk literature developed by verbal transfers across generations. I have watched one such act at Dulki in Gosaba block, a village on one of the islands of the Sundarbans. While talking to them, I realised that actors playing Dakkhin Rai and Bonbibi were father and daughter. The group had farmers, boatmen, fishermen, honey-gatherers, woodcutters. Having completed their day’s hard work, they came by boat to stage the show. After the performance, they sailed back through the dark winter night to their homes in different villages. They believed that spreading the greatness of Bonbibi was their way of pleasing the goddess, who, in turn, would protect them.

In the Sundarbans, rituals and livelihood, river and forest are inter-connected and the culture is derived from multiple relationships between five key components: religion, ritual, narrative, occupation, and nature. Undoubtedly, the tiger is at the centre of it all, an omnipresence I could sense even in its absence. 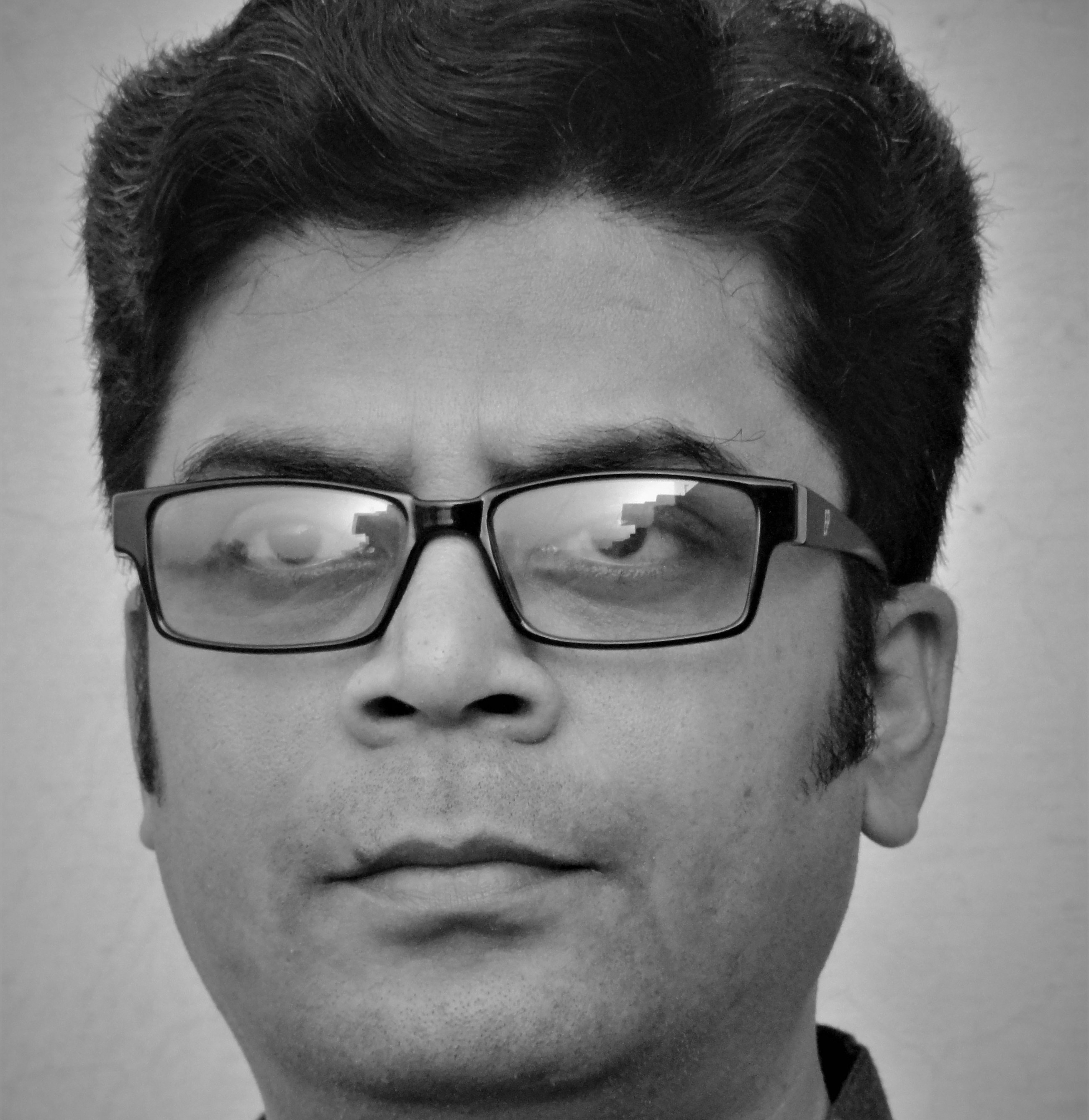 is an international award-winning architect, urban designer, and planning professional engaged in practice, teaching, research and writing, based in Delhi.