Anatomy of a King Cobra Rescue in Agumbe

Witnessing a kalinga snake being rescued, it becomes apparent that communication and cooperation are essential to conservation

I had been in Agumbe for a little over two days and was hoping to catch the famed Agumbe monsoon. It was the time of year when the sleepy town of the TV series Malgudi Days is transformed into the second wettest place in India after Mawsynram in Meghalaya. Barring a few light showers there was no sign of the torrential downpours I had come to witness.

I was technically two kilometres from Agumbe, at a research station set up by the famous herpetologist Romulus Whitaker. Rom, as he is popularly known, was interested in large, venomous snakes and nothing got larger than the king cobra (Ophiophagus hannah). He had chanced upon this piece of land surrounded by forests and built a research station here.

Set up by the world-renowned herpetologist, and Padma Shri awardee Romulus Whitaker, the Agumbe Rainforest Research Station (ARRS) has been a hub of pioneering research on the king cobra and rainforest ecology. Photo: Vaikoovery - CC BY 3.0 Cover Photo: The longest venomous snake in the world, the king cobra raises its body and extends its hood when it feels threatened. Photo: Gowri Shankar

Ajay Giri, the Field Director of the Agumbe Rainforest Research Station (ARRS) was on his way to attend a rescue call, and asked if I was interested in joining him. I quickly asked him what snake it was, and he replied, “Kalinga”. Kalinga is the king cobra in Kannada. I immediately abandoned my plans of going to Someswara in search of more rain, and joined him. The torrential downpours could wait for now. The call had come from a village near Bidaragodu, not far from Agumbe. Driving to Bidaragodu with Ajay and his team, little did I realise how common these rescue calls are in the monsoon months. The thing that struck me most was the tolerance the locals had towards the largest venomous snake in the world.

This particular king cobra had been sighted numerous times over the last few days, in the vicinity of the house and the surrounding plantation. This morning, the snake — a 12-footer — was seen beside the main building. It had climbed into the rafters, the space between the roofing tiles and the false ceiling, either because it was spooked by humans or had wandered there in search of a rat snake or spectacled cobra. The owner of the house was spooked as well, first having seen the snake a few feet away, and then hearing it move around on his roof. They had immediately called Ajay, asking for the snake to be rescued and released some distance away. There were no second thoughts. There were no thoughts of retaliation or of killing the snake, no baying for its blood. They respected that the snake belonged to the place as much as they did. There was fear, of course, and fear is a good thing when a bite from this snake will almost certainly kill you. 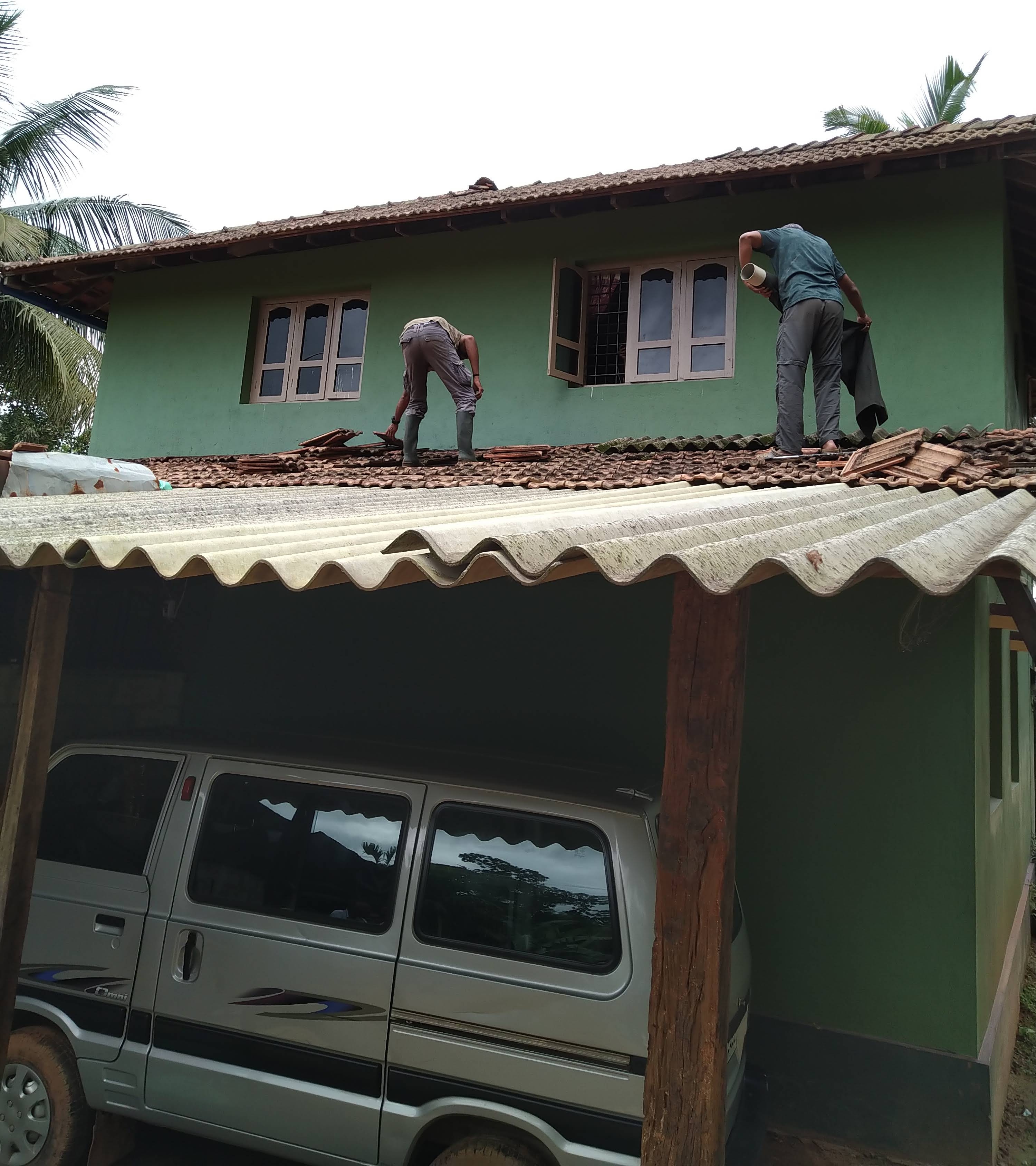 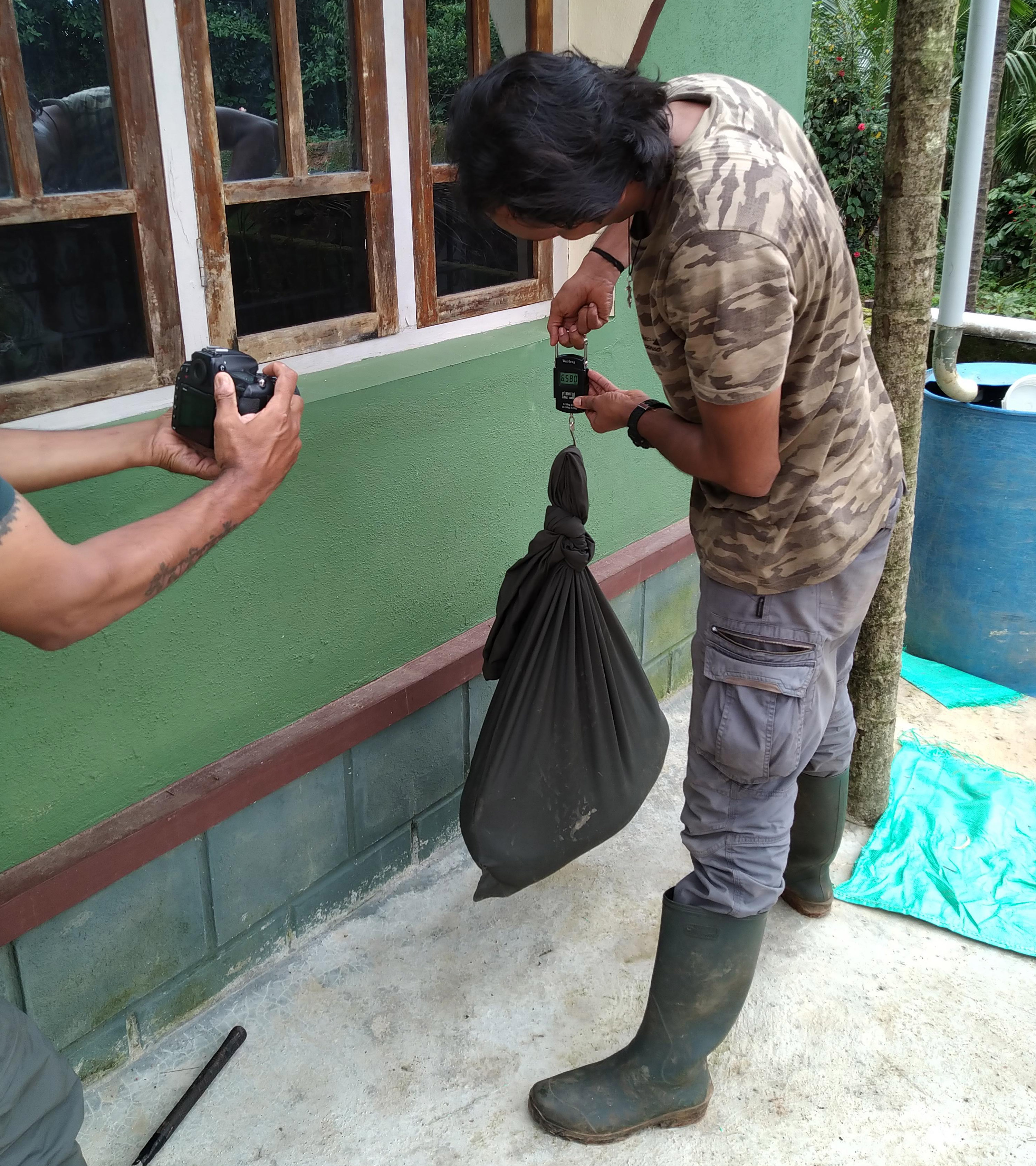 Left: Field Director of ARRS Ajay Giri (left) attempts to locate a king cobra that had taken cover in the rafters of a house at a village near Bidaragodu, close to Agumbe. Right: Always following proper protocol, Ajay ensured that the rescued snake was weighed and checked for tags before being released. Photos: Nisarg Prakash

There’s something about king cobras that sets them apart from other large snakes. Sheer size is one. 12 to 13-foot-long snakes are a common occurrence. But these were only the mid-weights. The large ones can grow to over 16 to 18 feet and weigh close to 15 kg.

When you see a king cobra, it strikes you as a snake that is well aware of its surroundings. Those large raptor-like eyes take in everything. There was something almost bird- or mammal-like about this reptile.

From what I saw of these snakes, from this trip and earlier (I spent a little time in Agumbe a decade ago when the king cobra telemetry project first started), there has never been direct confrontation. The snakes are always looking for a way out when they run into people — inadvertently or when confronted. This is also what I gathered from my conversations with others who’ve spent time following these snakes. 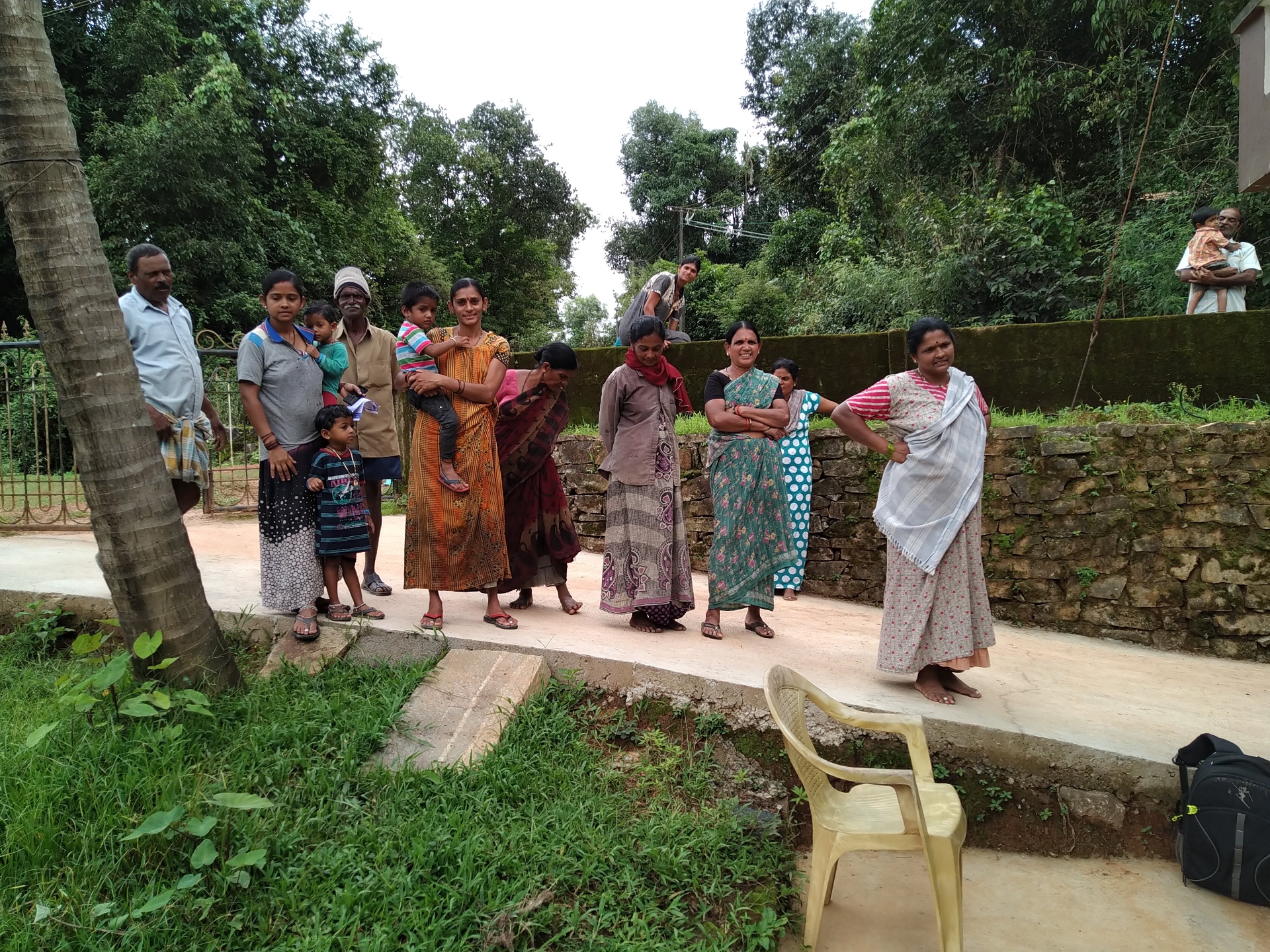 As is often the case when a snake is being rescued, neighbours gather to watch the action. Photo: Nisarg Prakash

Ajay got to work immediately, calmly reassuring the residents that he would find the snake if it was still around. A small crowd had gathered, but they maintained a respectable distance and let Ajay do his work.

Without wasting any time, Ajay clambered up to the roof and started removing the roofing tiles. Watching him work reminded me of somebody who is very sure of his skills, and knows the risks involved. Deftly balancing on a tiled roof while you’re pulling out tiles knowing a large snake might literally be right under your feet requires some confidence.

All the while, he was also making sure people were not alarmed and the snake (which we were yet to see) is not stressed. Soon the snake was found. It was a large male with a blunt tail. Ajay had already set up a snake bag with a large round pipe leading into it. This created a comfortable dark spot away from the activity. A method most experienced snake rescuers use to minimize handling of the animal and the associated stress. The snake was quickly guided into the snake bag with minimal handling.

Ajay explains to local people the homing instinct of the king cobra and why it is important to release the snake close to where it is found. Photo: Nisarg Prakash

I was pleasantly surprised by how effortless it all seemed from where I was standing — a safe distance away. There was not a moment of panic, and everything had gone according to plan and protocol. There was no bravado involved, like we’re force-fed on television and the Internet. The whole activity of capturing the snake had taken less than five minutes. People had only glimpsed the snake during the process of quickly guiding it into the bag.

With the snake temporarily in the bag, Ajay quickly used an RFID scanner to check if this particular snake had been captured and tagged by him and the team earlier. This was a new one. Ajay has been using Passive Integrated Transponder (PIT) tags to mark king cobras, to learn more from subsequent re-captures. A PIT tag is the size of a grain of rice. Vital information like if the king cobra has been a resident of the area, or has moved in from another location, can be inferred through using PIT tags and comparing records. PIT tags are like bar codes, giving each captured snake a unique code that stays with it for life. With the kalinga still in the bag, Ajay got on with filling his data sheets, interacting with the locals/owners to record background information, while also explaining what he intended to do with the snake. There was some clamour for displaying the captured king cobra, but Ajay flatly refused this and explained why the snake should not be stressed. He patiently explained to gathered group why it is important that he release the snake not far from where it was captured. He went on to elaborate more about the king cobra, the snake eater, explaining its diet of snakes and the role it plays in keeping down population of other snakes, particularly the Malabar pit vipers, in populated areas such as this. By the end of the discussion, there was a general sense of ease and approval of the work Ajay and the ARRS team are involved in. The snake was quickly weighed, measured, and marked with a PIT tag in a procedure that took less than a couple of minutes. The residents of the place were invited to witness this procedure. Fear was replaced by admiration and the atmosphere turned almost festive.

The king cobra was released in the vicinity of the village where it was found. Destruction of their habitat is one of the threats faced by this iconic species of the Western Ghats. Photo: Nisarg Prakash

Watching Ajay share an almost unbelievable rapport with all the locals we encountered made me realise how communication is key to conservation. Conversing in fluent Kannada, Ajay was at home here in the heart of Malenad, and I learnt over the next few days, that he was making a serious impact on the lives of locals and the snakes he loved.

From what I had witnessed, the rescue was more about winning people’s hearts and less about handling the snake itself. In a community where tolerance towards large, venomous snakes is already high, the efforts at outreach by Ajay was sure to convince locals to let the snakes share space, and confirmed existing beliefs about the king cobra being a positive influence on their daily lives. Ajay did stress the fact that given its space, the king cobra was not dangerous to people, and most people who had gathered agreed. While the residents were visibly relieved with the capture, there was no guarantee that they would not see the snake again. They understood this and accepted it as a way of life. We quickly left with the captured king cobra and released it not far away, on land that was still its own. Meanwhile, Malabar grey hornbills were cackling away in the canopy, and the skies were still overcast. We now had an empty snake bag and Ajay was already getting ready for his next rescue call, to help snakes and the people he loves.