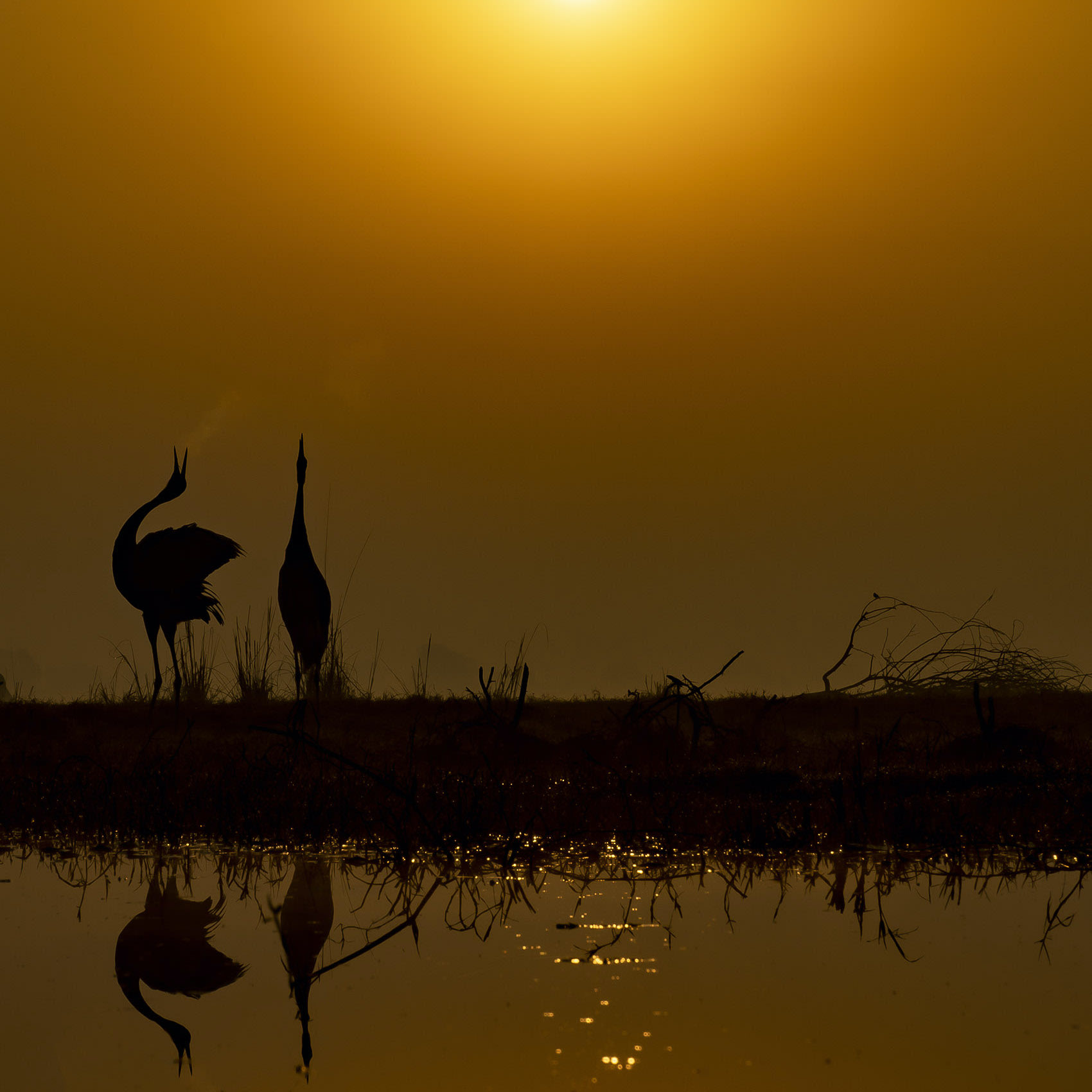 From the mid-1980s to the early 2000s, an annual (if not biannual) two-three-day visit to the Keoladeo National Park (aka, Bharatpur or simply the Ghana) was almost de rigueur. For anyone cutting their teeth into birding, there was no better place to be. Like all star-struck birders, our main aim was to have darshan of the graceful – and increasingly rare – Siberian Crane, whose numbers year on year were falling ominously. They’re tall dignified birds (140 cm), snow-white except for jet black primaries and a red mask extending from the bill to behind the eyes. Their eyes are yellow, the legs reddish. We only realised how privileged we had been when, in 2002, the numbers dropped to zero and have remained that ever since. No one visiting Bharatpur now is ever going to see those birds again. They had formed part of what was called the ‘central’ population and would visit Bharatpur every winter, but over the years were shot to pieces as they over-flew Afghanistan and Pakistan. The “western” population, wintering in Iran is also probably extinct and only the “eastern’ population”, wintering in China has relatively healthy numbers, though they too are threatened by China’s Three Gorges Dam.

As the writing on the wall became clear, a last-ditch effort was made to increase the number of cranes visiting Bharatpur. In 1993, a Russian scientist who had hand-raised a pair of chicks brought them over to the park, in the hope they would join the group of five wild birds that had arrived that year and fly back with them, and consequently return the following winter. But, our killjoy bureaucracy slammed the door shut and said that they did not recognise the quarantine certificates issued to these birds, so they couldn’t be released. Subsequently too, efforts failed. 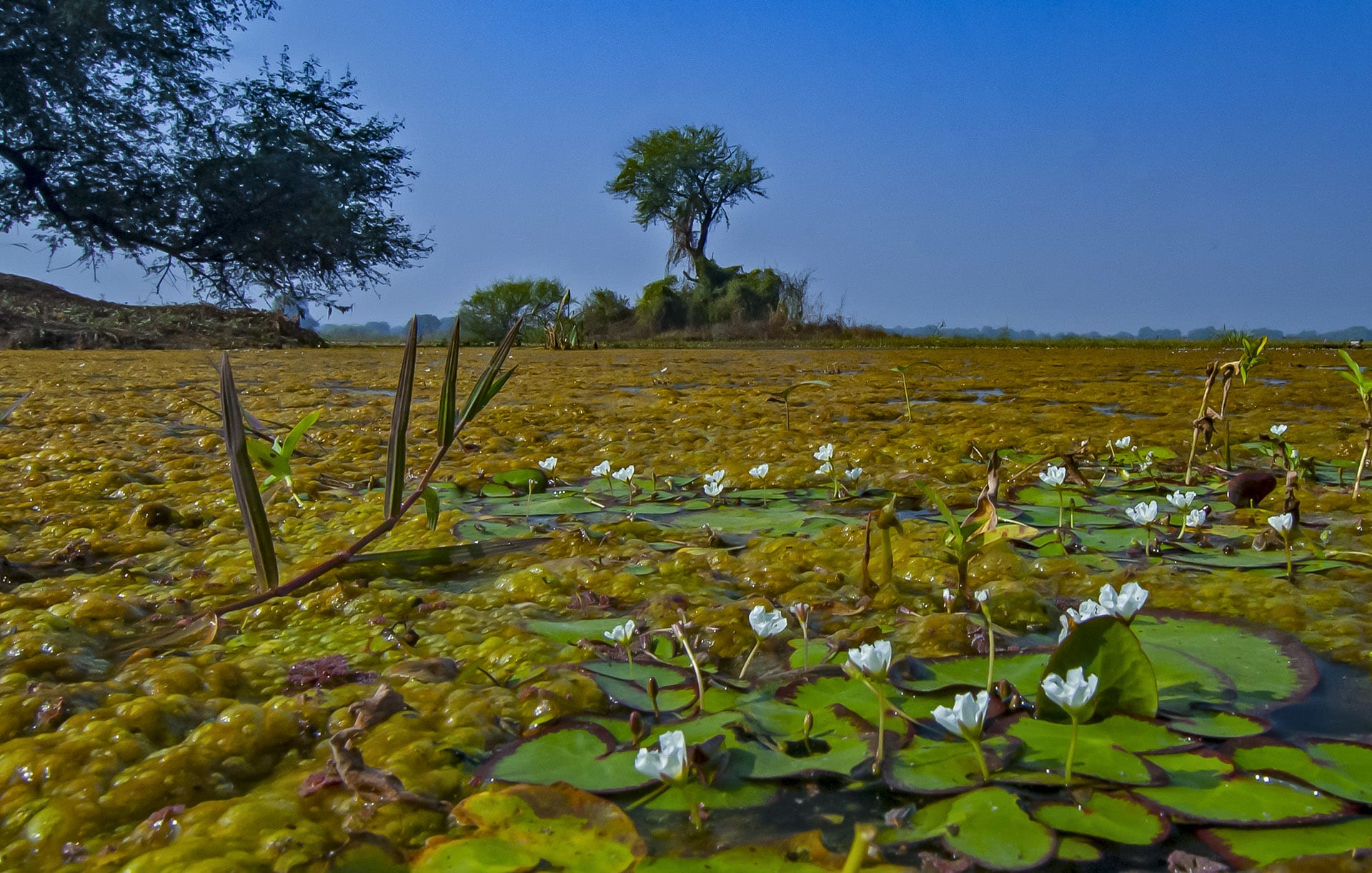 But Bharatpur had much else on offer. On several occasions we arrived along with the winter rains — when it was grey and gloomy, the skies dripping like a leaking faucet. Even though the cold bit into our bones, we soldiered on. And there were treats on offer! On one occasion, a magnificent tawny eagle perched on a bare stump, a few meters away just off the path, hunched in the gloom. Step by step we inched towards it, taking photographs until we reached the base of its tree. It remained sphinx-like and soon we felt a bit foolish, our telephoto lenses rendered redundant. On another occasion, ahead of us on the road, we saw what appeared to be a huge sack of potatoes humping its way ahead — another eagle that eventually took off with a great bluster of wings. And the first time I heard the magnificent Pallas’s fish eagle call, I thought someone nasty had smacked a puppy! On several occasions, we could admire at leisure the magnificent crested serpent eagle, posed statuesquely on a branch or circling high above. 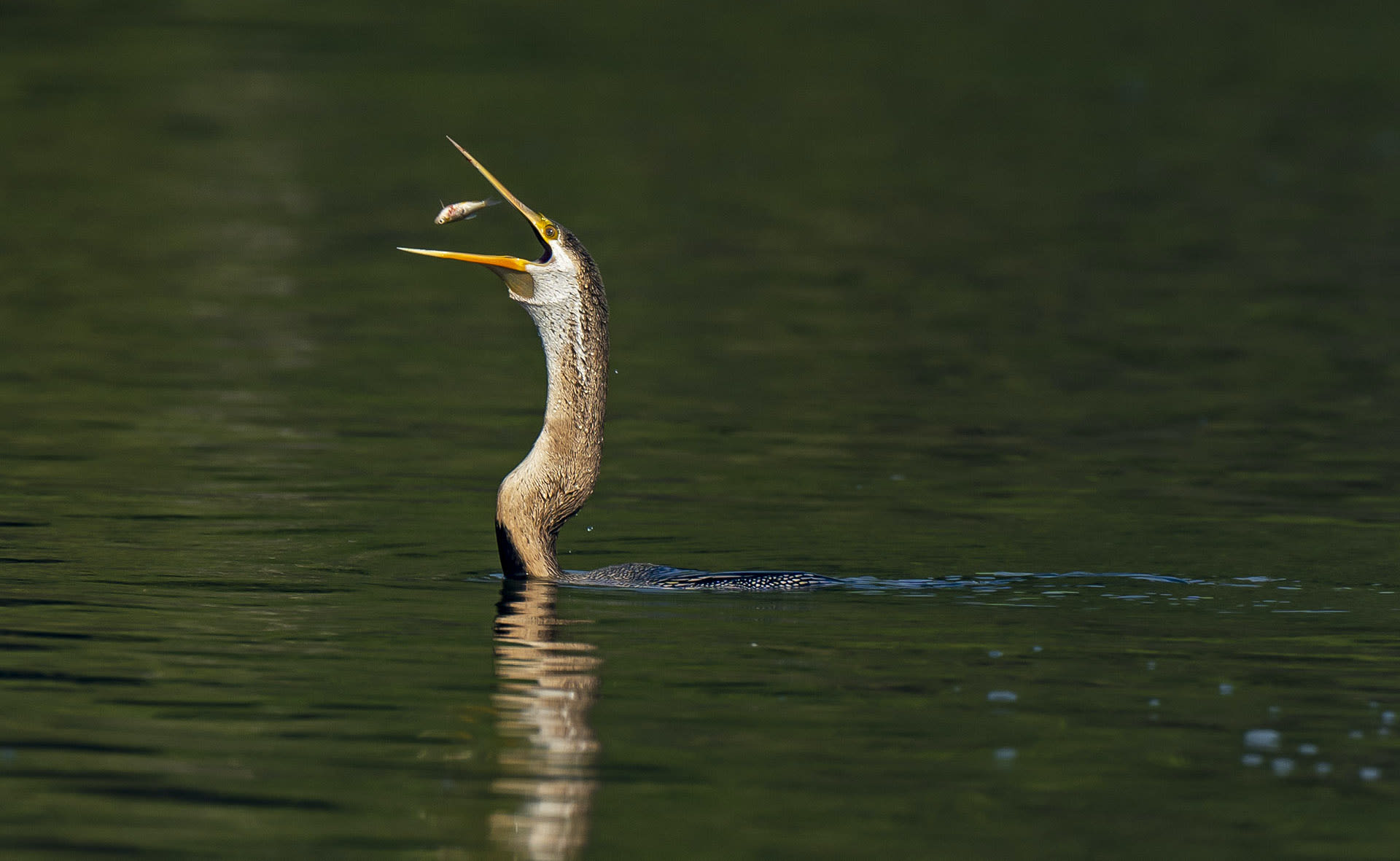 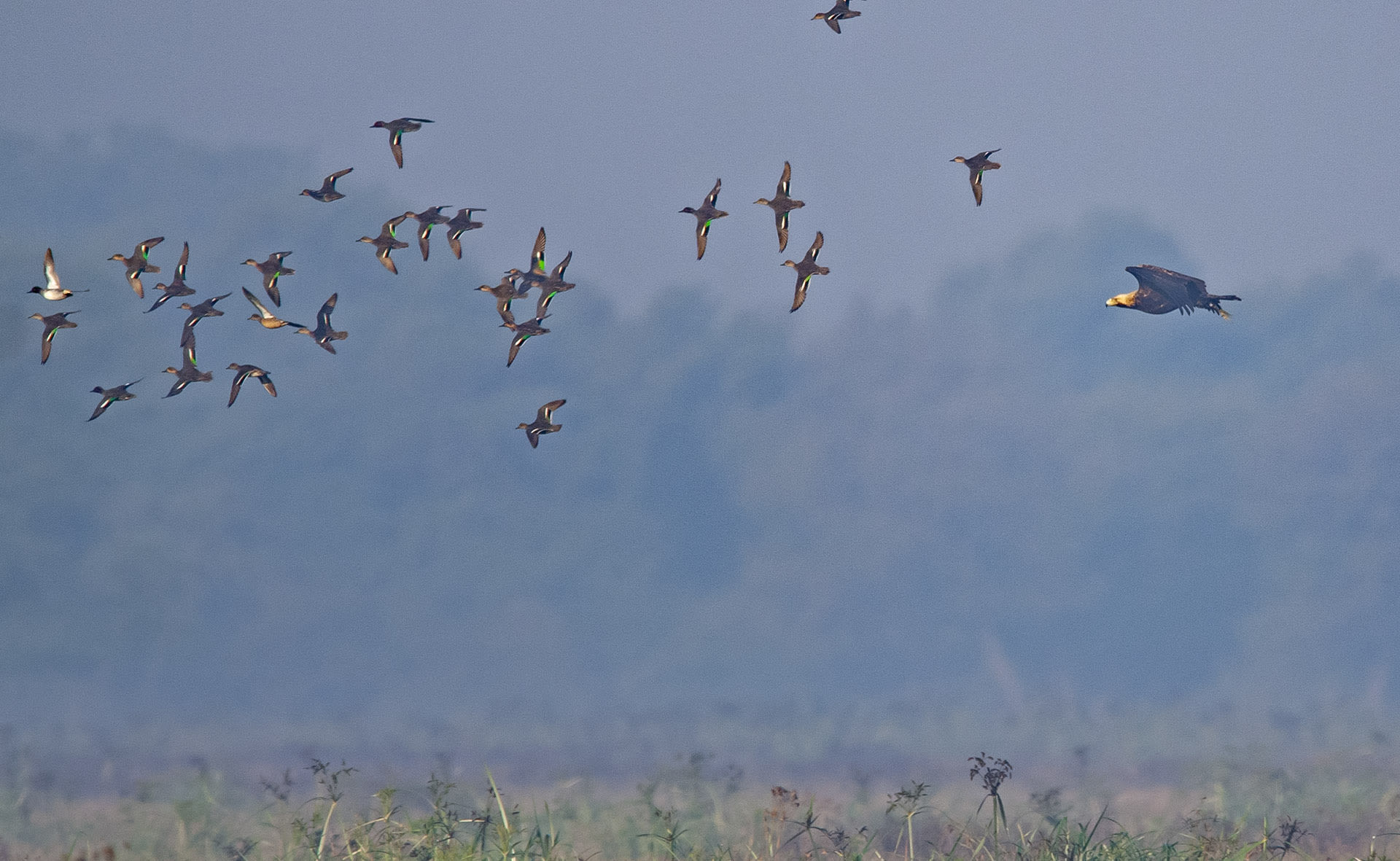 (Top) Bharatpur was the last-known wintering ground in India of the elegant Siberian crane. The number of cranes visiting the park started declining in the 1980s, before the last pair finally disappeared in 2002. (Left) The Indian darter uses its dagger-like beak to spear fish underwater. After securing a catch, the bird tosses the fish into the air and swallows it whole. (Right) Bharatpur is a wintering site for the imperial eagle, seen here in pursuit of a flock of ducks. Prey is available in plenty for raptors and other birds during the winter months. Photos: Kedar Bhide (top), Dhritiman Mukherjee (above)

Of course, waterfowl hogged a lot of the limelight. Behind the screen of trees, you could hear them murmur and mutter in the mist. Inevitably then, a badass marsh harrier would come swinging low like a masked bandit, and a sound like Shrek gargling would erupt from the water as scores of birds flurried into flight. On clear evenings it was a treat to watch the ducks arrive, squadron after squadron of shovellors, pintails, teals, garganeys, red-crested pochards, common pochards e.t al. till they filled the sky and even blotted out the moon. Their wings whistled as they jinked, banked, and tumbled to lose height and land on the water. Even more dramatic were the echelons of geese — greylag and bar-headed that flew over like bomber squadrons — you could hear them murmur from a distance away. On foggy days, it was uncanny how they materialised out of the mist, barely 50 feet above your head, circled the lake they had been heading for, and landed.

Long-legged waders like the black-necked stork would patrol the shallows and stab viciously to disembowel a coot swimming foolishly close as flocks of great white pelicans grinned away or set about on cooperative fishing trips. At the edges of the lakes, snipe would lurk, virtually invisible until they broke cover and snaked off at full speed.

Trips after the monsoons would get us acquainted with the breeding residents of the heronries: painted storks galore (very fastidious about nest hygiene despite their babies looking like scum!), spoonbills, egrets in angelic white with gimlet glares, herons, dignified in grey and silver or beautifully resinous and mauve, darters with javelin bills (whose young were snow white!) and blue-eyed cormorants. And of course, kingfishers in swimming pool colours, just waiting at their posts and grinning. 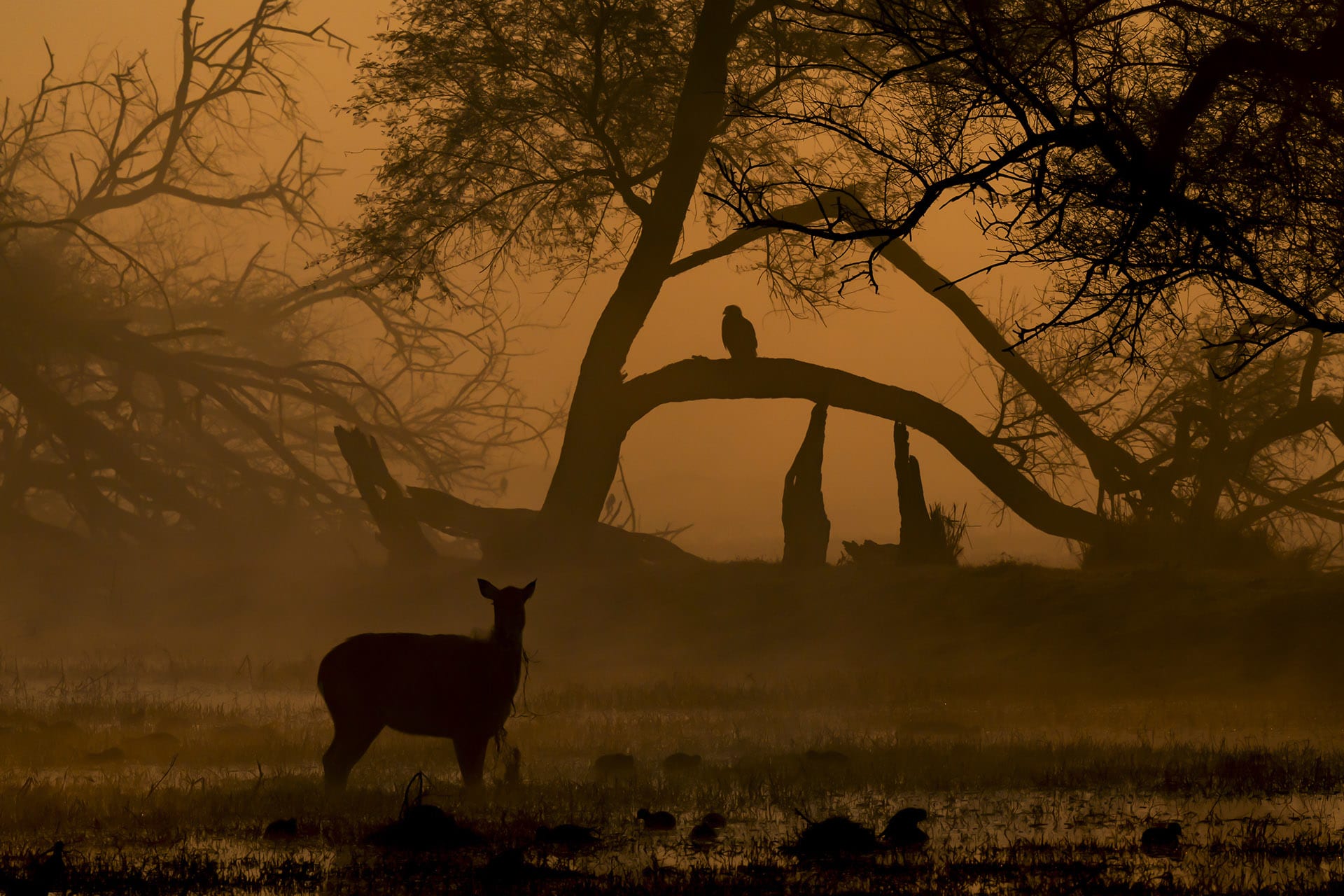 Twilight reveals the silhouettes of a sambar and a raptor in Bharatpur. The rich birdlife of the park continues to attract thousands of visitors to the park every year. Photo: Dhritiman Mukherjee

At the Keoladeo Temple (usually thronging with human visitors), there was a long-established pair of scops owls and it was always a treat to catch a glimpse of the great horned owl at its residence on a safely selected tree in the middle of a marsh. At the bone white-bleached Python Point — a somewhat sinister place — we’d be lucky to see pythons basking in the sun, their varnished bodies as thick as a sumo wrestler’s thigh. We’d tramp and cycle along the Mansarovar, Hansarovar, Sapanmori, and by the Ghana canal all day — remembering that this haven was man-made and was saved from a dreadful fate by Salim Ali. He and a couple of birding friends learned of a plot hatched by disgruntled influential people who had been deprived of their ‘hunting rights’ in 1947 (the maharaja retained his temporarily) and crooked politicians to launch an agitation to use the impounded water and marshes for agriculture. Salim Ali and his friends tipped off Nehru who promptly put paid to the plans. Carnage had occurred here in the past — now the Ghana (and its birds) deserved its peace. Weary from tramping all day, we’d return often by moonlight (or starlight) as from the surrounding marshes, a pair of lovelorn sarus cranes would gaze heavenwards and trumpet their declarations of eternal love for one and all to hear.

Delhi’s Unlikely Stopover: Finding Everything in the Middle of Nothing