Text and photos by: Samuel John 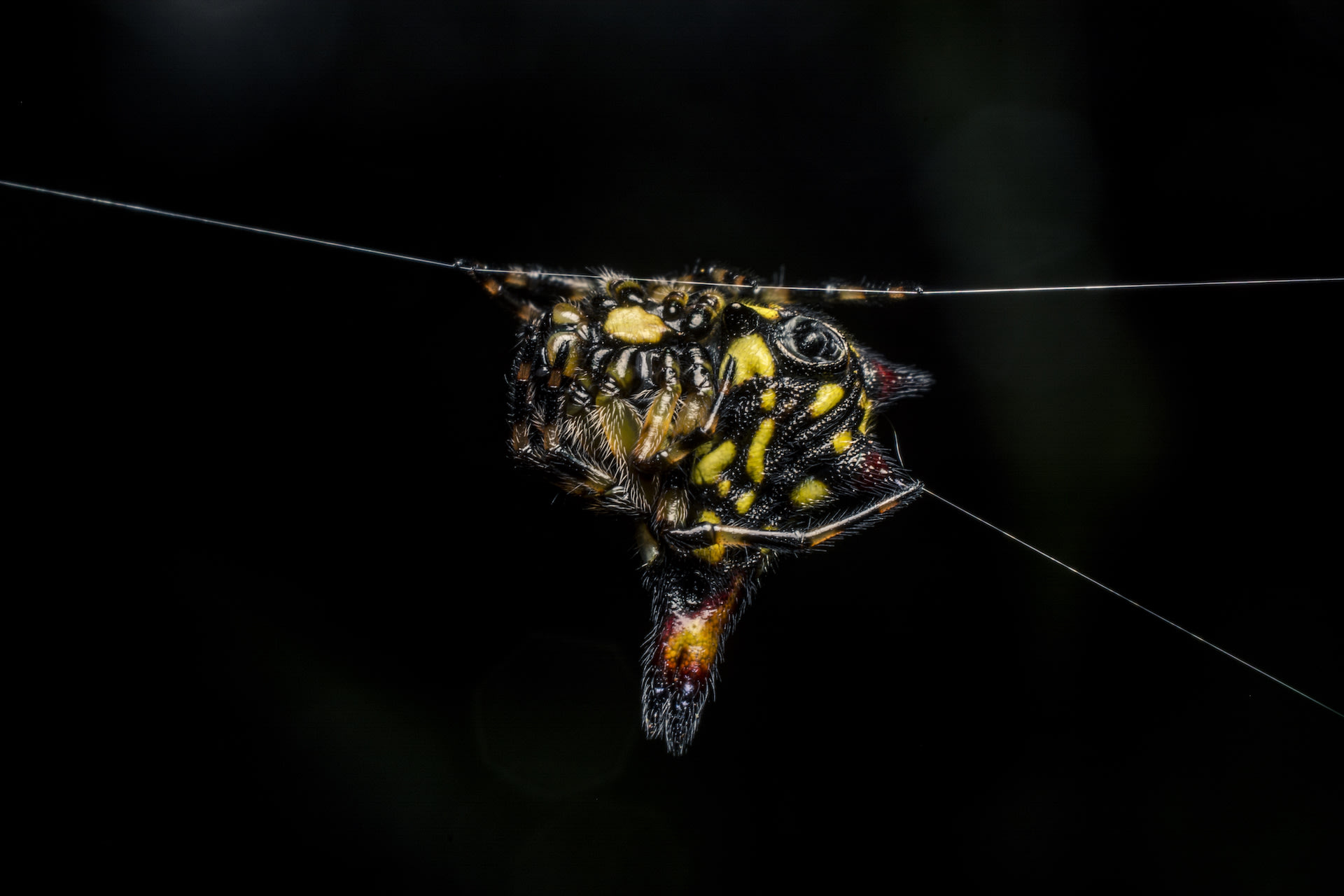 “Why spiders?” It’s a seemingly reasonable question I often get from people who find out I’m in love with them. By the time I finish the long list of things that make them “evolutionary magicians” and “indispensable ecological wonders”, people either fall in love with spiders themselves or avoid me at future social gatherings. One topic that typically inches people towards the former is spider silk. A remarkable natural material that has a wide range of applications for both the human scientists working hard to synthesise it and the spiders that produce it.

The tenacious silk starts as a liquid protein produced by the spider’s silk glands. Each silk gland produces a different type of silk and each gland leads to a specific spinneret that protrudes out of the rear end of the spider. In a process that continues to baffle scientists, liquid silk turns into an elastic solid as it exits the spinneret. After much deliberation and countless hours of staring at a spider’s bottom, we know that the liquid silk exists in an alpha-helix format (ribbon-shaped arrangement of protein molecules) and turns into an insoluble beta-pleated format (proteins molecules arranged in a sheet-like manner). This intriguing combination creates protein crystals that give the web their characteristic strength. If all of nature were a stage, the spider would be a prolific magician, and its spinneret would be the magician’s wand. Among its innumerable applications for humans, spider silk has shown promising results in medical research — from regenerating human tissue to dressing slow-healing wounds. For spiders, the most popular application of silk is the spider web. However, among the 49,000+ species of spiders found around the world, silk is also used in some less popular but equally fascinating ways. 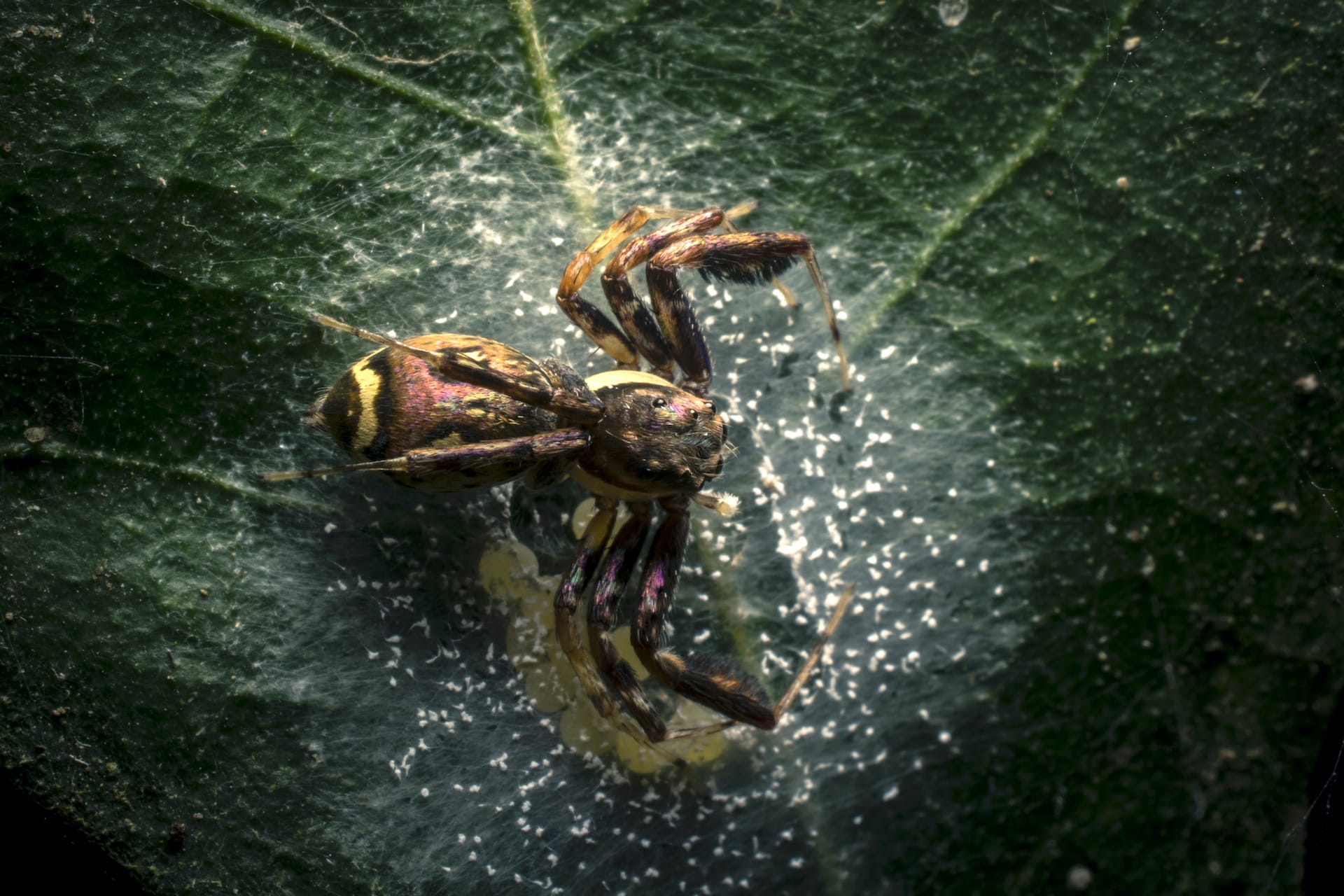 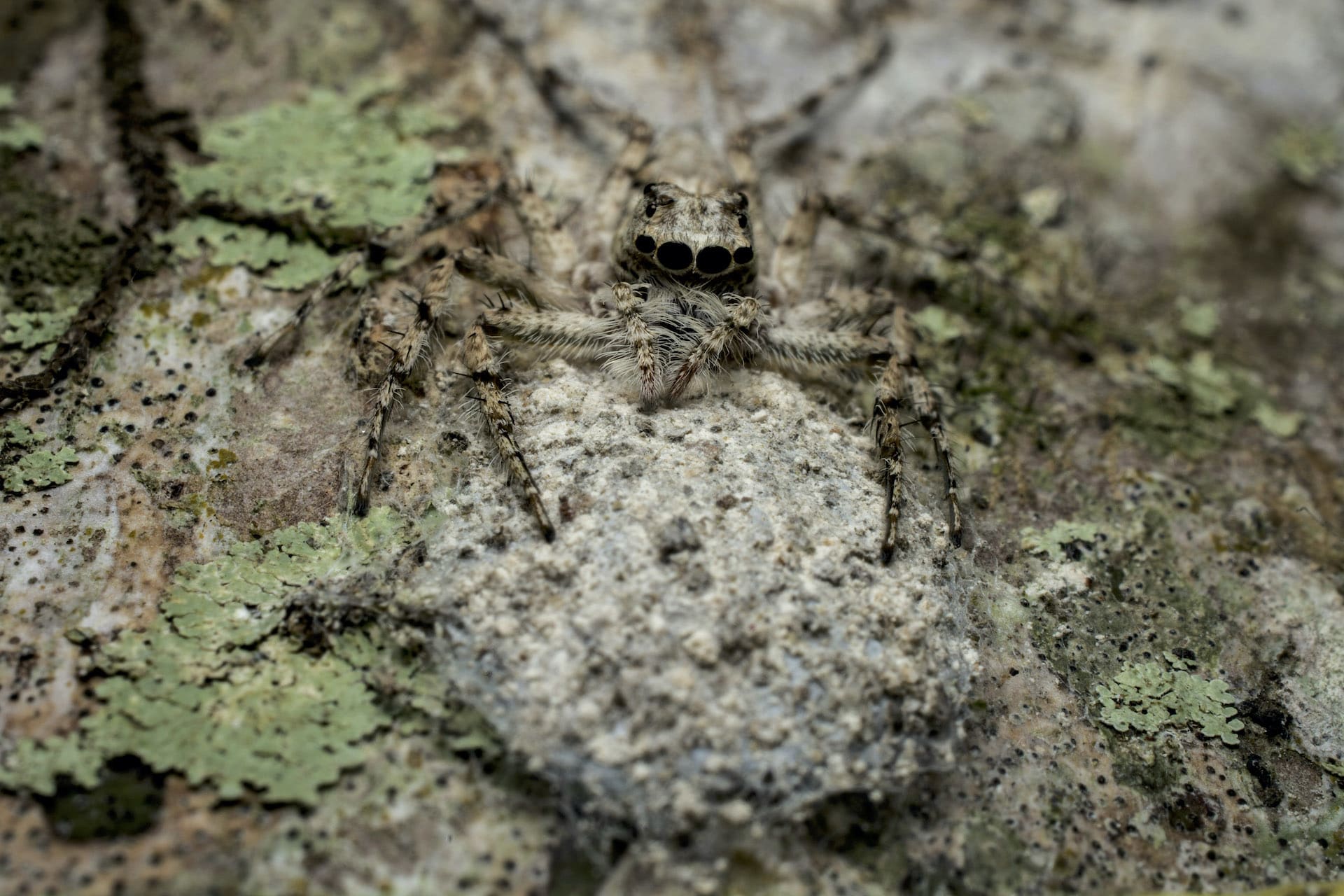 (Left) A Brettus cingulatus is seen on a leaf with her egg sac. (Right) A Phaeacius sp. is seen on the trunk of an areca palm with her camouflaged egg sac. Jumping spiders typically sit guarding their egg sacs against predators and parasites.

When a spider lays her eggs, she ensures that her young are draped in the protective comfort of her silk. The egg sacs of each family of spiders takes on its own spectacular shapes and forms. While spiders in the Uloboridae family construct elaborate silk enclosures that look like thumbnail-sized conch shells, spiders in the genus Pholcus (Family: Pholcidae) wrap their eggs with a few strands of silk and carry them around in their chelicerae (front appendages). The wolf spider (Family: Lycosidae) weaves a more sturdy “mobile” egg sac that she carries with her everywhere she goes. Even within a single family, eggs sacs take different forms to suit their habitat. Among jumping spiders (Family: Salticidae), spiders of the genus Hindumanes create a minimalistic egg sac on the underside of leaves; the eggs are visible under strands of silk. Jumping spiders in the genus Phaeacius build cryptic egg sacs on the trunks of trees that are as secure in their camouflage as if their mother was watching over them.

A male Nephila kuhli (small red spider) is seen climbing down the back of the vastly larger female of species. The male continued to move up and down the length of her abdomen while gently touching her with his spinnerets.

Among spider silk’s many uses, one of my personal favourites is its use in a courtship behaviour called “mate binding”. Despite its 50 shades of web tone, this very relatable courtship behaviour in the golden orb-weaver is centred around the male giving the female a back rub. The term ‘binding’ is a tad misleading because this intricate ritual does not involve tying the female down (he would face pretty serious consequences if he tried!). When a male golden orb-weaver approaches a female (many times his size) to mate, he has to be exceptionally cautious. Depending on her mood, she could either welcome him or reject him in a number of ways — ranging from swiftly kicking him on the head to biting it right off. As a counteradaptation to rejection, a male may give a potential suitor silken back massages to calm her down and increase his chances of mating. He gently rubs her with his spinneret while moving up and down her generous back. These romantic massages also drastically reduce the rate of sexual cannibalism (female eating the male) from a whopping 71.4% to 17.4%. It was widely believed that the silk contained contact pheromones that helped the male woo the female. However, one study demonstrated that the female responded with calmness just as well to back massages when the male’s spinneret was sealed off with super glue (preventing the release of silk). In their natural setting or any setting in which scientists have not sealed the male’s spinnerets with superglue, this process takes places with generous quantities of spider silk. This ritual of love continues to leave scientists and spider enthusiasts pondering the role of silk in this ritual of love. Finding reason in matters of love can be a tricky web to untangle.

Spiders prepare for “ballooning” by climbing up to a high point, standing on pointed legs and releasing lines of silk into the air. Seen here is a spider moments before flying off the author’s finger.

The idea of cannibalism in spiders is not restricted to mating exchanges. Many species of spiders will nonchalantly predate members of their own species. This makes their dispersal a matter of critical importance to prevent fatal sibling rivalry. In the early 1830s, a naturalist of some repute first documented this peculiar means of dispersal. The HMS Beagle had docked about 100 km off the Argentinian coast when a young Charles Darwin noticed tiny spiders boarding his ship. He went on to observe that these spiders extruded strands of silk from their spinnerets continuously until an abrupt take-off. In a process called “ballooning” spiders release silk from their spinnerets until the spider can take off and fly using the electrical charge in the atmosphere. The spider achieves this magnificent feat by leveraging electrostatic force. The earth’s surface carries a negative electrical charge as do all things that exist on the surface (they are earthed). As a spider releases negatively charged silk, electrostatic repulsion kicks in and the spider bolts into the air, surfing a wave of electricity. Behaviours like ballooning often lead me to contemplate our ideas of intelligence and sentience. We have done some remarkable things as primates from solving very complex math equations to escaping gravity and reaching the moon. But I would argue that a group of millimetric individuals that use the hair on their legs to study the prevalent electric charge in the air and use it to fly hundreds of kilometres, are at the very least performing an equally impressive feat!

While these are a few intriguing applications for silk that you may see around you, the full list of documented uses is long as it is mindboggling. The next time you come across spider silk on a walk or while cleaning your home, take a moment to appreciate nature’s imagination at its silky best. 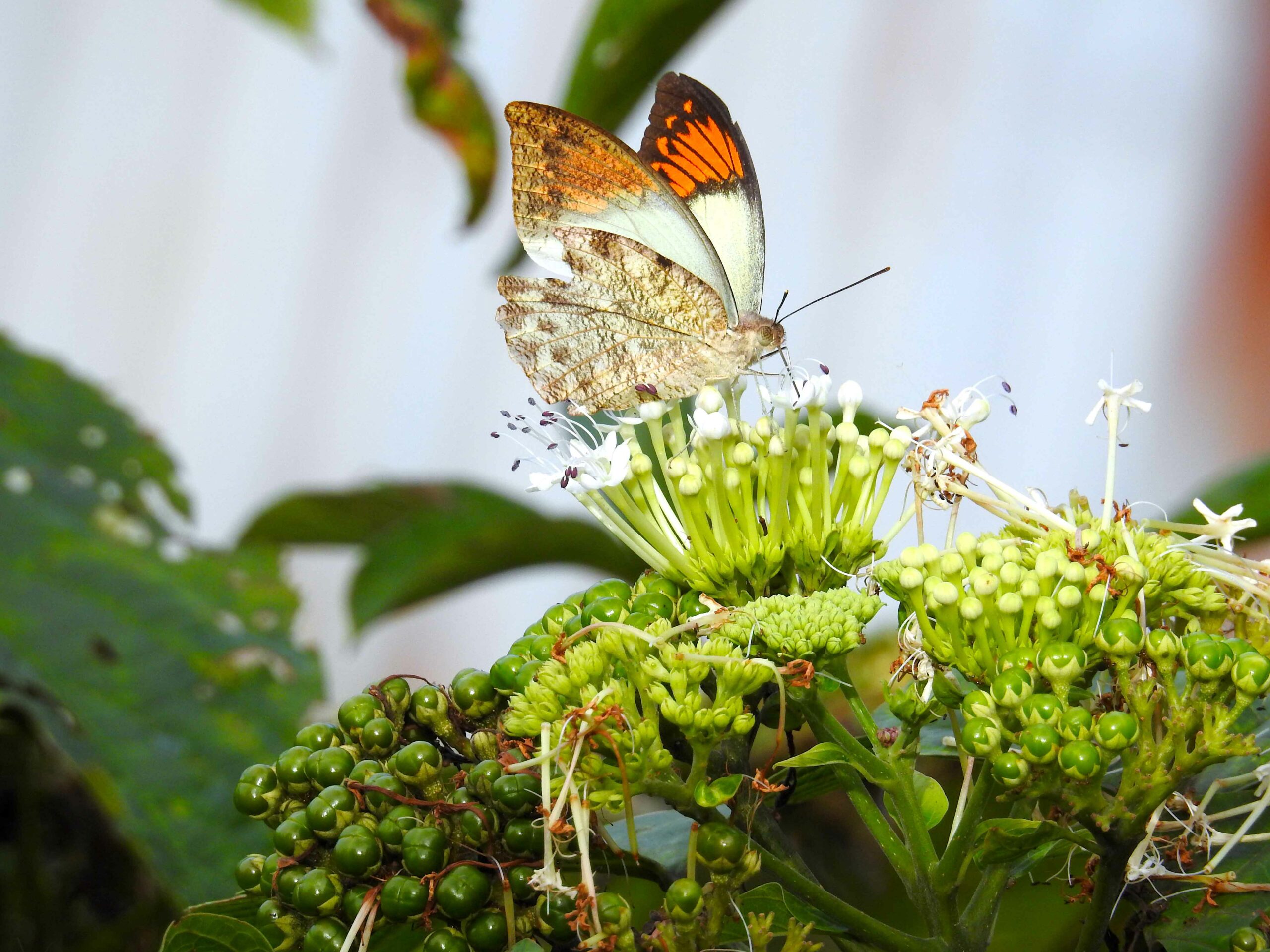